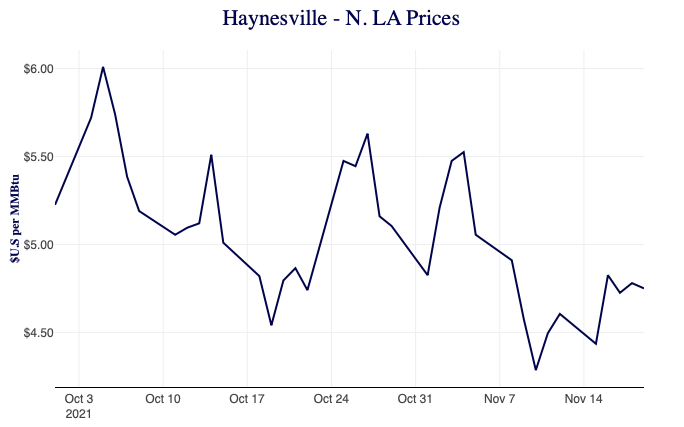 Paloma, an affiliate of EnCap Energy Capital Fund XI LP, plans to launch a tender offer to acquire for $23/share in cash all of Goodrich’s outstanding common stock.

Goodrich operates primarily in the Haynesville Shale. The board has unanimously approved the offer price, which represents a roughly 7% premium to Goodrich’s closing price last Friday (Nov. 19), management said.

The tender offer is expected to be completed in December “and followed promptly by a second-step merger,” the company said. “Upon completion of the transaction, Goodrich will become a privately held company and shares of Goodrich common stock will no longer be listed on any public market.”

Private equity has been pouring into the Lower 48 oil and gas patch as publicly traded names have maintained capital discipline despite rising commodity prices.

The gassy Haynesville, which extends from East Texas into Northern Louisiana, in particular has seen a surge in activity from private and public companies alike.

“Due to the current oil price environment, Goodrich is concentrating the vast majority of its exploration and development efforts on natural gas on its existing leased acreage in the core of the Haynesville Shale in North Louisiana,” the management team said.

The Haynesville is expected to post the largest month/month natural gas production increase in December of the seven main shale basins tracked by the Energy Information Administration in its monthly Drilling Productivity Report.

Natural gas production from Texas and Louisiana is expected to exceed pre-pandemic growth forecasts through 2024, according to the latest annual Gulf Coast Energy Outlook published by the Louisiana State University Center for Energy Studies.

Goodrich reported capital expenditures of $27.9 million during the third quarter, “of which nearly all was spent on drilling, completion and facility costs associated with Haynesville wells,” said COO Robert Turnham during an earnings call earlier this month. “We continue to seek and review additional bolt-on opportunities to expand our 32,00-acre footprint through additional acquisitions and drill-to-earn farmouts,” he said of the Haynesville.

“To date, we’ve only seen a small amount of service cost inflation, and our economics…are as good as we have seen them in the basin.”

As for the firm’s exposure to natural gas prices, CEO Gil Goodrich told analysts that the “current hedge position provides substantial downside protection while also giving us substantial exposure to higher unhedged prices as we execute our 2022 plans.”

Goodrich produced 166 MMcfe/d (99% natural gas) during the third quarter, up from 125.5 MMcfe/d in the year-earlier period.

Management cited a one-time hedging loss of $64.9 million in 3Q2021, “due to the change in fair value of unsettled derivatives not designated as hedges as futures prices for natural gas rose during the quarter.”