The forecast for natural gas prices is giving Goodrich Petroleum Corp.’s executive team a reason to build its growing leasehold in the Haynesville Shale, executives said during a second quarter conference call. 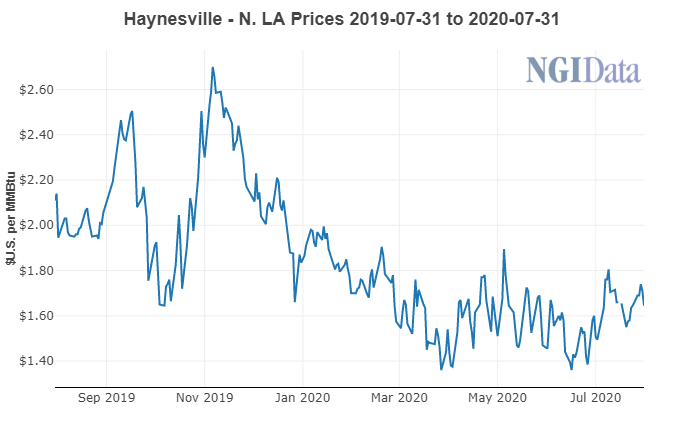 CEO Gil Goodrich was joined by President Rob Turnham to discuss the results with analysts during a recent conference call. The No. 1 goal is to ensure the balance sheet is strong, the CEO said. However, there are some enticing possibilities in North Louisiana, where the company is focused.

“In fact, with the current development cost and a calendar year strip for natural gas now at approximately $2.75, our forward-looking rates of return payback periods and margins are as attractive as they have ever been.”

The 2021 calendar year prices “look quite good,” but current prompt month prices of around $2/Mcf have led the company to halt finishing three drilled but uncompleted wells, i.e. DUCs. Depending on the direction of gas prices, higher volumes are forecast for the final quarter.

Even though it is keeping its DUCs in a row, the company has found some bolt-ons in the region that were too good to pass up.

Since the start of 2020, it has bolted on about 2,000 net acres in several “small” transactions done on a “drill-to-earn basis,” that is, no upfront costs, the CEO said. The company now controls around 24,000 net acres in the play.

The bolt-ons include two sections in the Bethany-Longstreet formation, Turnham said. The acreage “is set up for really shorter laterals, but 16 locations within those two sections are 880 feet apart, so there is quite a bit of running room…”

The plan is to “chip away at some bolt-on opportunities,” Turham said. “There are packages in the market currently that we’re evaluating…I think the deal flow is certainly higher than it has been, and we’ll see if we can continue to add to our position.”

Still, what “we’re not going to do is lever up for undeveloped locations,” he said. “The balance sheet is the key here…Obviously, we have over 16 years of inventory as it is. So I think we just need to be conservative. If we can pick things up where we have no upfront costs like what we’ve done here in 2020 that really fits in well for us because we can work that into our capex budget and capture the opportunity without upfront cash.”

The North Louisiana acreage is more than 75% undeveloped and 75% operated,” Turnham noted. With all of the acreage de-risked, “we are in development mode, drilling predictable wells in proven areas and connecting wells into existing pipes with excess capacity.”

Holding costs down is key, and the company plans to “remain in maintenance mode, with roughly flat production levels during 2020,” the CEO said.

“We certainly do like where natural gas is setting up,” Goodrich said. However, “we’re continuing to take a more cautious mode and just staying in maintenance.”

The company expects to keep volumes flat heading into 2021 with less capex.

“The question is whether that’s all we do in a $2.75 gas environment,” Turnham said. “I think it’s unlikely that all we’re going to do is just target holding volumes flat. We can even spend a little bit more money perhaps than holding volumes flat and grow to some degree.

“You won’t see us likely grow dramatically, but certainly getting to a 10% growth generating substantial free cash flow and spending less money is really an option that the board will consider as we set our budget in December.”

Net quarterly losses totaled  $15.7 million (minus $1.25/share ), versus year-ago profits of $11.8 million (96 cents). The loss was attributed to a one-time charge of $6.8 million for the declining value of oil and gas properties. There also was a hedging loss estimated at $9 million.

The company exited June with $1.6 million cash, $95.4 million outstanding under the credit facility, and total principal debt outstanding of $109.3 million.