For Goodrich Petroleum Corp. and Comstock Resources Inc., it’s all about a revitalized Haynesville Shale. 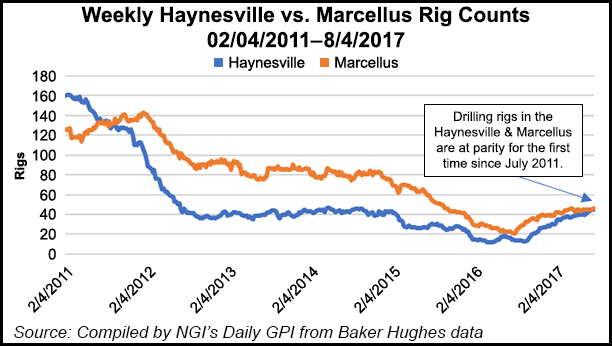 Just two months removed from bolting on adjacent net acres, Houston-based Goodrich is working to complete a long-lateral well targeting the Haynesville with a completion technique that involves more proppant, and it is planning to complete two more long wells from the same pad before the end of the year, all while looking for additional bolt-on opportunities.

Meanwhile, Frisco, TX-based Comstock, which has a proprietary enhanced completion design, plans to fund a Haynesville drilling program through the rest of the year primarily through its operating cash flow, as it participates in a joint venture (JV) formed last January.

Currently, Goodrich is drilling the Franks 25&24 No. 1 well (69% WI), which it expects to complete in September. The well is being drilled with a 10,000-foot lateral and 5,000 pounds/foot of proppant. Once the Franks well is completed, the company plans to drill the Wurtsbaugh 25&24 Nos. 2 and 3 (69% WI) from the same pad, each with 7,500-foot laterals. Goodrich anticipates performing hydraulic fracturing activity in December.

Additionally, Goodrich reported that the two initial wells with 10,000-foot laterals in which the company participated, the ROTC 1 and 2, are continuing to perform at or above type curves. Cumulative production from the two ROTC wells, which for the past seven months have been under a choke management program designed to minimize drawdown, has totaled 11 Bcf.

“There’s no question that the higher profit concentration in the one ROTC well is generating a better well result,” Turnham said. “All things being equal, longer is better and more proppant is better, at least in the Haynesville. As far as choking these wells back, we think it’s an integral part of ultimately getting the maximum recovery of the resource in place and we limit our drawdown to roughly 30, maybe as much as 50 psi per day. Simply put, it’s just being general on the formation by not pulling the well too hard…

“Our goal here is to obviously have the lowest finding and development cost, but also maximizing returns and creating bigger reserves over the long haul. We think the reduced choke program is going to allow for that.”

CEO Walter Goodrich also said on the call the company would ideally prefer to pump 5,000 pounds/foot of proppant at all of its wells.

“The real question is overall costs, so we’re looking very closely at interval stage, stage spacing links and generally we believe tighter is better,” Goodrich said. “But again, it’s the ultimate question of costs and cluster spacing we think is very important.

“These very, very high profit per foot wells are delivering extraordinary early time conductivity and therefore artificial porosity and permeability, which is allowing for us to be able to choke them back and deliver a very flat decline curve. We’ll just see how that plays out over time. But clearly the tightness of the spacing increased profit is allowing us to both maintain fairly flat rates at pretty high levels with the reduced choke program.”

The company had originally planned to drill the Wurtsbaugh 25&24 Nos. 2 and 3 with 10,000-foot laterals. The change allowed Goodrich to lower its capital expenditures (capex) budget for the year from $40-50 million to $35-45 million. It plans to drill nine to 12 gross (four-five net) wells in the Haynesville this year.

Comstock spent $86.6 million on its development and exploration activities during the first six months of 2017, when it drilled 10 gross (8.1 net) horizontal natural gas wells. Drilling was taking place at four gross (2.0 net) wells at the end of the second quarter. Since its last operational update, Comstock has completed five operated wells in the Haynesville, with an average IP rate of 27 MMcf/d.

One of those five completed wells set a new company record for IP. The Headrick 14-11 No. 2 well in DeSoto Parish, LA, tested with an IP rate of 37 MMcf/d. The Headrick well was drilled to a total vertical depth (TVD) of 11,539 feet and includes a 6,861-foot lateral.

Comstock is currently completing the Grantham 30-31 No. 1 and the Headrick 14-11 No. 1, each with 7,500-foot laterals. The company also has three wells awaiting completion.

Last January, Comstock formed a JV with USG Properties Haynesville LLC, a subsidiary of NextEra Energy Inc., to develop Haynesville properties in Louisiana and Texas. The JV currently has about 6,300 net acres.

During an earnings call on Monday to discuss 2Q2017, Comstock CFO Roland Burns conceded that the company had “fallen a little behind on getting our wells completed this year,” but said Comstock was still on track to exit 2017 with natural gas production ranging from 195-215 MMcf/d.

“As we finish out this year, a lot depends on the strength of gas prices this year with the hedges we have,” Burns said. “Next year we have the flexibility to really adjust to the cash flow levels that we see based on what we’re able to hedge next year at…

“We’re trying to create flexibility around the capital spending, which is tricky because you have to commit to these services in order to have them. You can’t just pick up a rig and a frac crew if you decide overnight to do it. I think weaker prices make that easier to do. Everything is kind of at this crossroads…but we’re positioned for either way” on natural gas prices in 2018.

COO Mack Good said there is “absolutely no doubt we like both the Haynesville and the Bossier, and we’re continuing to grow our position in it. We have been and are still moving [with] the various acreages while being careful to target only what we consider high-quality Haynesville and Bossier targets. In keeping with that growth effort, our JV with USG is one path we’re following.”

Goodrich hasn’t formulated a drilling plan for 2018 yet, but current “internal thinking” sees a capex budget higher than what will be spent in 2017, said the CEO.

“Whether or not that works out to one full-time rig or not, is still a bit of a question,” Goodrich said. “I think probably not, but certainly we expect to see capex levels higher, and that obviously will depend on what happens exactly in the second half of the year and where natural gas prices are. But we are currently thinking something on the order of 20-30% higher capex, [which] should continue to drive growth into and throughout 2018.”

Goodrich said second quarter production totaled 3.3 Bcfe (36,300 Mcfe/d), 85% weighted to natural gas and a 42% increase from the preceding quarter. A change in drilling schedules, coupled with a desire to take advantage of the two-well pad and competitive service cost bids, prompted Goodrich to revise its year-end exit production guidance to 55,000-60,000 Mcfe/d.

Meanwhile, Comstock reported 18.8 Bcfe of total production in 2Q2017, a 20% increase from the year-ago quarter (15.6 Bcfe). The company attributed a 28% increase in natural gas production during that time frame (from 13,519 to 17,321 MMcf) to its successful drilling program in the Haynesville, although power outages from storms and tornadoes in the area forced Comstock to shut in some wells during 2Q2017.

Comstock’s increase in natural gas production was enough to offset a 32% drop in oil production (from 355,000 to 243,000 bbl), which the company said was from a lack of drilling on its Eagle Ford Shale properties in South Texas. Good reiterated that Comstock has “an executable plan to drill numerous infill or stacked/staggered Eagle Ford oil wells when the oil price justifies that investment.”

Goodrich and Comstock each reported net losses for the second quarter.

At Goodrich, the net loss was $1.2 million (minus 13 cents/share), versus a sequential net loss of $5.7 million (minus 63 cents). The company filed for bankruptcy protection in April 2016, but emerged from Chapter 11 in October and began trading new stock in April.

For more on the Haynesville Shale’s re-emergence, check out the NGI special report “Haynesville 2.0.”