Natural gas and oil production taken offline in the Gulf of Mexico (GOM) by Ida is not coming back as quickly as first advertised, federal officials said Thursday. 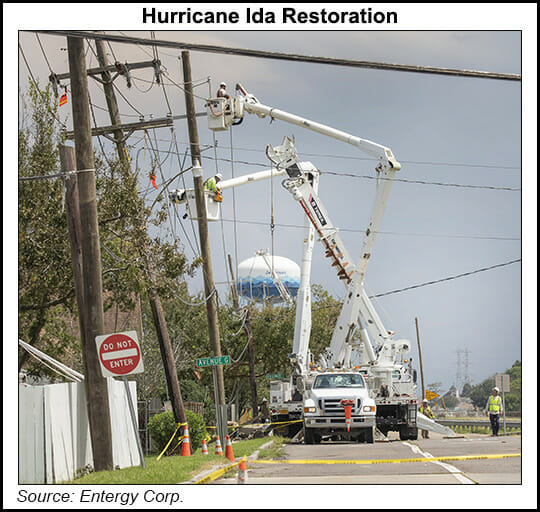 Following major storms in the GOM, the Bureau of Safety and Environmental Enforcement (BSEE) compiles daily reports from operators. On Thursday, it was clear that something had happened, with production volumes much lower than those reported on Wednesday.

The Interior Department’s agency said based on data from offshore operators as of midday Thursday, 91.29% of the natural gas produced, or 2.035 Bcf/d, was offline. Around 93.55%, or 1.70 million b/d, of the oil produced also was offline.

BSEE press secretary Sandy Day told NGI it was a computer glitch. The issue on Wednesday caused “the numbers to be reported incorrectly,” he said. Thursday’s numbers “are verified and correct (triple checked).” BSEE planned to put a notice on the website to address the errors in the previous report.

As of midday Thursday, a total of 177 production platforms (31.61%) remained unmanned, according to BSEE. Personnel also remained evacuated from six moored rigs, or 54.55% of the 11 in operation. Four unmoored rigs, or dynamically positioned, also remained off location, which is around 26.7% of the total.

Power restoration in Louisiana was slow. Assessments underway also showed that extensive infrastructure repairs may hinder progress on getting crews back to offshore platforms.

Royal Dutch Shell plc, the most active producer in the GOM said its primary heliport in Houma, LA, which transports crews to offshore platforms, “sustained significant damage” during Hurricane Ida.

“A temporary crew-change heliport will be established in the days ahead,” the energy major said. “Crew changes to and from assets will not occur until the temporary heliport has been established.”

Houma and Port Fourchon, LA, serve as home base for more than 200 energy companies that provide people and equipment for the offshore. The region was devastated by Ida, with roads submerged or blocked.

Local officials have indicated it could be weeks before repairs are completed. People who work for the various energy companies also are dealing with extensive damage to their homes and businesses in Port Fourchon, Houma and beyond.

An initial flyover of Shell’s deepwater assets that were in the path of Ida confirmed that the Mars, Olympus and Ursa platforms were “intact and on location.” A more detailed assessment was planned by helicopter.

Shell’s Perdido platform in the southwestern part of the GOM remained online. Also online is the Turritella, aka Stones, floating production storage and offloading vessel.

“All other assets remain shut in and fully evacuated at this time,” Shell said.
Assessments also were being made of Shell’s manufacturing sites in Louisiana.

The Norco Manufacturing Complex in St. Charles Parish, which has refining and chemicals facilities, lost power during the storm. There also “is evidence of some building damage,” Shell said. “We will commence a site start-up when safe to do so.”

In addition, Shell’s Geismar site was shut down before Ida came ashore, and it did not lose power. However, damage and operating unit assessments were underway.

“At this time, we cannot confirm a schedule for when Norco and Geismar will resume full operations and production,” Shell said.

Meanwhile, four people who had remained aboard Noble Corp.’s Noble Globetrotter II drillship were evacuated on Wednesday. The dynamically positioned (unmoored) drillship had been working on a well and was moving off location as Ida approached.

The U.S. Coast Guard (USCG) on Wednesday helped to rescue the crew from  the drillship, which was around  80 nautical miles south of Grand Isle, LA. The USCG said its Eighth District Outer Continental Shelf division had been in contact with the Globetrotter II’s licensed master and with Noble officials since last Sunday after determining the drillship may have been damaged.

Globetrotter II’s licensed master, who is responsible for navigating the vessel, “maintained that the vessel was not in distress and not actively taking on water,” USCG noted. However, social media posts reportedly by crew members indicated “potential issues with safety, including possible damage to the hull.”

The USCG, “out of an abundance of caution” launched a helicopter crew from Air Station New Orleans to conduct an overflight of the vessel. It also diverted the USCG  Cutter Venturous to the scene.

“The vessel and the company are developing a plan to bring the vessel into port for repairs,” the USCG noted.

Louisiana’s Entergy Corp. was making some progress in restoring power. As of early Thursday, power had been restored to around 167,000 total customers, or 18% combined, in Louisiana and Mississippi.

“Those in the hardest hit areas could experience power outages for weeks,” Entergy repeated on Thursday. “The nearly 950,000 Entergy customers affected are second only to Hurricane Katrina’s 1.1 million who were left without power.

“The next days and weeks will be difficult for our region, but our workforce is here to lead the recovery, working until the last light is turned on.”

Power had been restored to most of the region’s critical service providers in Louisiana. Wastewater infrastructure also “is a priority for all impacted areas across the state,” the utility noted.

Entergy said it was facing restoration issues because of the “unique landscape” spanning land, water and marsh by the transmission system. In many cases, it said, special equipment would be used to “inspect, repair and replace the steel, concrete and tensioned wires that are the foundation for our structures.”

Entergy crews estimated they had assessed close to 60% of the impacted infrastructure in Louisiana, with assessments still to come over some of the more damaged areas along the coast. As of late Wednesday, distribution systems damaged in Louisiana and Mississippi included 5,851 poles, 7,088 spans of wire and 1,399 transformers damaged or destroyed. More than 1,600 miles of transmission lines remained out of service.

The Department of Energy (DOE) in its Hurricane ida Situation Report on Thursday said there were widespread fuel shortages in Louisiana because of a lack of power. The issues were being “exacerbated” by a shortage of qualified drivers and the poor road conditions.

The USCG Captain of Port of New Orleans also is enforcing a temporary safety zone until Sept. 30 on a portion of the Lower Mississippi River to prohibit traffic around the safety hazards associated with downed electrical transmission lines.

In addition, the U.S. Army Corps of Engineers was working to confirm “the position of numerous sunken barges” on the Mississippi River. It planned to reopen the waterway to shallow draft traffic pending surveys and the location of sunken barges.

Meanwhile, the Pipeline and Hazardous Materials Safety Administration (PHMSA) has issued a stay of enforcement “to all liquefied natural gas facilities and interstate gas and hazardous liquid pipeline operators affected by Hurricane Ida.”

The stay, in effect for at least 45 days, alerts operators that PHMSA plans to temporarily relax enforcing some regulations related to operator qualifications and employment drug testing requirements “to remove obstacles that would prevent safe and rapid recovery efforts.”

Giving Back At Chevron

Chevron Corp. on Thursday committed $3 million to support relief and recovery efforts underway in the communities affected by Ida.

“We understand that these resources are vital to support the needs of our communities. There is significant recovery work to be done, and Chevron stands by our fellow Louisiana residents through this difficult time.”

Chevron plans to donate $500,000 each to the American Red Cross, Catholic Charities and Team Rubicon for relief efforts throughout the impacted region, including Jefferson, Lafourche, Terrebonne, St. Charles, Orleans, Plaquemines and St. Tammany parishes. The remaining $1.5 million would be distributed across local organizations focused on disaster relief.

Chevron also said it would match qualifying donations to hurricane relief efforts “made by employees and retirees, as well as provide financial contributions to organizations where employees volunteer.”