The Interior Department’s Bureau of Ocean Energy Management next month plans to offer 78 million acres for oil and natural gas prospecting in the Gulf of Mexico (GOM), basically all available unleased areas in federal waters. 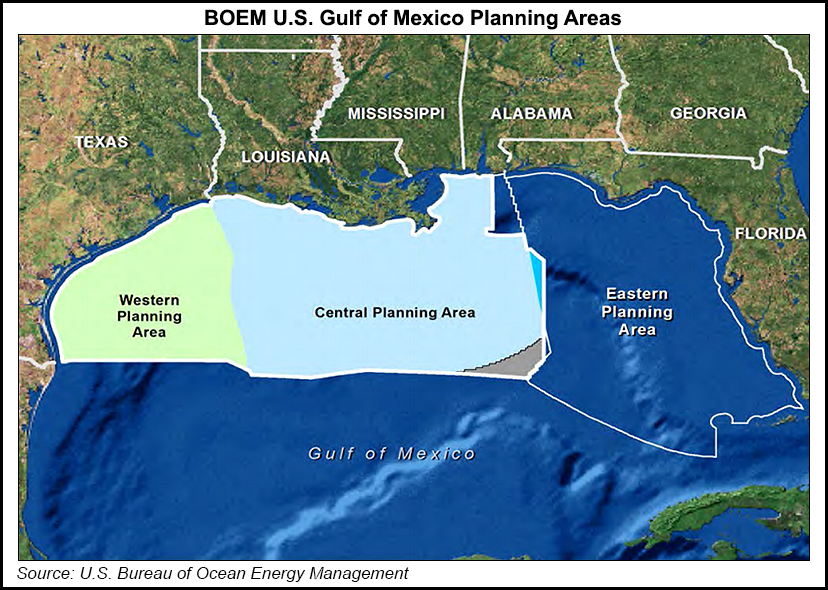 Lease Sale 252, scheduled to be livestreamed on March 20 from New Orleans, is to include nearly 14,700 blocks that are three to 231 miles offshore, in the Western, Central and Eastern planning areas in water depths that are nine-to-11,115 feet.

Next month’s sale would be the fourth of 10 under the 2017-2022 National Outer Continental Shelf (OCS) Oil and Gas Leasing Program. Two sales are scheduled each year to include all available blocks in the combined planning areas.

The Trump administration instituted region-wide sales, as opposed to offering specific planning areas, but to date the plan has not increased bids nor participants. A region-wide sale held last March, which former Interior Secretary Ryan Zinke said would be a “bellwether” for future offshore exploration, barely managed to surpass one that offered fewer blocks for leasing in March 2017.

In another region-wide auction held last October, less than 1% of the blocks received bids, although the high bids eclipsed offers in the March sale.

Excluded from the next lease sale are blocks subject to the congressional moratorium established by the Gulf of Mexico Energy Security Act of 2006, blocks adjacent to or beyond the U.S. Exclusive Economic Zone, aka the northern portion of the Eastern Gap; and whole/partial blocks within the current boundaries of the Flower Garden Banks National Marine Sanctuary.

The GOM OCS, covering about 160 million acres, is estimated to contain about 141 Tcf and 48 billion bbl of undiscovered, technically recoverable reserves.

Revenues received from the leases are directed to the U.S. Treasury, Texas, Louisiana, Mississippi, Alabama, as well as the Land and Water Conservation Fund and the Historic Preservation Fund.

Leases resulting from this proposed sale would include stipulations to protect biologically sensitive resources, mitigate potential adverse effects on protected species and avoid potential conflicts associated with oil and gas development in the region.

BOEM has included fiscal terms that take into account market conditions and ensure a fair return for use of the OCS. These terms include a 12.5% royalty rate for leases in shallow waters, basically less than 200 meters of water, and a royalty rate of 18.75% for all other leases.

Terms and conditions are included in the final notice of sale package.