The devastation wrought by Hurricane Ida to the U.S. Gulf Coast and offshore became clearer on Wednesday, as oil and natural gas operations sputtered to restart. However, only a few customers in New Orleans on Wednesday were able to turn the lights on, as power outages remained widespread along the coast. 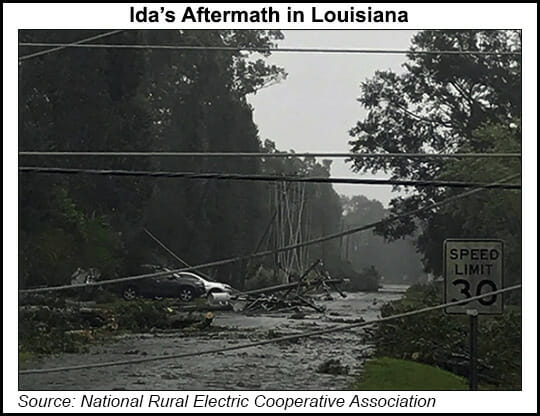 Reports indicated it could be weeks before power is restored across the region and the Gulf of Mexico (GOM) oil and natural gas industry is fully back to work. The Port Fourchon, LA, region is home base for about 90% of output from deepwater oil and gas wells, and it serves roughly 250 energy companies. The port and surrounding region are facing daunting challenges.

“There is no electricity and there will be no electricity for a long time,” Port Fourchon’s executive director Chett Chiasson said during an interview with National Public Radio. “In our community we have no running water…We will come back as soon as possible, but the bottom line is there is a long road ahead.”

There were “vessels in places where they are not supposed to be, to say the least,” he said. The damage to supply vessels that serve offshore producers appeared to be limited.

Louisiana Highway 1 still needed to be cleared of debris to allow heavy equipment to reach the port. Navigable waters also have to be surveyed to ensure safe travel.

People who work for the area companies and the port also are assessing damage to their homes, which could delay a restart for some operators. “Many stayed, many left,” Chiasson said. “You have some facilities that are in pretty good shape, maybe just some cosmetic damages and others that are completely destroyed.”

The Interior Department’s Bureau of Safety and Environmental Enforcement (BSEE) said production from the offshore was beginning to ramp up slowly.

According to operator reports submitted to BSEE as of midday Wednesday, about 83.21% of the natural gas production in the GOM, or around 1.88 Bcf/d remained offline. Nearly 80% of the current oil production, estimated at 1.455 million b/d, also was shut-in.

A total of 249 manned production platforms, or 44.46%, remained unmanned, BSEE said. Nine of the 11 moored rigs that currently operate in the GOM also were unmanned. In addition, four of the 15 unmoored rigs, aka dynamically positioned, had not been returned to their drilling location.

Most of the exploration and production companies that work in the GOM have provided little insight into when all of their crews could be returned to platforms and rigs.

BP plc, one of the largest GOM producers, said it mobilized to assess possible damage to its operated facilities in the deepwater.

However, “personnel will remain evacuated and production shut-in until we have confirmation that our platforms are able to operate safely, and pipeline companies have confirmed the operability of offshore pipelines,” BP spokesperson Megan Baldino told NGI.

“We are also confirming that our shore-based transportation and receiving systems are working, and will ensure we receive regulatory approvals required prior to start-up. At this time, we cannot predict how long this process will take. Safety is our top priority as we move forward and determine next steps.”

Rystad Energy’s Emily McClain, senior gas market analyst, said for the most part, the natural gas complex avoided a big hit from Ida. Liquefied natural gas (LNG) facilities on the Louisiana coast were not in the storm’s path.

The GOM “was the only significant contributor to gas supply loss,” according to the Rystad analyst.

About 2.1 Bcf/d was shut-in for the last four days of August. “This would result in an impact of about 300 MMcf/d on the monthly gas production average for August and potentially up to 150 MMcf/d for September, assuming rapid reactivation starts from Sept. 1.”

Rystad analysts expect a “minimal feed gas supply impact” for LNG export facilities There also is unlikely to be a “slowdown in ships leaving Gulf Coast ports. LNG export volumes are therefore expected to remain strong, averaging 9.8 Bcf/d in 2021, even if partial disruptions to feedgas volumes are incurred.”

In addition, the gassy Haynesville Shale in Louisiana avoided damage or shut-in wells, McClain noted. As of Wednesday, “upstream infrastructure and facilities in the area have not seen any meaningful hurricane impact upon initial assessment.”  That “can be attributed to maintenance of upstream facilities having high automation rates of around 95% and being designed to resist adverse weather conditions.

“Typically, gas plants tend to shut down during severe weather events like Hurricane Ida if there is significant likelihood of them being on the path of the storm,” she said.

Acid treatment for Haynesville production “is frequently performed in the field, so pipeline-quality gas can be produced immediately given the dry-gas nature of the play. This means that the dependence on midstream infrastructure is much less of a concern for Haynesville operators.”

No Power, No Water

Nearly half of Louisiana’s electricity customers still had no power on Wednesday, with damage assessments expected to take at least a few more days. The Department of Energy (DOE) in its Situation Report on Wednesday said total power outages in Louisiana totaled 48%, with more than one million people still without power. In Mississippi, most power had been restored, with around 30,000 customers, or 7%, still waiting to turn the lights on.

“Restoration efforts will continue to ramp up over the next few days,” DOE said. “Crews are unable to operate in heavily flooded areas and wind speeds greater than 30 mph.”
Most of New Orleans still was dark, although Entergy Corp. had begun to flip the switch in the eastern part of the city, with generation supplied by the New Orleans Power Station.

Entergy, with eight major transmission lines that deliver power into the New Orleans area out of service, said it is “aggressively exploring other opportunities to flow power into New Orleans by enabling generators located in the area to begin producing electricity without the need for a transmission source to provide start-up power.

“Because our transmission system spans land, water and marsh, in many cases special equipment will be used as we begin to inspect, repair and replace the steel, concrete and tensioned wires that are the foundation for our structures.”

The damage inflicted on the power system by Ida “has eliminated much of the redundancy built into the transmission system, which makes it difficult to move power around the region to customers,” Entergy noted. “These conditions, along with increasing demand due to higher temperatures, can result in an imbalance of supply and demand for electricity.”

Meanwhile, seven refineries in Louisiana remained shut down as of Wednesday morning, accounting for about 1.7 million b/d of refinery capacity, or 9% of total U.S. operable refining capacity. Two refineries in the Baton Rouge, LA area initiated the restart process on Tuesday, DOE noted.

Most refineries “are expected to be back online within three weeks,” said IHS Markit executive director Debnil Chowdhury. Overall storm damage across the region could delay pre-storm crude run rates by a month or more.

“While it is still early in the damage assessment phase, it appears that the majority of refineries impacted by Hurricane Ida are in the process of restoring power and operations to assets that were not flooded or sustained significant wind damage,” Chowdhury said.

Early Wednesday morning, some customers in New Orleans had their power restored, according to Entergy Corp. The utility used electricity from the New Orleans Power Station, a natural gas plant in New Orleans East.

No details were provided on how many customers were able to turn the lights on. However, 200,000-plus homes and businesses receive power from Entergy New Orleans. Once the first power outages were restored early Wednesday, the utility’s outage tracker reported about 173,000 still were without power. Entergy noted that the tracker was not in real-time and the figures could be higher or lower.

“While initial service can be provided to some customers, the full restoration will still take time given the significant damage across the region,” Entergy stated. “Crews will have to methodically bring back additional transmission lines over time to provide other pathways for power to enter the region, helping to maintain stability of the system throughout the complete restoration process.”