Potential operators bid on less than 1% of the offshore blocks offered for auction in the federal Gulf of Mexico (GOM) Lease Sale 251 completed on Wednesday, but while muted, total high bids eclipsed offers in the March sale. 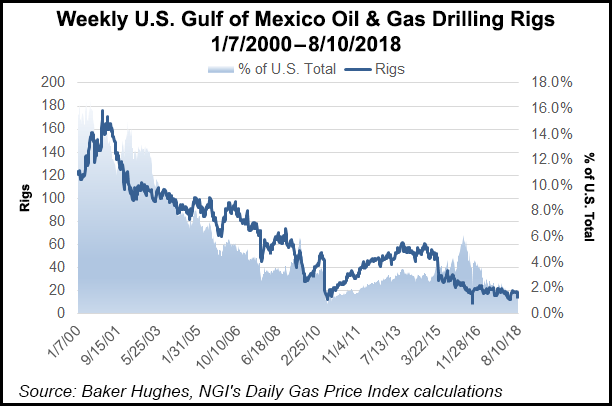 “I look at it as a positive sale,” said BOEM’s Mike Celata, GOM regional director, during a conference call with journalists to discuss the results. There was “increased competition from last sale that may have resulted in some high bids. Overall, we still see the Gulf of Mexico as a very viable place…”

Some Big Oil operators that previously have been active participants in the offshore auctions showed less interest this time around, but they could be keeping their powder dry for more attractive leases due to expire in the next year.

Hess Corp. was high bidder, with an offer of almost $25.92 million for a deepwater prospect in Mississippi Canyon (MC) block 338. By comparison, the highest bid in the March sale was about $7.07 million by a unit of Total SA.

“This lease sale is a barometer and a step in the recovering health of the offshore oil and gas industry,” said National Ocean Industries Association’s Tim Charters, vice president of governmental and political affairs. “While the recovery is neither uniform nor universal, efficiency improvements in the last few years are starting to bear fruit and some offshore sectors are showing profits, although the margins are slim.”

Interior reduced the royalty rate for shallow water blocks to 12.5% from 18.75% beginning with the March lease sale. A recommendation in February by Interior’s Royalty Policy Committee to reduce the deepwater royalty rate also to 12.5% has not been given a green light by the Trump administration, which Charters said has reduced enthusiasm.

All of the high bids, including by Hess, were for deepwater prospects.

The next BOEM auction for the GOM tentatively is slated for next March.