Natural gas and oil opportunities in the deepwater Gulf of Mexico (GOM) look to be expanding, with Tulsa-based Williams preparing to take advantage. 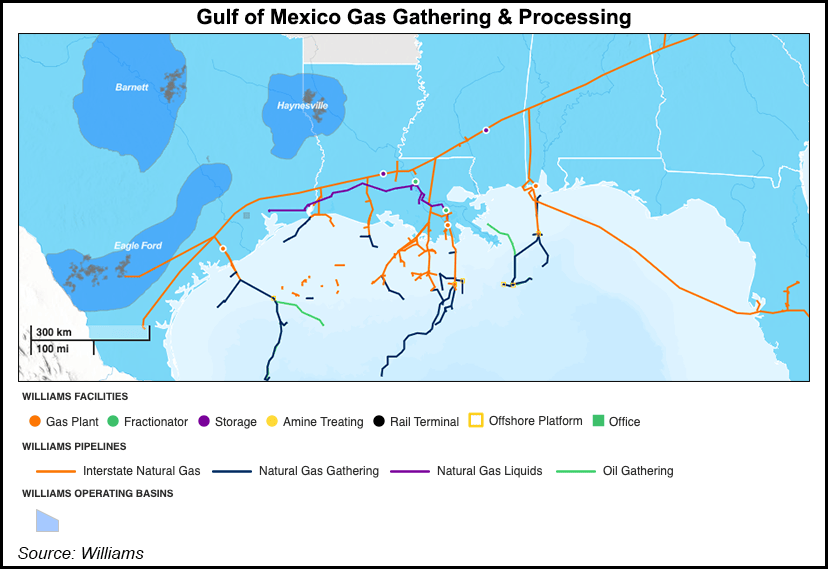 The midstream giant, which already has substantial GOM infrastructure, recently clinched an agreement to gather and transport natural gas from the Shenandoah development underway in the deepwater. The agreement is with Beacon Offshore Energy Development LLC and co-owner ShenHai LLC, a Navitas Petroleum LP subsidiary.

Shenandoah, which spans more than two blocks of Walker Ridge, has been on the drawing board since its discovery in 2009 by former operator Anadarko Petroleum Corp. The field now is scheduled to come online by late 2024.  The development, with gross resources initially estimated at 281 million boe-plus, is about 160 miles offshore Louisiana in water depths averaging 5,906 feet, or 1,800 meters.

Williams COO Michael Dunn said the investment in Shenandoah “is a strategic expansion of our Gulf of Mexico infrastructure, which further strengthens our portfolio of services.” The agreement allows the company to “capture the full value of these important deepwater resources.”

Williams agreed to install a five-mile lateral gas pipeline from the Shenandoah platform to the Discovery system’s Keathley Canyon Connector, a 20-inch diameter, 209-mile pipe. Williams has a 60% stake in Discovery; DCP Midstream LP is a 40% partner.

The natural gas would be transported to Discovery’s processing plant in Larose, LA. Natural gas liquids would be fractionated and marketed at Discovery’s Paradis plant, also in Louisiana.

No financial details were disclosed.

Shenandoah initially was to be developed with up to four wells, a floating production system with 70,000 boe/d-plus of capacity, subsea facilities and associated pipelines.

Discoveries in the GOM abound, with several advancing. The Energy Information Administration (EIA) in April predicted U.S. production from the GOM will increase in the next two years. By the end of 2022, EIA said 13 new projects could account for about 12% of total GOM oil production, or about 200,000 b/d.

Working in the offshore requires deep pockets and long-term investments, as it takes years for projects to come online. While some producers are reducing their Lower 48 investments, the GOM holds great promise for the majors and a few independents.

Houston-based Shell Offshore Inc. in May disclosed a “significant discovery” at the deepwater Leopard prospect in the Perdido corridor of the Alaminos Canyon. Shell is one of the top producers in the deepwater.

BP plc, another leading GOM producer, in April announced a discovery at its Puma West prospect in the deepwater Green Canyon. The discovery is west of the BP-operated Mad Dog field and about 131 miles offshore Louisiana.

The deepwater GOM also is central to supermajor Equinor ASA’s plans, executives said this month. The Norwegian producer, one of the region’s biggest operators, has stakes in 13 projects that are either producing, in development or are discoveries. The GOM portfolio is expected to be cash flow neutral in 2021 at an average oil price of $30/bbl and provide 90% free cash flow growth to 2025.

Managing the discoveries is likely to be geared to managing carbon emissions, with some big carbon capture and sequestration (CCS) projects eyed.

In April ExxonMobil said it was looking for local, state and federal support to build a $100 billion project to capture carbon emissions from the largest U.S. petrochemical complex along the Houston Ship Channel and bury them in the GOM. If the landmark project were to be built, ExxonMobil estimated that by 2030 the initial phase of the CCS project could capture 50 million metric tons/year of carbon dioxide.

Also on the drawing board is one by Houston-based Talos Energy Inc., which this month said it was looking at CCS projects for the Gulf Coast region with UK expert Storegga Geotechnologies Ltd.

“We have a responsibility to deliver affordable, reliable energy with the lowest carbon footprint possible, and this joint venture allows us to expand our impact beyond our own assets to provide solutions for removing emissions from critical industrial sectors in our backyard,” Talos CEO Timothy S. Duncan said.

According to Evercore ISI, marketed utilization for floating rig equipment in the Golden Triangle, defined as the GOM, West Africa and South America, improved substantially in May month/month.

The gains marked the “first time since September 2015 that all three regions have averaged at least 75%,” Evercore analysts noted. “We believe this supports our view that the floating rig market is strengthening and dayrates should begin to trend higher.”

The three legs of the Golden Triangle account for almost half of global demand, driving the market for high spec floaters.

“A comparable 39 floaters are scheduled to roll off contract before year end, in line with a year ago, representing about one-third of the contracted fleet,” the analysts noted. Contracting activity appears for now to favor short-term opportunities. The reported dayrate in late May stood at about $120,000, sharply below the mid-$400,000s for two newbuilds that were heading to Gulf Coast waters over the next year.

Evercore analysts highlighted comments by Transocean Ltd., considered the world’s largest offshore contractor. CEO Jeremy Thippen made headlines recently by noting that the “entire Gulf of Mexico fleet of active rigs will be sold out later this year.” Transocean “is engaged in both direct negotiations and open tenders for rigs, calling out an increase in urgency and an increase in more tenders.