While there are risks inherent in finding the yellow brick road to global energy growth, U.S. natural gas demand is likely to take off between now and 2020, a Goldman Sachs economist told an industry audience last week at the LDC Gas Forum Rockies & West meeting in Los Angeles. 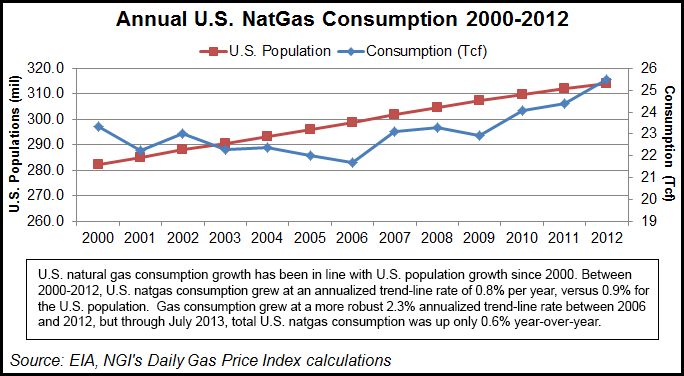 Goldman’s forecast is similar to those by other energy analysts (see related story). The Henry Hub spot price for natural gas is expected to increase to $4.00/MMBtu next year, compared with an estimated $3.71/MMBtu this year and an average $2.75/MMBtu in 2012, according to the U.S. Energy Information Administration.

As the market continues to shift away from pricing coal at the margin, Dart said the level of projected growth for U.S. natural gas is sustainable at Henry Hub prices up to $6.00/Mcf. The Goldman global scenario assumes Henry Hub prices in the years ahead will average $5.00/Mcf while also assuming that not all of the proposed U.S. LNG export projects will be built.

In terms of a gas price floor during the period, Dart said that $3.00 will continue to generate a lot of incremental demand, but currently Goldman’s projections are for prices in the $4.25/Mcf area in the fourth quarter and early next year.

“We expect natural gas demand to grow at a fairly impressive rate during the next decade,” said Dart. While there are infrastructure addition needs on both sides of the U.S.-Mexico border (mostly in Mexico), Goldman projects an additional 3.3 Bcf/d of pipeline exports south from now to 2020. “This has been growing quickly over time and we think it will continue to grow, but we do need more capacity.”

In the industrial sector, there is a lot of expansion being planned equaling about 700 MMcf/d of additional capacity stimulated by low gas prices, but all of the expansions “would still be economic even if Henry Hub prices were $6.00.” For coal-to-gas electric generation shifts, Dart said the range of volumes is not price-induced but instead will depend on the level and timing of more stringent air quality regulations. “There will be switching even if gas prices are above Appalachian coal prices.”

Goldman estimates that LNG exports will be about 7 Bcf/d, with an additional 5 Bcf/d from British Columbia ports — numbers that are in tune with other forecasts. In the United States, the Department of Energy (DOE) approvals will not be a roadblock, she said. What will limit the number of projects built will be financing. “The DOE has been quite supportive of projects,” Dart said. “I am focused a lot more on the chances of getting financing.”