International benchmark Brent crude prices will average $140/bbl between July and September and hang near that level through the first half of next year, analysts at Goldman Sachs Group forecasted. 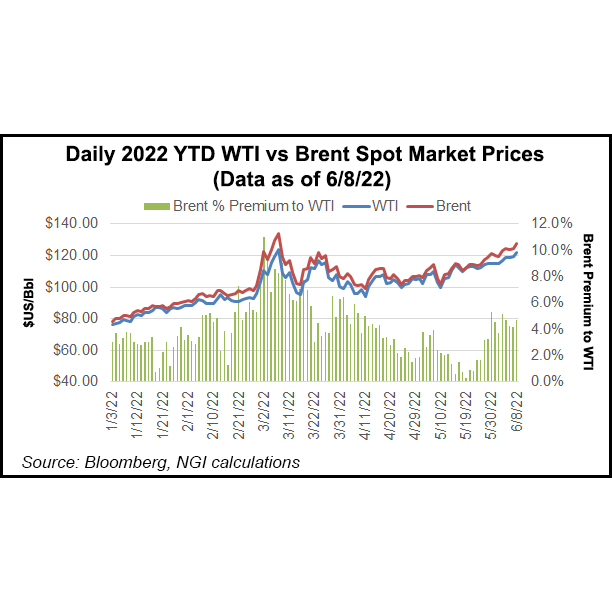 That marks a substantial jump from their earlier call for global prices to average $125 in the third quarter.

Prices may need to climb even higher to balance supply with demand, the analysts said. They noted continued supply challenges imposed by Russia’s war in Ukraine and expected demand increases during the coming summer months.

“A large spike in prices remains quite possible this summer, when demand seasonally reaches its peak,” the Goldman analysts said.

They did not predict a peak price but said crude needs to get so expensive that it causes a 500,000 b/d drop in global demand to rebalance the market.

Global oil prices would need to average $135 for a year, beginning in July, “for inventories to finally normalize by late 2023,” the analysts, including Damien Courvalin and Jeffrey Currie, said in a report this week. That is up $10 from the team’s previous forecast.

Brent has traded above $120 in early June, already up more than 50% for the year.

China, the world’s largest crude consumer, pulled back on oil demand this spring amid a coronavirus surge that galvanized government officials to order new lockdowns. This included Shanghai, the country’s largest city, with about 25 million residents.

But authorities in that city and others in China began easing restrictions this month, opening a pathway for a burst in summer activity and demand for fuels derived from crude.

Additionally, the United States banned imports of Russian oil this year in protest of the Kremlin’s invasion of Ukraine. The European Union recently followed suit with an embargo of most Russian crude. This could affect some 3.0 million b/d, according to the International Energy Agency.

Russian oil once destined for Europe is now being redirected to China and elsewhere in Asia. Still, the Goldman analysts said Russian production is expected to fall by 1.0 million b/d by year’s end from 10.8 million b/d in May.

Absent big production hikes by the United States and OPEC – both have increased output at a measured pace to date this year — the analysts estimated the global supply deficit still would be about 400,000 b/d in the third quarter.