U.S. oil prices should hold between $50-60/bbl through 2020 on improved unconventional productivity and increased overseas supplies, Goldman Sachs is forecasting. 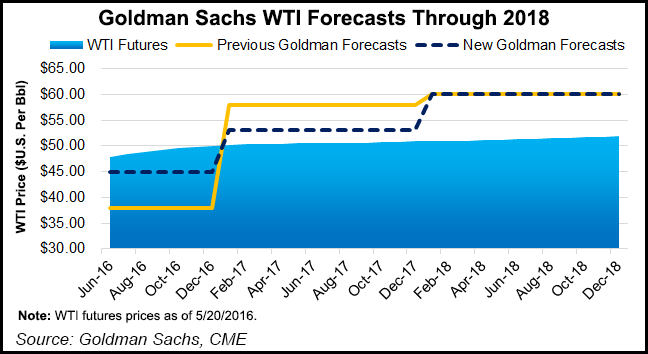 “We continue to have a long-term deflationary oil outlook,” driven by shale productivity, elevated supply by the Organization of the Petroleum Exporting Countries (OPEC) and project ramp-ups to 2018, analyst Brian Singer and his team said in a note. “Over the past year, shale productivity has been in line with our 3-10% estimates, and we continue to see a $50-60/bbl range of prices through 2020.” While the more positive 2016 is offset by moderated forecasts for 2017, “we still see oil prices rising to the upper end of our $50-60 range next year (now 4Q2017).”

West Texas Intermediate (WTI) crude is expected average $45/bbl in 2016, versus a previous Goldman forecast of $38. However, the 2017 forecast was trimmed to $53/bbl from $58. The more positive 2016 is offset by moderated forecasts for 2017, but oil prices are forecast rise to the upper end of the guidance by the end of 2017. Henry Hub natural gas prices this year are expected to average $2.46/MMBtu, 4 cents lower than previously forecast. For 2017 and 2018, gas prices are expected to average $3.00.

“Our target prices now reflect greater credit for our shale productivity scenario,” Singer said. “Together, this blends our outlook for the medium- and long-term oil environment…We increase our mid-cycle Henry Hub to $3.00/MMBtu (from $2.75). Similar to the oil macro, we have greater confidence in higher gas prices in 2017 driven by the supply response by producers in the currently depressed commodity environment.”

Ultimately, when and if oil prices exceed $60 “will partly be determined by the extent of further OPEC-supply ramp, return of disrupted production and whether we will see constraints to a ramp in U.S. production,” Singer said.

The key question for the U.S. energy complex — does the world need U.S. oil to grow?

Shale productivity should continue to pressure prices. A year ago, Goldman began to base-case well productivity gains from key unconventional plays at 3-10% per year through the end of the decade.

“Our analysis suggests year/year well performance improvement at a similar magnitude, and we continue to broadly assume this going forward,” Singer said. This would bring average breakeven oil prices, with an 11% internal rate of return, from the “Big 3” unconventional plays — the Permian Basin, Bakken and Eagle Ford shales — to below $40/bbl WTI over the life of the play.

“If we see well productivity rise at a 3-10% rate per year without an increase in capital costs per well, then breakeven prices could fall, and the U.S. would produce materially more of the world’s oil,” according to Singer and his colleagues. “If we base case 3-10% productivity improvement through 2020, we believe breakevens could fall below $50/bbl — even after assuming some cyclical cost inflation. Ultimately, we still believe balance sheet considerations…will govern producer decisions, which pressures productivity gains to be large to offset the impact on cash flow of lower oil prices and allow producers to maintain activity levels and capital budgets.”

Goldman is basing is slightly more bullish forecast in part on the fact that many projects are being canceled, reflecting the “New Oil Order,” Singer said. “The shale-driven New Oil Order is driving a reduction in impactful projects, leading to our first year/year reduction in the number of projects in our top projects report.” Goldman has published the “Top Projects” report for more than 10 years, and each year until 2015 the number of projects has risen.

“However, we believe that the deliverability, cost positioning and shorter lead time of U.S. shale has changed the world so much, likely resulting in fewer impactful projects,” and positively impacting U.S. unconventional growth longer term.

“We believe technology enhancement and scale will continue to drive productivity gains of this magnitude, which we believe will push average breakevens for shale plays below $50/bbl WTI by the end of the decade,” the Goldman team said. The Permian, and going forward, Oklahoma’s stacked reservoirs, are “best positioned for future productivity gains.”

Across the U.S. unconventional landscape, increasing horizontal lateral lengths were responsible for a 2-4% contribution to 2015 productivity gains in wells reviewed through September. Lateral lengths may contribute less in the future, with more quality driven by where the laterals are landed and by increasing fracture stimulations.

Meanwhile, E&P capital spending is predicted to continue to be lower overall, negatively impacting most oilfield service operators. Midstreamers also may face more stress for the next couple of years because of overcapacity, according to Goldman.