Construction on the Golden Pass liquefied natural gas (LNG) export project in Texas is progressing, with the facility on track to come online in 2024, according to ExxonMobil. 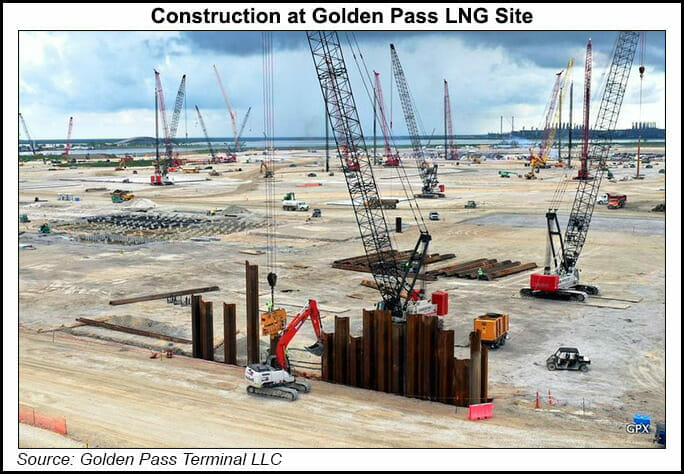 ExxonMobil Qatar President Dominic Genetti said recently there are currently about 4,000 people at the worksite for the three-train, 16 million metric tons/year (mmty) facility.

“I think the timing is going to be good in the market. And we’re looking forward to start-up in 2024,” Genetti said during a U.S.-Qatar Business Council webinar. Qatar Petroleum (QP) has a 70% stake in the project, with ExxonMobil holding the remaining 30%.

In a filing late last month with the FERC, Golden Pass indicated it was progressing activities that included installing the foundation for the first train, piling in Train 3 and erecting steel in a new controls building.

Genetti added that the $10 billion development “provides us multiple supply points, which helps to optimize the transportation of LNG around the world.”

Other panelists during the webinar said the Golden Pass development represents a key strategic partnership between the United States and Qatar, even as the nations are expected to compete for LNG market share in the coming years as global demand balloons.

U.S.-Qatar Business Council managing director Mohammed Barakat said he expects LNG producing nations, including the United States and Qatar, to wield even greater influence in the global energy markets in the years to come.

“We’re looking at a big shift between LNG producers becoming more involved and heavy players in the energy market,” he said. “And at the same time, these countries are doing more for the sustainability and energy reduction of emissions.”

Global natural gas prices have shot up to record highs this year with demand rebounding as nations ease Covid-19 restrictions. A number of unplanned outages at global LNG facilities and lower-than-usual inventories in Europe have also spurred the rise in prices.

“I believe they’re going to remain elevated until there’s a new wave of liquefaction plants starting up in about 2024 and 2025,” said Marianne Kah, adjunct senior researcher at Columbia University’s  Center on Global Energy Policy. “And that will move prices to more normal levels.” However, she added that prices could remain higher for longer if expected supply fails to come online by then.

Kah said planned facilities in the United States are among those most at risk of a delayed or canceled startup, with the nation’s increasing focus on renewables in its energy policy. Projects in Mozambique are also at risk, as a violent insurgency has halted work at TotalEnergies SE’s facility and stalled a sanction of an ExxonMobil-backed development there.

The panelists also expressed skepticism about the International Energy Agency’s (IEA) roadmap for the world to achieve net zero-emissions by 2050. The report released in May sets out more than 400 milestones to guide emissions to net zero by 2050 and keep the human-induced global temperature rise under 1.5 degrees Celsius.

“It will never be achieved,” Al-Attiyah said, noting that nations such as China and India still rely heavily on coal power.

Kah also said the scenario was unlikely to come to fruition because it would require a huge investment in green energy.

“You would have to triple the investment in clean energy and energy infrastructure by 2030,” she said. “Energy intensity would have to fall at two-and-a-half times the rate that we’ve seen historically. And almost 50% of the emissions reductions in that IEA report are set to come from technologies that aren’t yet commercially available.”