Golden Pass LNG remains on track to start production in 2024, when the first of three liquefaction trains is expected to start ramping up on the Texas coast. 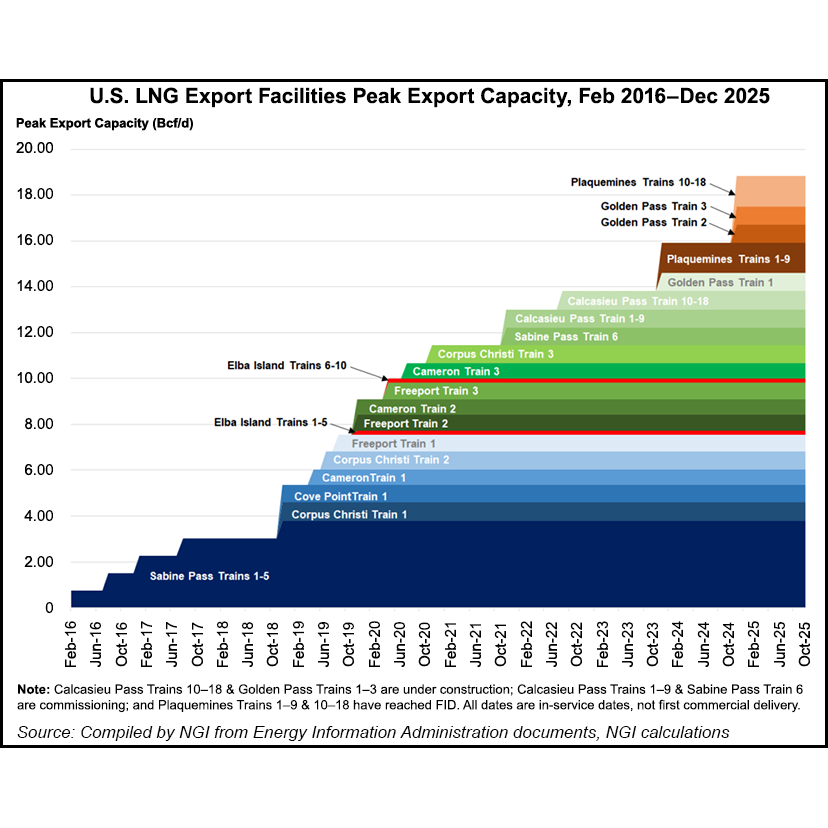 The other trains are set to begin coming online at intervals about six months apart as commissioning continues, said Chief Commercial Officer Jeff Hammad on the sidelines of the North American Gas Forum in Washington, DC.

Hammad told NGI that he expects liquefied natural gas cargoes loaded at Golden Pass in Sabine Pass, TX, to be on the water by 2024.

The facility started service in 2010 as an import terminal. In 2019, QatarEnergy and ExxonMobil made a final investment decision to add liquefaction trains and export capabilities.

There are currently about 5,500 workers on site, Hammad said, adding that number would grow to more than 7,000 at peak construction. He estimated that about 98% of procurement for the $10 billion project is finished.

“We were able to get ahead of a lot of the inflationary pressures that new developers will face by procuring all of our long-lead time equipment and a lot of our stuff,” he told conference attendees during a panel discussion. “As a matter of fact, almost everything we need to complete our project is in our laydown yards.”

Under the current timeline, the roughly 2.5 Bcf/d terminal would enter full service sometime around 2025. Along with Venture Global LNG Inc.’s Plaquemines export project, which was sanctioned this year, Golden Pass would boost peak U.S. export capacity to more than 18 Bcf/d from current peak capacity of about 14 Bcf/d.

The increase would come amid a projected gap between LNG supply and demand in the coming years and help nations in Europe and other parts of the world looking to displace Russian gas supplies following the Kremlin’s decision to invade Ukraine earlier this year.

QatarEnergy owns 70% of the project and ExxonMobil holds a 30% stake. The partners had been marketing Golden Pass volumes through a joint venture called Ocean LNG they established in 2019. The companies said Thursday they would continue to independently market and offtake supplies from the terminal.

ExxonMobil LNG Asia Pacific has been provided the rights to market 30% of LNG produced at Golden Pass, while QatarEnergy Trading would market the remaining 70%.

QatarEnergy CEO Saad Sherida Al-Kaabi echoed Clarke by saying, “it is only natural for us to increase focus on LNG trading and portfolio optimization to deliver innovative LNG solutions that meet the needs of our customers across the globe.”

Golden Pass is also making upgrades to the pipeline system connected to the facility. The company already has deals in place for feed gas supply, including one signed over the summer with Chesapeake Energy Corp. for 300 MMcf/d of certified gas.

Hammad told exploration and production executives in the audience that if they had certified gas, they’re at “the front of the line” for any additional supplies needed by the terminal, which will eventually be among the largest gas buyers in the United States.

“Yes, there is a premium,” Hammad told the audience of the certified gas Golden Pass would purchase, “but I’m not selling LNG for a premium. Most of the folks that already have sales and purchase agreements signed and in place did this before certified gas was a thing. But we’re doing it because it’s the right thing to do.”