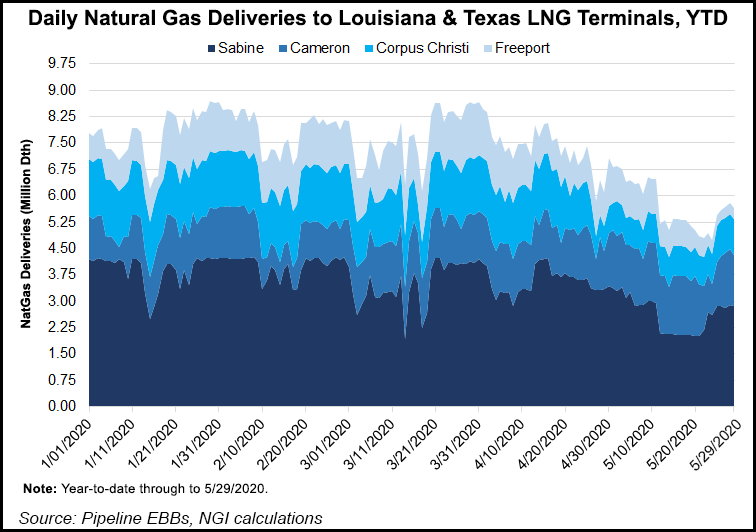 If approved by the Federal Energy Regulatory Commission, the motion would increase total production capacity to 18.1 mmty (937 Bcf/year) from the previously authorized 15.6 mmty (740 Bcf/year) [CP20-459].

FERC is accepting comment on the proposed capacity increase through June 18.

To be built in Sabine Pass on the upper Texas coast, Golden Pass was sanctioned in February 2019.

The estimated $10 billion project is to include three liquefaction trains, each with capacity of 5.2 mmty. Also planned are associated utility systems, interconnections and an expansion of the facility’s storm protection levee system.

Houston-based Golden Pass sponsors originally designed a gas import project in 2003, when U.S. gas stores were depleted and unconventional resources had yet to be affirmed.

The export design would use the existing infrastructure, which includes five storage tanks, two marine berths to accommodate the largest LNG carriers, and an existing 69-mile pipeline system with access to U.S. markets. Construction was expected to take about five years, with the facilities set to be operational in 2024.

Golden Pass agreed to be a 20-year cornerstone shipper for Enable Midstream Partner’s proposed interstate gas system Gulf Run Pipeline, with a commitment of 1.1 Bcf/d. Gulf Run, launched in 2018, is proposing to move up to 2.75 Bcf/d from Northern Louisiana to the Gulf Coast to supply export projects. Enable is anticipating a late 2022 in-service date, including filing for required approval by FERC.

Working interests in Golden Pass project are 70% owned by QP and 30% owned by ExxonMobil. The project builds upon an international relationship between the two giant producers, with QP also joining ExxonMobil in exploration and development activities in Argentina, Brazil and Mozambique.