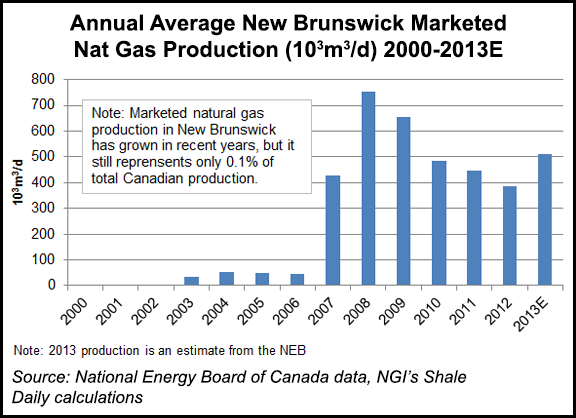 Assets initially acquired by PPLP consist of about 50,000 acres prospective for gas development within New Brunswick, initially held by Contact. As consideration for the indirect contribution of a 15% working interest in the assets into the partnership, Contact has received an initial cash payment of C$1.3 million from Pieridae and has been issued common shares of Pieridae equal to 15% of its currently issued and outstanding shares.

While marketed natural gas production from the province was virtually nonexistent as recently as 2002, it took off in 2007. Despite this recent growth, New Brunswick gas production in 2012 only accounted for 0.1% of total Canadian gas production, according to National Energy Board of Canada data and NGI’s Shale Daily calculations.

The quantity of shale gas contained on PLPP’s lands within the Frederick Brook member of the Albert Formation was the subject of an independent study conducted for Contact by GLJ Petroleum Consultants Ltd. of Calgary. The study found that the best estimate of prospective resources on the partnership’s lands is 2.138 Tcf based on a 20% recovery factor of the undiscovered petroleum initially in place of 10.897 Tcf gross and 10.690 Tcf with a partnership working interest of 98.1%. According to the study, recovery factors should be 10-30%.

New Brunswick officials recently unveiled new rules for oil and gas development in the prospective Frederick Brook Shale, including a requirement that operators disclose all of the chemicals used in hydraulic fracturing (see Shale Daily, Feb. 20).

The Hiram Brook Member within PLPP’s lands has also tested natural gas and is believed to be highly prospective; however, an independent resource study has yet to be completed on the formation, Contact said.

The proposed LNG terminal is expected to receive, liquefy and export up to about 10 million tonnes per annum (mtpa) of LNG and have on-site storage capacity of 690,000 cubic meters of liquefied natural gas (LNG). North American natural gas supplies are to be transported to Goldboro using existing pipelines and exported by ship to international markets. PPLP is to focus on securing and developing gas assets onshore in Atlantic Canada and the eastern United States for the terminal.

“We are ideally positioned to source and develop long-term sustainable feedstock for the proposed Goldboro LNG Terminal by leveraging our longstanding history in Atlantic Canada and our tight gas expertise from Western Canada,” said Contact CEO Steve Harding. “By combining efforts with Pieridae and their extensive knowledge of North American gas transmission systems and global LNG markets, we believe that the partnership will be a valuable entity integral to advancing the success of the Goldboro LNG Terminal.”

Initial ownership of PPLP is to be 85% Contact and 15% Pieridae. An additional $15.4 million of third-party equity funding for the partnership is being sought and coordinated by Pieridae. If this is secured, it will reduce Contact’s ownership in the partnership to 50%.