Liquefied natural gas (LNG) shipping rates are likely to drop through September because of the economic devastation from the Covid-19 pandemic, but the longer term outlook has improved, Golar LNG Ltd. management said Thursday. 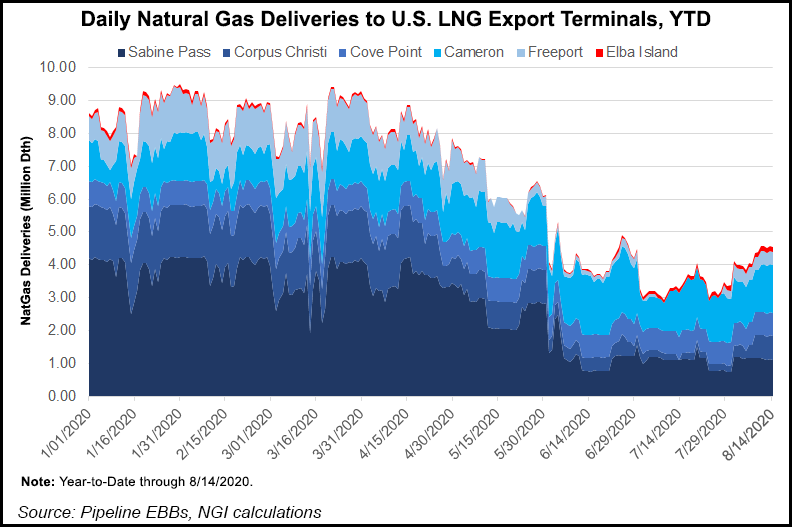 “There is now an emerging optimism among market players who expect a stronger rate environment heading into the autumn and seasonally stronger winter,” management said. “Spot rate sentiment has changed from ‘flat’ to ‘increasing,’ indicating that the market may have passed its low point.”

The second quarter started with the more efficient tri-fuel diesel engine (TFDE) LNG carriers earning daily spot rates of about $44,000, but ended with rates dropping to about $30,000. Ten of the 16 LNG carriers owned by the Golar entities are TFDE-powered, with six steam-powered.

“These lower rates resulted from a combination of seasonal LNG demand decline and lower overall global economic activity resulting from the Covid pandemic,” Golar CEO Ian Ross said during the conference call. “Further, U.S. cancellations kept ton miles low during the quarter, but we still expect a degree of slow steaming and storage to merge toward the end of the year, boosting rates over the northern winter before overall volumes pick up again in 2021.”

“Rising prices are expected to facilitate a re-emergence of regional price differentials, interbasin trading and rising ton miles, all of which will support improving levels of vessel utilization without compromising LNG’s price competitiveness relative to other less environmentally friendly energy sources,” according to management.

Global liquefaction capacity utilization fell to about 75% at the end of June from about 90% in April. Prompt available LNG shipping in the second quarter was typically 10-15 mainly steam turbine vessels, out of a global fleet of 555.

About 30 million metric ton/year (mmty) of global liquefaction capacity is scheduled to come online through 2023, and an additional 100 mmty from 2024-27, according to a Golar analysis. The relatively low levels of capacity scheduled to come online in the next three years, along with a deferral of most sanctionings that were scheduled for this year, have led to a significant reduction in newbuild orders.

Executives said plans are to sanction within six months two floating LNG storage and regasification unit projects offshore Brazil. Another project is set to be sanctioned by mid-2021 for Brazilian power plant that would use regasified LNG from one of the facilities. Projects would be owned and operated by sister company Golar Power, equally owned by Bermuda-based Golar LNG and New York City’s Stonepeak Infrastructure Partners.

“We continue to look at a number of international locations that may be suitable to replicate this model,” Ross said. “Currently, we’re currently examining 15 separate opportunities to internationalize the business.”