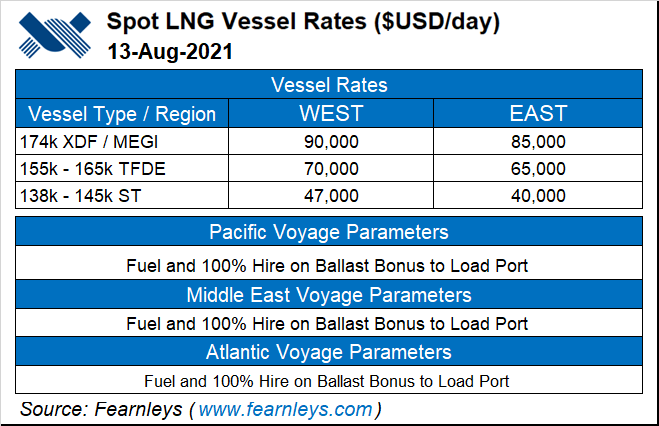 CEO Karl Fredrik Staubo said recently strong demand in Asia, along with new International Maritime Organization decarbonization rules that would cut the number of active older LNG carriers starting in 2023, is likely to keep rates high for the next several years.

“The increased obsolescence of tonnage built in the 1990’s and earlier, coupled with limited additional orders, should together with an expanding LNG trade translate into tight shipping market balance going forward,” Staubo said during Golar’s 2Q2021 earnings call. “Based on the current positive market outlook for LNG carriers, we have reengaged initiatives to refinance our shipping fleet non-recourse to Golar and evaluate alternatives for a separation of our shipping segment.”

Staubo said the spin-off would give investors exposure to a pure-play LNG shipping company. vThe company also has floating LNG (FLNG) assets and is aiming to build that business as well.

“We struggle to get the efficient pricing because people that want the shipping exposure don’t necessarily want the FLNG and vice versa,” Staubo said.  “What we’re considering is just to get the shipping fleet into a separate exposure, and then potentially to hand out the share in the shipping venture.” Instead of holding “one FLNG share with two exposures” an investor could have one share of Golar and another share in a shipping company.

He also said the company is considering several routes, including a partnership with another vessel owner or the public markets.

Fleet utilization was 98% in the second quarter from 93% logged in 2Q2020. Looking ahead, the company fixed an LNG carrier on a five-year charter with the term to start in 2022.

“As with LNG prices, vessel spot rates also remain counter-seasonally strong and one-year time charter rates remain above spot rates, signaling higher rates ahead,” management said. “The term market is also expected to remain active, however the lack of available ships in 2021 means that the focus has shifted to 2022. Most of the order book is now committed and charterers are increasingly focused on securing access to high quality vessels already on the water.”

Stabo also noted higher pricing for LNG carrier newbuilds as costs for raw materials such as steel are inching upward. He said new carriers, quoted at $180 million one year ago, are now going for around $210 million.

“We see early signs of these trends also creeping across to second-hand values across LNG shipping,” he added.

“The combination of economically attractive gas fields and our low-cost FLNG solution produces a backdrop where we create an attractive risk-reward considering where LNG prices are trading today, and where they have been trading historically,” Staubo said.

In terms of current FLNG projects, Golar during the quarter announced an agreement to increase capacity at the Hilli facility offshore Cameroon. The agreement with partners Perenco and Cameroon’s Société Nationale des Hydrocarbures would grow Hilli’s capacity by 200,000 tons with utilization at 1.4 million tons in 2022. The agreement includes an option to grow capacity by another 400,000 tons from 2023 to 2026. Hilli, which is the world’s first facility FLNG facility to be converted from an LNG carrier, offloaded its 59th cargo during the quarter.

Meanwhile, construction on Golar’s Gimi FLNG facility, which would serve BP plc’s Greater Tortue Ahmeyim project offshore Senega and Mauritania, is 72% complete. The facility is on track to sail from its Singapore shipyard in 1Q2023.

Staubo also noted “specific commercial and technical discussions with an existing client” for a newbuild Mark III FLNG design, which would have 5 million tons of capacity.

Golar reported net income of $471.4 million, which included a gain on its sale of Hygo Energy Transition Ltd. and Golar LNG Partners LP to New Fortress Energy Inc. earlier this year. That compares with a $155.6 million net loss in 2Q2020.

Meanwhile, Teekay LNG Partners, which has a fleet of more than 40 carriers, also noted the “counter-seasonally strong market” for spot and term charters over the past six months.

“We believe this market strength could also be a tailwind for Teekay LNG next year as we have a few LNG carriers expected to roll-off of their current contracts during the first half of next year,” CEO Martin Kremin said. “We do, however, continue to have nearly all of our 2021 and the vast majority of our 2022 revenue days already secured on fixed-rate charters and generating consistent cash flow.”

The company, a subsidiary of shipping giant Teekay Group, reported $65.9 million in LNG vessel revenues in 2Q2021, down from $69.2 million last year. Kremin said the results reflected a heavier than normal drydock schedule and he expects them to “bounce back” in the fourth quarter.

The company reported quarterly net income of $53.3 million (53 cents/share) compared with $44.9 million (46 cents) in the same period a year ago.