Fueled by a potential wintertime energy shortage overseas, U.S. natural gas forward prices rebounded sharply from the prior week’s bruising. November prices surged by an average 42.0 cents during the trading period from Sept. 23-29, while the winter strip (November-March) jumped 49.0 cents on average, according to NGI’s Forward Look. 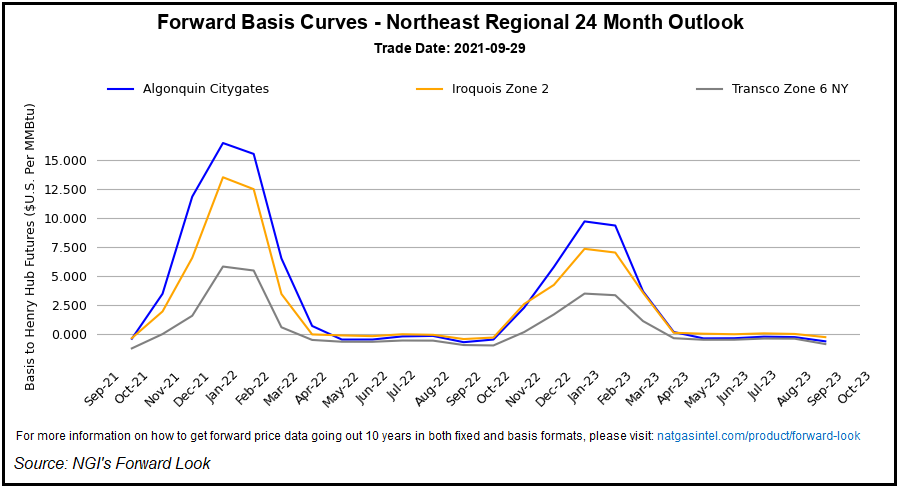 Gains at the front of the curve occurred amid wild price action along the Nymex futures strip. The October contract hit a $6.280 intraday high on Tuesday before rolling off the board at $5.841. The November contract, meanwhile, tumbled in dramatic fashion on its first day in the prompt position in an apparent disconnect from global supply concerns. November settled Wednesday at $5.477, one day after soaring to a $6.318 intraday high.

The final two trading days of the week brought about even more wild swings, in both directions. When the dust settled, the November Nymex contract stood at $5.619, off 24 cents from Thursday’s close.

Even with Friday’s pullback, U.S. gas prices are at their highest levels in years. However, the surge is only a fraction of what has played out in Asia and Europe this summer. The two regions are struggling to refill storage inventories after last winter drained supplies and the hot summer prevented a significant rebuild. Global spot gas prices have soared to more than $30.000/MMBtu, and China caused an even bigger stir Thursday when it called for its energy firms to secure supplies at all costs.

Mizuho Securities USA LLC’s Robert Yawger, director of Energy Futures, said generally speaking, South Korea, China and Japan are the three largest destinations for U.S. liquefied natural gas (LNG) exports. Brazil, the UK and Turkey, are at the next level, and India, Spain, Singapore and the Netherlands tend to round out the top 10, with Taiwan and Portugal, just outside the top 10.

“Asia and European natural gas markets were both trading at all-time record levels this morning before the ‘at all costs’ headline even hit the tape,” Yawger pointed out.

Energy Aspects analysts noted that European firms have been actively restocking ahead of this winter, despite thin or even negative summer 2021 spreads against the winter 2021 strip. Therefore, storage inventories should be similar to supplies in the 2018-2019 winter.

However, Gazprom PJSC is lacking its own inventories in Europe, which means there could be deliverability issues for Russian gas this winter in the event of unplanned disruptions to Russian export pipeline capacity. Additionally, Gazprom may use some of the incremental capacity it would have next year through Nord Stream 2 to refill its storage sites, “detracting from gas available for its discretionary sales to Europe.”

If Russia’s export volumes through winter are lower than expected, the storage drawdown would likely increase over the next several months, according to Goldman Sachs Commodities Research. This would leave European gas markets even more vulnerable to colder-than-average weather and, as a result, increasing the chance of further sharp TTF price spikes during the winter.

“Importantly, the potential bullish impact on the market from a restricted Russia pipeline flow would be particularly significant if Gazprom planned to supply their Northwest European contracted winter volumes at least partly by taking physical delivery at the hub to compensate for lower pipeline flows in the context of already depleted inventories in the region,” said a Goldman team of analysts led by Samatha Dart. “This could create a physical squeeze at TTF,” potentially sending gas prices much higher than they already are.

The two new U.S. LNG facilities slated to come online in the coming months could not come at a more opportune time. Cheniere Energy Inc. has been given federal approval to introduce feed gas into the sixth train at Sabine Pass. Calcasieu Pass also has tendered some cargoes ahead of start-up. Within the next month, feed gas volumes could approach 12.5 Bcf/d.

But while positive for gas prices, there are other factors that pose more downside risk ahead.

Notably, there is little in the way of cold weather on the radar in October. At best, the first chance for any heating demand may arrive in the second half of the month, but even that’s not likely.

Bespoke Weather Services said the pattern continues to favor very warm weather in the northern half of the nation, keeping early-season heating degree days well below normal. A lack of strong heat in the southern United States is keeping cooling degree days low as well.

“It’s hard to move the first half of October’s demand any lower, but, if the back half is also warm, as current indications suggest, we could make a run at 2016’s record for warmest October since 1963,” Bespoke chief meteorologist Brian Lovern said. “Further to that, the pattern looks set to continue its warm theme beyond day 15, meaning that it is not out of the question that we make a run at October 2016’s record low gas-weighted degree day count.”

Despite the unquenching thirst for gas overseas, the balmy fall outlook in the United States bodes well for market players concerned about domestic supplies this winter. After storage refills lagged much of the summer because of robust cooling demand, the milder turn in the weather is seen leading to a string of plump injections ahead.

On Thursday, the Energy Information Administration (EIA) said inventories for the week ending Sept. 24 increased by 88 Bcf, in line with expectations.

The EIA reported that the Midwest and East regions led with builds of 30 Bcf and 28 Bcf, respectively. The South Central added 23 Bcf into stocks, including a 12 Bcf injection into nonsalt facilities and an increase of 11 Bcf in salts. The Mountain region injected 5 Bcf, while Pacific inventories rose 3 Bcf.

Yawger noted that although U.S. inventories are now within the five-year average, “there is demand for LNG that did not exist in the past.”

Nevertheless, market observers are growing increasingly more comfortable with the storage trajectory in the coming weeks. After previously forecasting that inventories could fall short of 3.4 Tcf at the end of October, estimates are now at 3.6 or higher.

A sinking storage deficit versus the five-year average — which could fall to just 150 Bcf by mid-October — and the potential to inject 200 Bcf more than year-ago levels by the end of October may help ease growing upward pressure on natural gas futures, according to EBW Analytics Group.

The firm noted that production also has bounced higher in recent days to reach pre-Hurricane Ida highs, driven largely by the return of production in the Gulf of Mexico. At the same time, any producer with flexibility to rush activity and bring forward incremental production volumes may also be helping bolster totals. However, “there is little short-term ability to add supply, and the net effect is likely tiny,” according to EBW.

“Over the next several weeks, however, producer plans to ramp up production into early winter are likely to be increasingly realized, likely helping production achieve new highs,” EBW analysts said.

Though California has snagged a lot of headlines throughout the summer because of its tight supply conditions and record demand, the Northeast proved it reigns king when it comes to U.S. gas markets in the winter. Forward prices in the Northeast shot up to levels typically seen during the coldest months of the year, not before the calendar has even flipped to October.

Transco Zone 6 NY also mounted hefty increases through the winter, Forward Look data showed. November prices tacked on 73.0 cents to hit $5.451, and December moved up 59.0 cents to $7.149. The full winter strip averaged $8.160 after gaining 92.0 cents on the week, while next summer picked up less than a nickel to average $3.080.

As for the upcoming winter, AccuWeather’s official outlook for the Northeast said cold weather could arrive earlier than usual.

“This winter, I think, is going to be a colder one, at least for the interior sections from the Appalachians to the Ohio Valley and Great Lakes,” AccuWeather senior meteorologist Paul Pastelok said.

Last winter, temperatures across these areas were right around normal, but this year, the winter as a whole is likely to average 1 to 3 degrees below normal, he said.

The first waves of cold air are expected in the Northeast in November, when Pastelok said there could be “a couple of rounds of cold weather and some snow,” particularly across the interior Northeast.

The early arrival of chilly air will be just the first hill on the roller-coaster weather ride that is expected this winter, according to AccuWeather. The severity and frequency of the snow and cold air are likely to let up a bit by mid-December before returning with a vengeance in January.

“That’s the month that stands out,” Pastelok said.

This is also the period of the winter when there may be ample cold air entrenched across the region for snowstorms to cause widespread disruptions.

Sometimes during January, there is a period during which the cold air lets up, referred to by some meteorologists as a “January thaw.” But this coming winter, that respite from the frigid weather could occur a few weeks later, making it more of a “February thaw,” according to Pastelok. This would provide a window for snow and ice to melt before the end of winter when the polar vortex could pay a visit.

“At the end of the winter into early spring, there could be another attempt of the polar vortex being displaced or split,” he said. This would send frigid Arctic air blowing across the eastern U.S., “extending the wintry weather well past March 1, which marks the beginning of meteorological spring.”