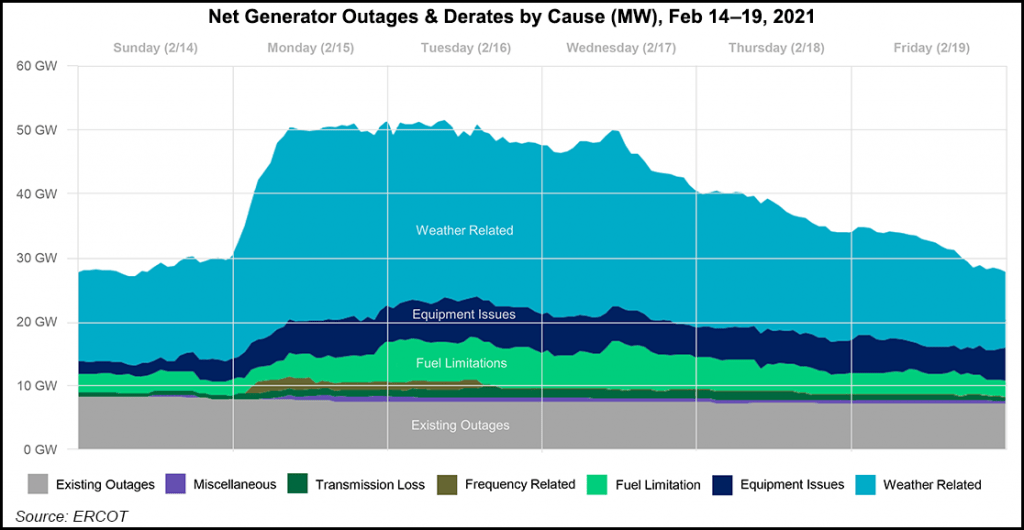 IHS Markit analyst Rama Zakariasaid some of the largest outages occurred in regions with a relatively reliable supply of energy, including the United States and China.

For example, IHS Markit estimated that Winter Storm Uri in February 2021 left more than five million without power in the south central United States, with most of the outages occurring in Texas. The Electric Reliability Council of Texas (ERCOT), the grid operator for around 90% of the state, noted that about 10,500 MW of customer load was shed at the highest point as extreme weather caused “many generating units – across fuel types – to trip offline and become unavailable.”

Others highlighted that oil and gas production, pipelines and gas-fired power plants were similarly ill-equipped to handle the freeze. Within the first few days of the storm’s arrival, about 7 Bcf/d of natural gas production, mostly concentrated in the Permian Basin, had been shut-in by the icy temperatures.

The IHS researchers noted that extreme weather events, such as Uri, “are increasingly impacting supply and demand.”

In the wake of the winter blast, natural gas spot prices in Oklahoma surged up to $999/MMBtu. Meanwhile, the American Gas Association reported record-breaking demand in the United States over a two-day period, with 151.7 Bcf of natural gas delivered in the middle of the storm.

In Europe and China, tight gas and coal supply in the post-Covid-19 demand market also has led to sky-high energy prices, the researchers noted.

The European Union (EU) statistics office, Eurostat, reported in January that more than 20% of the member countries’ energy is generated by renewables. And while the EU continued to add wind to its mix, IHS Markit noted separately that wind generation in France, Germany, Spain and the UK fell by nearly 10% from January to September, compared with the first nine months of 2020.

Typically, thermal generation fueled by oil or liquefied natural gas can balance out variability caused by weather conditions for renewables. However, with decarbonization efforts, fossil fuel supply may be curbed faster than the pace at which demand declines, leading to shortfalls and soaring prices, researchers said.

The higher prices could enable a switch to use more gas and coal versus renewables. However, the ongoing push by investors to transition companies “has broken” that supply and demand linkage, according to IHS Markit.

While pressure from investors ramps up, researchers said there is still “an unsynchronized pace of transition in power generation and transmission and distribution infrastructure.” That has left energy markets open to heightened volatility.

Similarly, China’s hydro-heavy market is also vulnerable to weather conditions, researchers noted. In the province of Guangdong, soaring power demand from factories and hot weather resulted in rolling blackouts in 2021. And in northeastern China, the market cap on coal production has led to supply shortages. Nearly 98.5 million homes and businesses were affected by outages last year, researchers said.