Global oilfield equipment spending is forecast to total $622 billion between 2016 and 2020, with onshore growth surpassing the offshore by 2017, Douglas-Westwood said Wednesday. 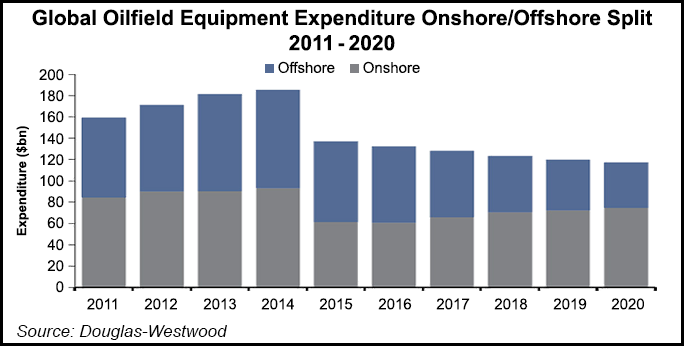 In the quarterly “World Oilfield Equipment Market Forecast 2016-2020,” the analyst group said capital spending in the oilfield services sector (OFS) overall actually will fall by 3% a year between now and 2020, but onshore spend should begin to return beginning next year.

An overbuild of mobile offshore drilling units from 2011 to 2014, combined with low drilling activity, resulted in a “severely oversupplied offshore rig market,” and there are not going to be substantial orders to 2020. “Consequently, global offshore rig expenditure will fall 88% from 2013’s peak by the end of the decade,” with most of the spend focused on maintaining the current fleet, the DW analysts said.

Fixed and floating production platform capital expenditures (capex) has remained “relatively buoyant” over the past two years mostly because of long lead times to work in the offshore and a big backlog of projects that had commitments before the oil price downturn.

“Post-2017, expenditure is expected to see significant decline as this backlog is cleared, with a substantial decline in fixed platform expenditure across multiple regions,” the report said. “Floating production system expenditure will see similarly large declines in 2018, however, incremental gains are expected over 2019-2020 as a number of floating liquefied natural gas projects begin construction despite installation not expected within the forecast period.”

In the onshore OFS sector, capex has been severely impacted by the decline in commodity prices, with spend falling by one-third in 2015 from 2014. Capex is expected to decline by $700 million more this year.

“Service company and contractor equipment spend has borne the brunt of the industry downturn, where reductions in drilling activity have compounded with pricing pressures,” said analysts. “Similar effects have also been seen for operator spend, however, as this is concentrated on production phase equipment, such as artificial lift, pumps and valves, decline has been relatively less severe” because of the large installed base that requires replacement and routine servicing.

After two years of declines, global onshore growth should return in 2017, outstripping offshore spend by more than $3 billion for the first time since 2012.

“This is a function of an anticipated recovery in oil prices in the latter half of 2016, which will increase drilling activity in more reactive onshore plays,” according to DW. “Growth in activity will lead to increased demand for a wide variety of drilling-related equipment, including tubulars and drillbits. Furthermore, equipment which has been idle and unutilized since 2014 will require significant expenditure to return to a work-ready state as activity recovers, increasing expenditure on surface pumping and conveyancing tool fleets.”

The “headline figures for the global oilfield equipment market show a bleak future for many exposed to the sector,” but “the picture is not nearly as black and white as it first appears. Onshore is a particular bright spot and opportunity, provided oilfield equipment manufacturers are able to position themselves correctly over the coming months.”