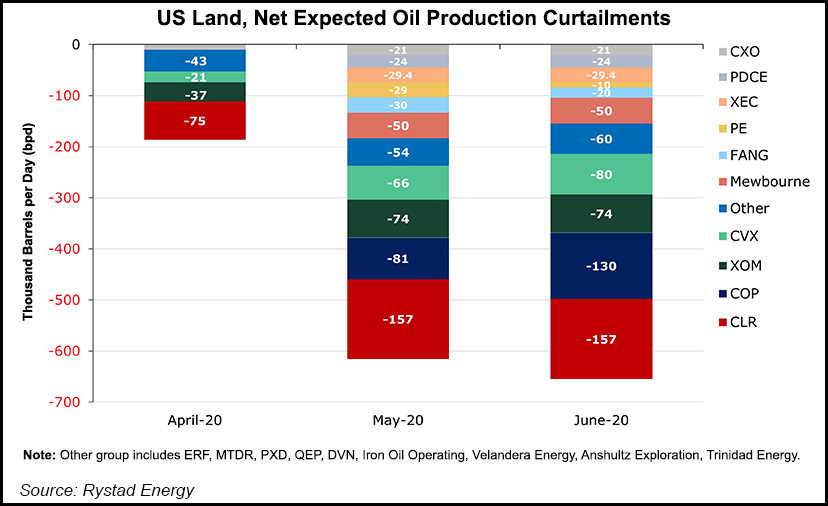 “The second quarter of 2020 will see the largest volume of liquids production cuts, including shut-in production, in the history of the oil industry,” analysts said, with North America, the Organization of the Petroleum Exporting Countries and Russia driving most of the cuts.

“The Great Shut-in, a rapid and brutal adjustment of global oil supply to a lower level of demand is underway,” said IHS Markit’s Jim Burkhard, vice-president and head of oil markets.

He added, “All producing countries are subject to the same brutal market forces. Some will be impacted more than others. But there is nowhere to hide.”

“When it comes to the where, why and how of production cuts, the wide range of technical, logistical, regulatory, contractual, and financial conditions means there is no single set of answers,” said IHS Markit’s Paul Markwell, vice-president of global upstream oil and gas. “But under these market conditions, it is pretty clear where production will be cut. Nearly everywhere.”

Analysts at Rystad Energy, meanwhile, forecast U.S. oil production shut-ins of 616,000 b/d for May and 655,000 b/d in June as a result of the supply-demand imbalance created by Covid-19.

The figures do not tell the full story of U.S. curtailment, as they are based only on the official guidance released so far by 19 producers, the Rystad team said, noting, “Actual production cuts are probably larger and are not only the result of shut-ins but also come from the natural decline from existing wells as new wells and drilling are reduced.

Based on the latest figures from U.S. producers, Rystad analysts estimate that about 187,000 b/d of output was shut-in during April.

“Given the severity of the current market situation and significant production curtailments announced already since April, shale producers are not relying on natural decline but are rather choosing more drastic methods to reduce their output substantially and fast, which is also being confirmed in the recent communication,” said Rystad’s Veronika Akulinitseva, vice-president for North American shale and upstream.

The severity of the oversupply also has been reflected by the buildup of U.S. commercial crude oil inventories, which stood at 532.2 million bbl for the week ended May 1, up 4.6 million bbl from the previous week and 12% above the five-year average for this time of year, according to the Energy Information Administration’s Weekly Petroleum Status Report published on Wednesday.

The report also said that over the past four weeks, U.S. crude oil imports averaged about 5.4 million b/d, or 20.6% less than the similar four-week period last year.