Operators already have pulled the trigger on more oil and natural gas projects worldwide to date this year than they did throughout 2016, according to an analysis by Rystad Energy. 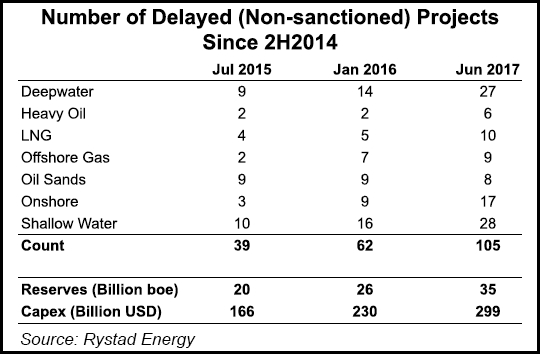 “We find 17 of these delayed projects have since been launched, accounting for an estimated $78 billion of development spending,” analysts said. About 40% of the spending is for Chevron Corp. unit’s Tengizchevroil Tengiz expansion in Kazakhstan, Rystad said.

In addition, projects in China, Iraq and Vietnam, as well as an oilsands scheme, are expected to reach FID this year.

“In spite of this apparent positive momentum, the FID delay list has continued to grow,” Rystad research analyst Readul Islam said. “Since we last published in January 2016, the list has grown in almost all themes, except oilsands, which is not surprising since oilsands projects are largely confined to one province in Canada, while all other themes have a global candidate pool.

“The ongoing results of the oil price pain is clear to see — still over 100 projects delayed, accounting for nearly 35 billion boe and $300 billion spend estimate at delay,” Islam said.

Earlier this year analysts with Raymond James & Associates Inc. said 2017 would be the first year with some “next-generation” startups post the 2014 industry meltdown. Based on a survey of the industry projects, “2018 will be a trough year, i.e. the year with the lowest amount of new capacity coming online,” analyst Pavel Molchanov said in February.