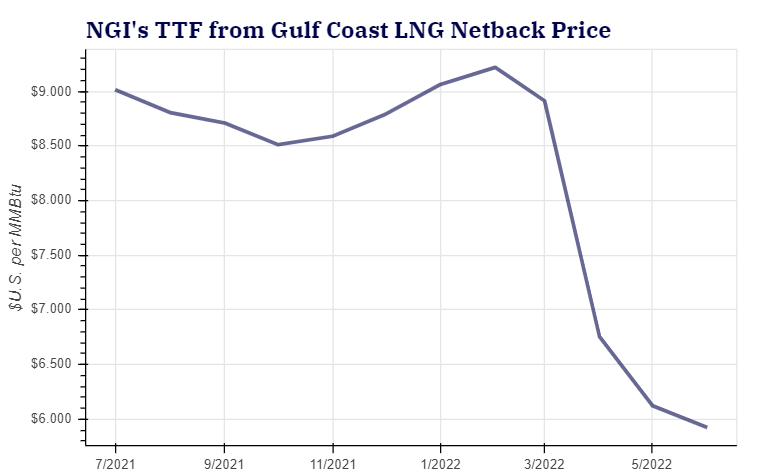 The prompt Title Transfer Facility (TTF), Europe’s leading gas benchmark, hit a multi-year high of $10.241/MMBtu Thursday before falling to finish the week Friday at $9.883. A decline in carbon prices, along with a jump in Russian and Norwegian pipeline imports pressured prices on Friday. Nord Stream 2’s announcement that pre-commissioning work would begin Friday also weighed on the contract.

But storage inventories remain at just 42% of capacity, compared to the five-year average of 56% for this time of year. Meanwhile, U.S. and Australian maintenance, and strong buying ahead of the summer months had the Japan-Korea Marker (JKM) front-month futures contract climbing all last week. JKM spot prices were again assessed near $12 on Monday.

A lack of feed gas demand in the United States last week wasn’t enough to offset hot weather across much of the country. NGI’s Weekly Spot Gas National Avg. climbed 13 cents to $2.930 on hotter forecasts. Prompt Henry Hub futures also ended the week sharply higher, led by news that part of the Texas Eastern Transmission pipeline system could operate at a reduced pressure for several months. The July contract closed Friday at $3.296, up 22.6 cents from the start of last week. Henry Hub finished higher on Monday at $3.352.

Hot weather is also forecast for Japan and South Korea, along with central and western Europe this week. In China, meanwhile, hot weather in the southern province of Guangdong prompted officials there last week to remove the price cap for some gas-fired units. The move is aimed at encouraging more electricity generation to alleviate power shortages in the industrial center. Additional gas-fired generation could boost LNG imports in China, where buying has been strong this year.

In the oil markets, prices are also rising. The Brent contract for August delivery hit multi-year highs on Friday to close at $72.69/bbl and climbed again on Monday to finish at $72.86.

“The price forecasts of even more upside potential are materializing this week as oil prices rise further on a bullish cocktail of rising demand, summer maintenance and a vaccination breakthrough,” said Rystad Energy analyst Louise Dickson. “The freedom of movement of people is scaling up in the U.S. and Europe in particular, where a softening of Covid-19 restrictions has boosted road and aviation traffic.”

Oil’s recent climb is a positive for oil-indexed LNG contracts, which are typically sold based on an average crude price over the previous three to six months.

In other news, a communique released after the G7 summit over the weekend focused heavily on the energy transition and supported a “green revolution” and efforts to limit the rise in global temperatures. Members also committed to achieving net-zero emissions by 2050.

As the energy transition accelerates, Royal Dutch Shell plc said last week that it too would speed up efforts to cut its own emissions. CEO Ben van Beurden said the company would act faster after a Dutch court found in May that the company’s climate plans were inadequate.

Despite a broader global push away from fossil fuels, the European Union on Friday agreed to continue supporting natural gas projects outside the bloc, making some eligible for EU funds and streamlined permits.

Oman LNG also said last week on social media that it has signed a deal for Shell to deliver the country’s first carbon-neutral LNG cargo from an export facility in Qalhat, Sur. The announcement is another on a growing list of suppliers that have pledged to offset cargoes with emissions credits or more closely track the emissions tied to their shipments.