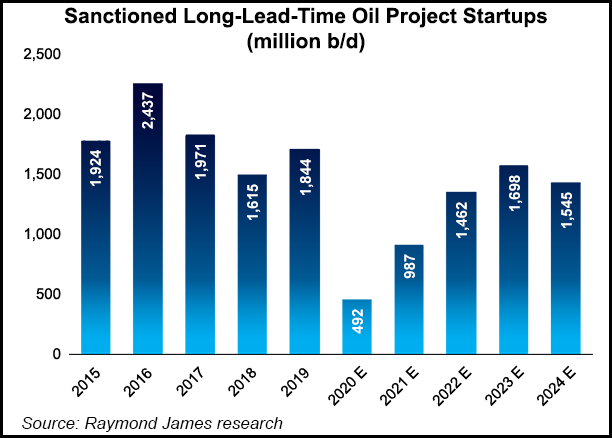 The analyst team led by Pavel Molchanov in a note to clients on Monday said forecasting the peak of global oil demand is unsure “but suffice it to say, this question is steadily rising on the agenda of top-tier oil producers…that have a traditional overweight to long-lead-time projects.”

Some of the blame can be put on Covid-19’s devastating impacts to the economy and on oil and gas demand, noted Molchanov.

“Of Covid’s many effects, one of them has been to accentuate the risk that demand may peak sooner — and at a lower level — than just about anyone would have predicted 12 months ago,” he said.

To put it bluntly, the oil crash earlier this year only exacerbated a trend that should mark 2020-2021 as a trough for project startups. Going forward, “there will be no realistic return to pre-Covid levels,” Molchanov noted.

The message “is bullish for medium-term oil prices,” said Molchanov. “At no point in the next four years will the pace of project startups return to where it was in 2019.”

Most of the upcoming startups were approved before the pandemic, analysts noted. It’s now a “good bet that there will be even fewer startups in the latter half of this decade, with project development never fully recovering to pre-Covid levels.”
Besides the spending collapse, operators are facing another headwind that is “more structural and long-lasting,” analysts said. There are now “heightened concerns about the eventual peak in global oil demand, in the context of decarbonization, and the resulting challenge of stranded assets.”

Classifying some of the traditional oil and gas portfolios as “stranded assets” could become more relevant as the majors devise their long-term decarbonization strategies.

It may be voluntary/self-motivated, as is the case of the European majors, or legally binding under proposed decarbonization laws.

“Simply put, a conventional or shale well that largely depletes within five years faces minimal risk from the prospect of demand peaking (for the sake of argument) by 2030,” Molchanov said. “By contrast, projects that are designed to run at a plateau level of production for decades could have their economics meaningfully damaged, depending on what happens with demand in 2030 and thereafter.”

Projects will continue to be sanctioned. However, companies that have or are adopting energy transition targets may become “more reluctant than before to commit large amounts of capital amid heightened uncertainty.”

Follow the money, according to Raymond James. Investors may be focused on dividends and capital discipline but it may coincide with pressure from environmental, social, governance activists and climate advocates, Molchanov said.

“We should expect to see many more headlines about stranded assets in the years ahead.”