Although global oil demand has come roaring back to about 89% of pre-coronavirus levels, it is expected to plateau around 92-95 million b/d, or 92-95% of pre-Covid levels through the first quarter of 2021, according to a new analysis by IHS Markit. 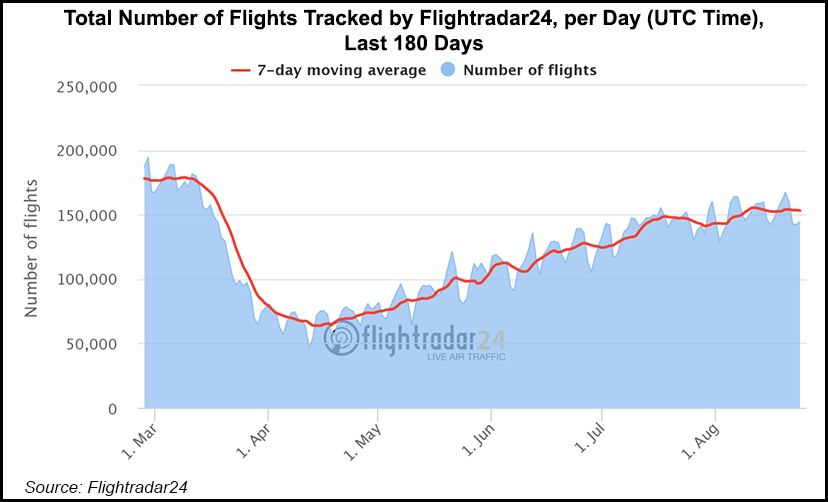 “The meteoric rise of world oil demand from the lowest lows of the Covid crash is going to come up just short of a full comeback, at least for now,” said IHS Markit’s Jim Burkhard, vice president and head of oil markets. “For demand to fully return, travel – especially air travel and commuting to work – needs to get back to normal.

“And that won’t happen until there is containment of the virus and effective vaccines.”

World oil demand has swelled by 13 million b/d over the last four months since bottoming out in April amid the pandemic-induced containment measures and economic slowdown, the IHS team said.

The number of air flights globally is now at about 30% below February levels, versus 78% below in April, researchers said. However, actual jet fuel consumption is still 50% below prior year levels since shorter-distance flights have recovered more quickly than long-haul flights.

After falling to 50% of prior year levels in April, U.S. retail gasoline sales rebounded sharply as well, but have since stalled at around 17-18% below 2019 levels, researchers said.

U.S. gasoline sales are bigger than total oil demand for any other market except mainland China, underscoring U.S. gasoline’s importance as a proxy for gauging total global oil demand, the IHS team said.

Burkhard noted that, “Hitting the pause button on demand growth doesn’t mean a return to the supply overhang that cratered prices back in April,” explaining that the Organization of the Petroleum Exporting Countries and its allies, aka OPEC-plus, “have rediscovered production restraint since then and U.S. output is expected to be lower as well.

“That means that markets can continue to rebalance, even if a full return to pre-Covid demand levels is put off for the time being.”

Analysts at Tudor, Pickering, Holt & Co. (TPH) also noted Tuesday that the resurgence in air travel is beginning to level off.

Citing data from Flightradar24, TPH analysts observed that the seven-day moving average for global daily flights was up about 1% week/week at about 153,000 flights.

“This is the second week in a row of only small improvement,” TPH analysts said, “which starkly contrasts from July when flights rose 15% from the beginning of the month.”