The global natural gas squeeze has been festering, but U.S. cargoes to overseas markets are unlikely to save the day as winter draws near, according to a group of industry experts. 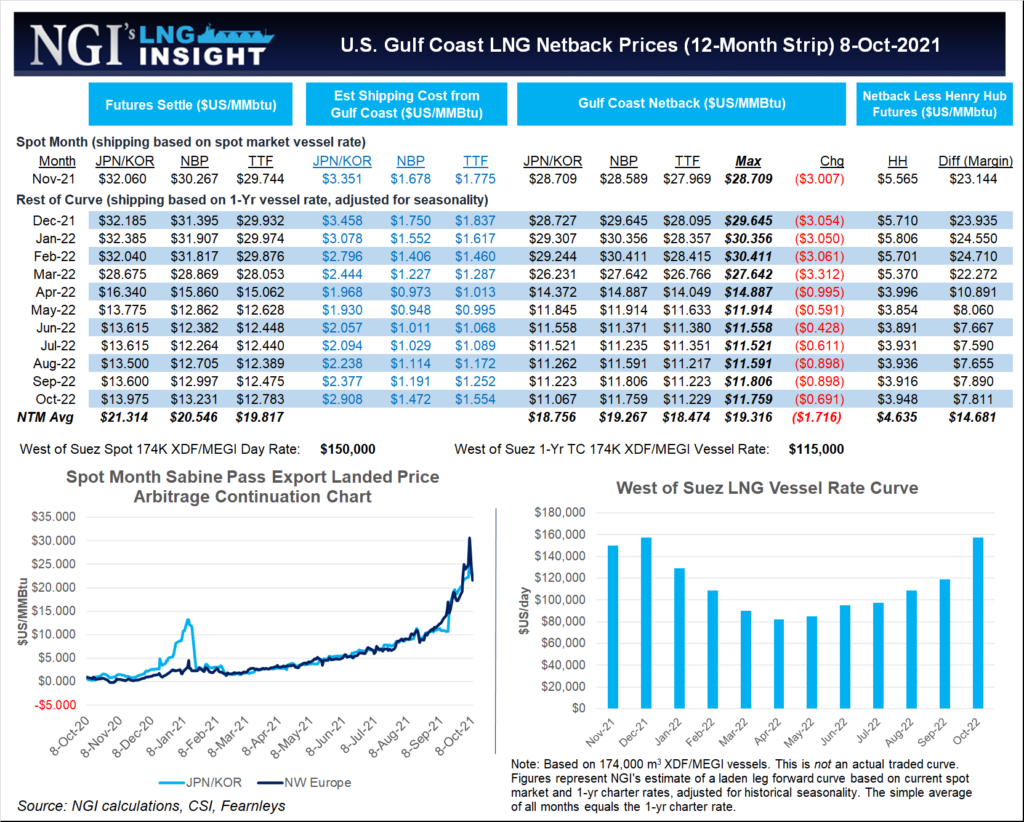 In a series of webinars hosted last week by Raymond James & Associates Inc., executives offered their views on the risks facing the gas markets here and abroad.

“Global natural gas represents about 25% of global primary energy supply and is currently in a ‘you name a problem, and it is probably happening right now’ type of situation,” Weston and analyst colleague Justin Jenkins said following the webinar.

Worldwide gas markets are facing “low inventories from a severe winter last year” and “various forms of supply constraints,” they said. Geopolitical issues and lingering Gulf of Mexico hurricane-related disruptions have piled on, along with the “relatively high-cost fuel switching alternatives” of oil, coal and propane.

LNG No Longer ‘Special and Different’

Liquefied natural gas (LNG) cargoes from the United States are unlikely to solve the overseas energy shortages this go round, said Poten’s Kristen Holmquist, who is the forecasting manager. “The LNG market is functioning more and more as a regular commodity market…We thought it was special and different, but it’s a normal commodity market. To that end, prices now reflect market sentiment.

“It’s hard to say whether prices should be $10 instead of $30, but I do think this market is becoming a real and potential problem. I don’t think it’s been exaggerated. We’ve kind of seen it coming, with gas going to Asia, not going to Europe. This is real.”

Could there be a price point when U.S. gas buyers close the door? It’s unlikely, Holmquist said.

The calculated netback as of Monday was $27, according to Holmquist. That means U.S. gas would have to hit that level “before people start to cancel LNG cargoes,” Holmquist said. “I’m not a trader, but that seems unrealistic.”

The surging gas prices are forcing some countries to revert to oil or coal generation to ensure they can keep the lights burning.

“The last couple of years we’ve seen LNG contribute to this huge surplus of gas in Europe, and we don’t see that happening this winter…

“There’s still very strong demand in Asia,” but “LNG is not going to be able to solve the problem this winter like it was able to in the last couple of years.”

For one thing, Lower 48 exploration and production activity hasn’t returned to pre-pandemic levels. The number of domestic oil and gas rigs in operation is nearly double the number a year ago.

“We are definitely on the right track,” Holmquist said. “But it’s still less than at the beginning of 2020,” when more than 800 were pumping oil and gas.

With commodity prices soaring, “at any other time, we would have seen a huge surge in investment,” she said. “What we’re seeing instead is that companies are being very disciplined” in capital spending. “It’s a direct reaction to what happened last year,” as demand tanked and some companies collapsed.

“So, prices are so high and U.S. drillers are sluggish about reinvesting.”

Things are inching forward — on the oil side. The Organization of the Petroleum Exporting Countries is bringing on some oil production, but slowly. The Energy Information Administration also reported last Wednesday that domestic petroleum demand rose the previous week, while stronger crude production and imports drove inventory higher for a second straight week.

“We’re in a cycle where oil and gas prices are going to be higher, but we need a shift in the mindset to bring investment back up,” said Holmquist.

Some gas-directed rigs are being raised in the U.S. onshore, but it’s “not at a substantially faster rate than the oil plays,” Holmquist said. “It’s the same kind of discipline observed across the sector.

“A lot of the gas that we’ve been getting is actually from associated gas from oil…As oil production starts to come up, we may see gas kind of come up. But investments in the Haynesville and Marcellus shales have not kickstarted, and production is not being added very rapidly.”

Are Gas Pipeline Constraints Ahead?

“We’ve exhausted capacity across Louisiana, with demand growing on the Gulf Coast,” he said.

As the Sabine Pass LNG expansion comes online and Calcasieu Pass prepares to ramp up exports, getting supply to those facilities is going to be a challenge. In addition, a lot of the Lower 48 gas growth, via associated gas from oil wells, is from the Permian Basin, where pipeline constraints are likely late in 2022 or early 2023, Scott said.

“Fundamentally, we’re having a problem getting gas to where demand growth is as well.”
As heating season begins, U.S. gas storage levels may not be as big a concern as they were a month ago. Where the storage is located is a bigger issue, according to the BTU Analytics expert.

“Regionally, it matters a lot,” Scott said. “There’s been a big shift in LNG on the Gulf Coast. And historically, the Gulf Coast serves peak winter days…It’s now being used to meet summer load. We saw withdrawals over the summer, which created regional dislocations where we have capacity to meet peak day swings as well.”

Without additional storage capacity and as more U.S. export projects come online, problems may be “exacerbated over time,” said Holmquist. “We’ve seen U.S. gas demand climbing, and a ton of projects” that are near a final investment decision. “We don’t think they are all going to happen, but even if some did, it would exacerbate storage on the Gulf Coast.”

Looking ahead, a “normal” winter would mean “things don’t look that crazy” from a pricing standpoint, Scott said.

“If we look at the year/year comparables, it’s much looser and supplies are already growing…Coal production has rebounded, so from this point, a normal winter would balance and we would see loosening in the U.S.” and declining gas prices. “We’re probably range-bound until we have some certainty on winter weather.”

China, which is working to end its coal consumption, has been consuming a lot more gas. That’s unlikely to ebb this year.

“My forecast for China is that gas demand will be what it was last year,” Holmquist said. “Last year was high because of a cold winter. There’s been a step change in usage too. Obviously, if there are more cuts in power generation than we are expecting, that could lead to lower demand.”

Still, Japan, Korea and Taiwan “have no choice, they have to bring in gas.” Some gas curtailments have been seen in India, Pakistan and parts of the Asia Pacific because of the “high price environment.” That has led to some “switching back to oil generation and turning to domestic production whenever possible.”

Europe poses its own special challenges, said Clermont’s Alexandre Shmatok, who is head of LNG, Gas & Power. Speaking on the webinar from London, he said, “I’m almost like reporting from the eye of the hurricane here. The UK has absolutely sleepwalked into a profound gas crisis,” he said.

The UK is “particularly vulnerable” to energy crises because it relies on imports. Gas supplies 40% of the generation, he noted. The UK also has “virtually no gas storage; it’s about 1% of total demand…To top it off, the one power line into the UK from France…failed.”

In mid-September, a fire at a major electricity converter station in the UK was shut down, halting power from one  of two cables that traverse the English Channel from France, the UK’s largest energy supplier. The outage was expected to continue until mid-October.

NGI’s David Dutch, vice president of Business Development, said with all of the constraints and LNG prices soaring overseas, “I see high tail risk on the bull side this winter.”

The Henry Hub strip is indicating that “we are in deep contango from this winter to next winter. It’s an extremely bullish environment to be trading in. It caused volatility to explode…”

As to what the forecast for pricing may be, Dutch said that “weather trumps everything…We have to watch weather, storage draws” and LNG prices overseas.

“But this tail risk is the key theme for this winter. In all my years of trading, I’ve never seen such bullish tail risk…”

In an open letter sent in September to the U.S. Department of Energy (DOE), the Industrial Energy Consumers of America called for reducing LNG exports to prevent a supply crisis this winter.

The trade group urged Energy Secretary Jennifer Granholm to take “immediate action” under the Natural Gas Act to allow U.S. inventories to reach the five-year average storage levels. The letter also advised that DOE place a hold on all permits and approvals on LNG export facilities in the Lower 48.

The experts said any attempt to hem in U.S. gas exports would be a no-go.

“I don’t know what mechanism the government could use to do that,” Holmquist said. “These are contracts.” Any attempt to prevent exports “would immediately go to court…”

All U.S. cargoes, said Scott, are done “under import-export licenses.” They could be adjusted, he said. And he speculated that there are presidential powers that could come into play to act “in the best interest of the United States.”

However, “these are things that are highly litigated,” Scott said.