Natural gas prices across the world climbed higher on Tuesday, fueled by the prospect that there will be energy shortages from Europe to Asia this winter. 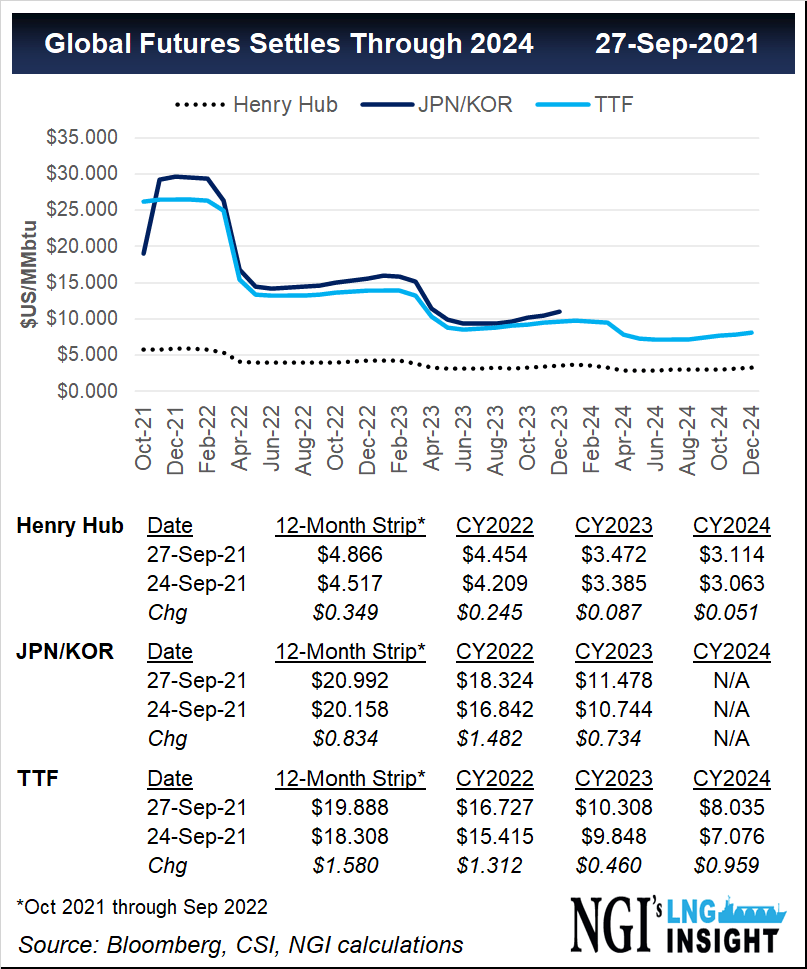 British and Dutch benchmarks closed higher Tuesday, beating an all-time record set Monday after finishing close to $30/MMBtu. In the United States, prices also continued climbing toward $6 as the October contract was set to expire Tuesday, also surpassing a high for 2021 on Monday. In Asia, spot liquefied natural gas (LNG) prices for the second half of October were assessed at more than $31.

Coal, carbon and wholesale power prices have also surged as power generators across the world scramble to meet demand.

“Concerns are still big regarding supply during the coming winter, as storage levels are still well below the seasonal normal,” said trading firm Energi Danmark in a note on Tuesday. “Some improvement in near-term supply is not enough to stop the market from climbing and pulling the related markets upwards as well.”

Storage inventories are low in Asia, Europe and the United States. However, Europe has been particularly hard hit as it battles through declining domestic production, a cut in pipeline imports and competition for LNG cargoes with Asia. Flows from Russia into Germany at the Mallnow compressor station on the Yamal-Europe pipeline plummeted by 57% day/day on Tuesday. Russia has also reportedly grappled with strong domestic demand this year, cutting into its abilities to send additional supplies to Europe and raising questions about its geopolitical maneuvering.

At least seven energy suppliers in the UK have folded amid astronomical gas prices, French energy retailers are also struggling, and Norwegian grid operator Statnett SF warned of low hydropower reservoirs and their threat to electricity supplies. Statnett also serves the UK, which is already facing grid problems. National Grid plc last week delayed by a month the partial restart of an interconnector with France that caught fire in early September.

Manufacturers across Europe also continue to curb output because of high gas prices. BASF SE became the latest to scale back, announcing Monday a cut to ammonia production at facilities in Belgium and Germany.

In the UK, Business Secretary Kwasi Kwarteng warned last week that more energy suppliers could fail this year as prices continue soaring. To make matters worse, the country is also facing gasoline shortages from a lack of delivery drivers.

Meanwhile, China ordered emergency power cuts last week amid supply shortages. The country has made an aggressive return to the LNG spot market as it looks to stockpile enough natural gas and coal for the winter months.

The unfolding crisis comes before the peak energy demand of winter 2021-2022 has even started.

“If we experience a cold winter, this market could get very ugly for regional gas buyers caught short in the inelastic demand period of the winter heating season,” Evercore ISI analysts led by Sean Morgan said in a note to clients Tuesday.

The outlook is so volatile that Citigroup Inc. more than doubled its Asian and European gas price forecasts last week, indicating prices could go to $100 if winter is colder than normal.

“It is only now that the market is feeling the supply damage the Covid-19 pandemic brought, as the production capacity destruction was hidden behind the veil of the damaged demand, until recently,” said Rystad Energy oil analyst Louise Dickson.

In the United States, prices continued to rally at the start of the week as the October contract was set to roll off the board at the close of trading Tuesday.

“While the rally’s proximate cause was end-of-month positioning, rumors that Sabine Pass Train 6 was firing up yesterday likely added more fuel to the amped-up rally,” EBW Analytics Group said of Monday’s action.

Freeport LNG also restarted last week and began working through a backlog of tankers after being offline for nearly a week following a power outage caused by Tropical Storm Nicholas. Elsewhere in the Atlantic Basin, Peru LNG restarted last week, shipping its first cargo since the terminal shut down in June.

In other developments last week, New Fortress Energy Inc. (NFE) finalized a deal with Sri Lanka to take a 40% stake in a 310 MW power plant. Under the agreement, NFE would also construct an LNG receiving terminal to supply the nation with 1.2 million gallons/day.

In Europe, Naturgy became the latest company to deliver a carbon-neutral LNG cargo, announcing that it has supplied Spain with its first such shipment. The company offset the carbon emissions associated with the cargo from the wellhead to the receiving terminal. Russia’s Sakhalin Energy also said this week it would deliver its first carbon-neutral cargo next month to Japan’s Toho Gas Co. Ltd.