A rally in Asian and European natural gas prices lost steam last week, but fundamentals remain unchanged as the coming months are still expected to be tight. 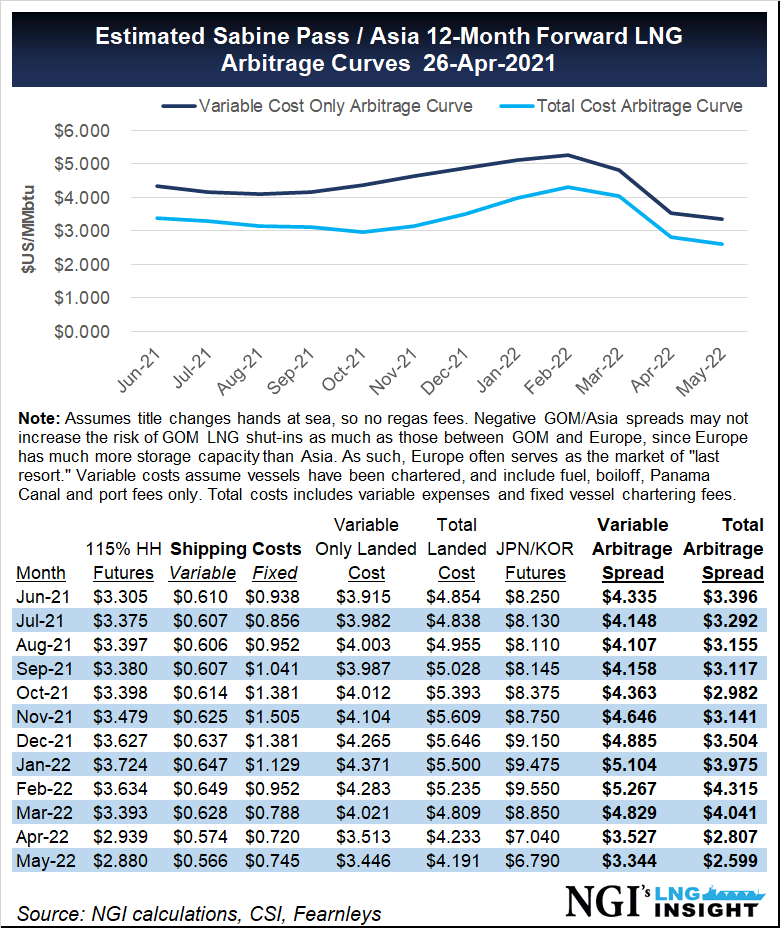 European futures closed higher on Tuesday, recovering some of last week’s losses as the near-term curve was lifted by lingering cold, weak Russian pipeline imports and ongoing strength in carbon prices, which incentivize the use of natural gas in the power sector. Storage inventories on the continent remain low, with only 29.6% of capacity full.

Asian buying is also expected to hold up and support higher prices. Through the summer months, Japan-Korea Marker futures are currently trading at a $1.00/MMBtu-plus premium to the Title Transfer Facility, Europe’s leading natural gas benchmark. The spread makes it more attractive for U.S. offtakers and others to move cargoes to the region to satisfy restocking and upcoming cooling demand.

North Asia spot LNG prices were largely unchanged Tuesday at levels near $8.00. They had been flirting with the $9.00 mark in recent weeks. A massive Covid-19 outbreak in India, which now accounts for nearly half of all new cases worldwide, has cut into spot demand in the country, where buying was already slowing on higher prices. Emergency declarations in Tokyo, and the western Japan prefectures of Kyoto, Osaka and Hyogo, could further threaten demand in the world’s top LNG importing country.

Meanwhile, U.S. natural gas prices increased for a second straight day on Tuesday as storage levels appeared headed for a deficit among colder weather. Prices are also finding support from a projected decline in near-term production and strong export demand as feed gas deliveries to LNG terminals remain near capacity.

U.S. LNG is also likely to benefit from Equinor ASA’s announcement Monday that its Hammerfest LNG export terminal in northern Norway would remain offline until March 2022,  leaving a small supply gap on the continent. A fire at the plant last year requires extensive repairs. The company initially expected to have the facility back online in October.

The continued strength and growth of U.S. exports created another increase in the amount of LNG spot trading last year, according to the International Group of Liquefied Natural Gas Importers (GIIGNL). In its annual report, GIIGNL said spot deals accounted for 40% of all LNG trade last year, compared to 34% in 2019.

Also in the United States, Venture Global Inc. was cleared last week to introduce fuel gas to a turbine at its Calcasieu Pass export project in Louisiana, which continues to move closer to a 2022 in-service date.

Elsewhere last week, Japan pledged continued support for overseas LNG projects. The country still sees the super-chilled fuel as key to the energy transition and crucial to meeting its target of carbon neutrality by 2050.

The announcement came ahead of a climate change summit hosted by the United States, which announced it would target a 50-52% reduction in economy-wide greenhouse gas (GHG) pollution by 2030 versus 2005 levels. The announcement was one of several aimed at further cutting pollution from world leaders that participated in the event.

As part of such efforts, SEA-LNG last week objected to a report released by the World Bank that found LNG is unlikely to play a significant role in decarbonizing maritime transport. The World Bank said ammonia and hydrogen produced from renewable energy are more promising options for the sector.

However, SEA-LNG, which advocates for more widely adopting the fuel for shipping, said the report was too prescriptive in providing solutions to clean up the sector and trying to predict the timing of future technology.

“Waiting for future fuels and not fully utilizing LNG, which is safe, proven, competitive and available today, is a mistake,” the multi-sector coalition said, adding that the maritime industry must take advantage of LNG’s “confirmed” 23% reduction in “well-to-wake” GHG emissions.

“To continue to wait for unproven alternatives only makes the current GHG and local emissions problems worse.”

The flood of hydrogen-related announcements also continued last week. Utility Uniper SE said it has an agreement with energy service provider EWE AG to develop another hydrogen hub in the German state of Lower Saxony near the North Sea. Uniper said earlier this month it was also aiming to establish a national hub for hydrogen in Wilhelmshaven, Lower Saxony.

The world’s largest oil trader, Vitol, also said Monday that it has acquired a 10% interest in Gen2 Energy, a Norwegian producer of green hydrogen. Vitol has been working to expand its renewable energy portfolio.