European and Asian natural gas prices continued soaring higher Wednesday with the market on edge about two key supply outages in Russia and the United States. 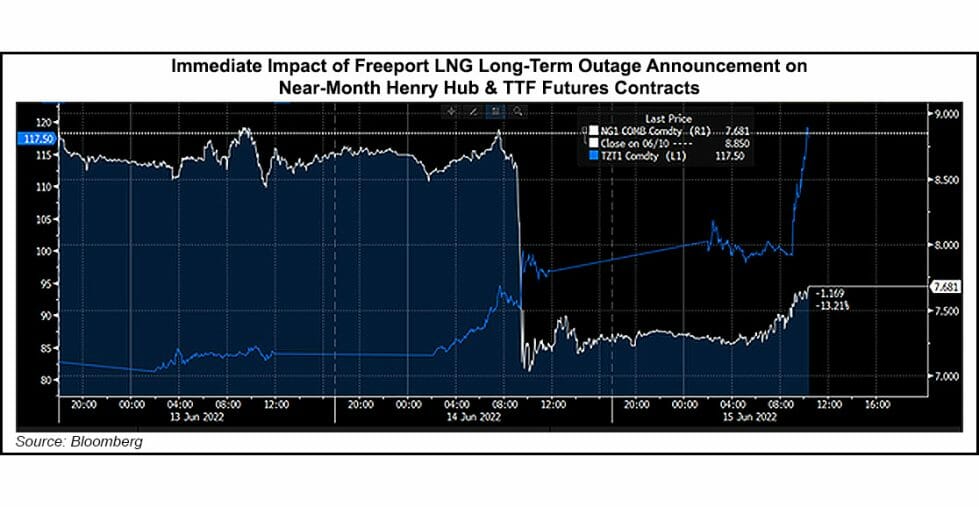 NS1 is one of the largest routes for moving Russian gas to Europe, but maintenance issues are set to cut deliveries by nearly 60%. Russia is Europe’s largest gas supplier. Moreover, roughly three-quarters of all U.S. LNG volumes have made their way to the continent this year, which is poised to be hit hardest by the severe cut in supplies.

“This will make it a challenge for Europe to meet its storage target this winter as the region is now losing supply from East and West, and the continent could be in for a winter season of sustained high prices as a result,” said Rystad Energy analyst Zongqiang Luo.

According to the U.S. Energy Information Administration, the European Union and UK imported 14.9 Bcf/d of LNG between January and May to help refill depleted storage inventories and diversify supplies away from Russia. That was 66% more LNG than the continent imported during the same period last year.

Freeport LNG alone provided 2.5% of European demand, or 1.2 Bcf/d last month, according to Rystad. Sanctions against Russia that have stranded equipment abroad have forced Gazprom PJSC to limit operations to only two units at NS1’s Portovaya compressor station. That was set to cut the operational capacity from about 6 Bcf/d to 2.3 Bcf/d on Wednesday.

Europe has set forth a nonbinding target of filling its storage inventories to 85% of capacity by the end of October. Inventories were filling rapidly and had moved closer to the five-year average. However, analysts at Goldman Sachs Commodities Research said in a note to clients Wednesday that stocks would struggle to meet that target if Freeport stays offline for more than 70 days.

In an update Tuesday, Freeport said it doesn’t expect partial service to resume for about 90 days. American Petroleum Institute CEO Mike Sommers told reporters Tuesday that other U.S. LNG projects that are ramping up, such as Calcasieu Pass in Louisiana, could assist Europe.

Maintenance that has ended at gas terminals in the UK, Germany and France could also provide a boost.

Even still, the market is likely to get tighter as winter nears and Asian activity accelerates.

Asian LNG futures for winter delivery jumped above $30 – the highest in about two months – as word of the NS1 and Freeport outages spread on Tuesday. That would keep the spread with TTF in Europe tight, setting the stage for fierce competition between the two regions this winter.

One trader in Asia told NGI that cargoes from Freeport would be difficult to replace, particularly as buyers there start to secure them ahead of winter. The facility has long-term contracts with buyers in Japan and South Korea. Another trader in the region told NGI that buyers were scrambling to stay ahead of the outages to secure shipments for later in the year.

In the United States, Henry Hub rebounded Wednesday as traders weighed the impact of the Freeport outage against hotter weather and higher gas-fired power burns. The incident is generally expected to have a bearish impact on U.S. prices, given that more gas is likely to end up in storage ahead of winter.

However, Goldman analysts said “the tightening risk to balances coming from weather for the remainder of summer” have increased compared to the spring, which could keep trading volatile.

Although an extended outage is expected for the Freeport terminal, the odds of summer natural gas prices in the United States surpassing the $10 mark have “materially lessened,” analysts at Tudor, Pickering, Holt & Co. (TPH) said. The firm did note that the “risk-reward for the summer months is clearly changed,” saying a continuation of recent hot weather trends could see prices retrace some of the recent moves higher as the summer continues.

The “Freeport closure will whittle away at those big deficits, but will not eliminate them,” said Mizuho Securities USA’s Robert Yawger, director of energy futures.

Balances could also be impacted by the Atlantic hurricane season, which runs through November, if it curbs production and additional export demand.

The Freeport outage has renewed calls to limit U.S. exports, as well. The Industrial Energy Consumers of America (IECA) said the steep drop in prices Tuesday after the terminal said it would offline longer “demonstrates the clear connection” between exports and the “inflationary impacts” to domestic prices for natural gas and electricity.

“It should be alarming to federal policymakers that the Freeport LNG terminal only exports 2 Bcf/d, yet it is having such a significant impact” on prices, said IECA CEO Paul Cicio.

Andrew Baker contributed to this story