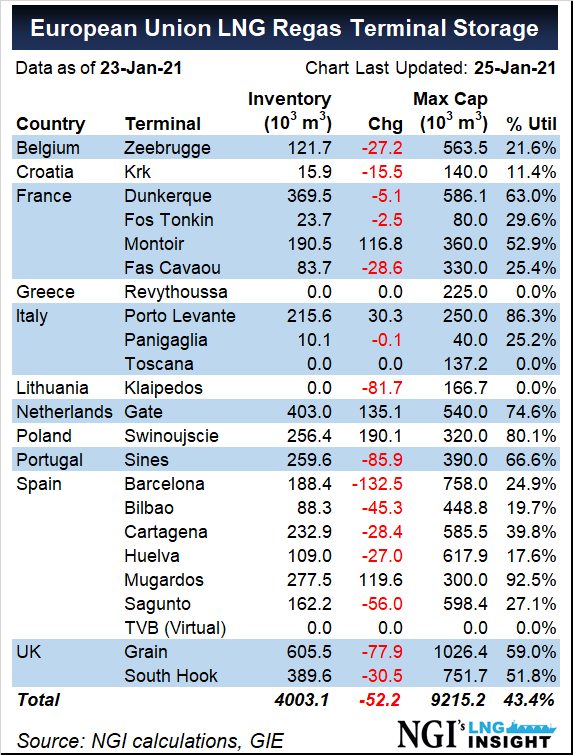 The Japan Korea Marker spot price fell below $9.00 to finish at $8.90/MMBtu after it shot above $30 to reach an all-time high earlier this month. Meanwhile, prompt European natural gas prices were steady, moving sideways throughout most of the week until Friday when they made strong gains on colder temperatures and lower wind power generation. The outlook was seen weakening Monday.

“The panic hitting liquefied natural gas (LNG) markets seems to be alleviating with improving supply availability and the restart of competing fuels for power generation,” data intelligence firm Kpler said in a note to clients on Friday. “This additional supply is weakening price sentiment for March delivery.”

Operational issues at LNG facilities in the Pacific Basin such as Ichthys and the Prelude floating LNG terminal have been resolved, while traders now have more time to meet demand in the coming months as the supply crunch has eased.

But historic cold in Asia and Europe has loosened its grip, with forecasts in large parts of both regions trending warmer over the next week or so. Both the National Balancing Point and the Title Transfer Facility (TTF) closed lower on Monday.

Despite lower prices, the spread between JKM and TTF, which stood at about $1.50/MMBtu on Friday, remains attractive enough to divert cargoes from Europe toward Asia. As more vessels head to the Pacific, Bloomberg ship-tracking data shows that those on the water for more than 20 days have surged to about 40.

“Record-breaking LNG cargo prices have retreated from their peak, yet vessel availability remains tight through February, and those with availability are holding firm against offering a discount,” said shipbroker Fearnleys AS.

Rates to charter vessels do remain high, but they’ve dropped from extraordinary levels seen earlier this month. Vessel rates in the Atlantic Basin have slid 12% from the previous assessment to $223,500/day, according to Spark Commodities. In the Pacific Basin, they’ve declined to $158,500/day, down 19% from the previous assessment as more ships are available and market activity has cooled.

But as more ships have been pulled away from the Atlantic, LNG imports in Europe have continued to fall off, necessitating stronger pulls from underground natural gas storage, which stood just below the five-year average at 56.8% of capacity on Saturday. Above ground LNG storage at import terminals is also draining fast and was at 43.4% the same day, compared to levels of about 50% in recent months.

The uptick in market activity since November has prompted analysts at Morgan Stanley to increase their 2021 European natural gas price forecast by 35% to $5.80, mainly on stronger forecasted demand and lower LNG imports. The bank also increased its JKM spot forecast to $7.50 this year from an earlier projection of $4.50.

“This removes a risk that has been a key overhang of global LNG prices in each of the past two years,” the bank said. “As a result, we now expect U.S. export arbitrages to remain open during the upcoming summer, reducing the risk of cargo cancellations and supporting higher prices.”

In the United States, prompt Henry Hub prices gave up about 28 cents between Jan. 18-22  on a warmer weather outlook. Feed gas deliveries to U.S. export terminals on Monday bounced back to above 11 Bcf from lows late last week, when fog along the Gulf Coast disrupted loadings. Spreads to both Europe and Asia for March delivery remain healthy at well over $4.00 each.

In other news, renewables generated 38% of Europe’s electricity last year, surpassing fossil fuels for the first time, according to a report from research organizations Ember and Agora Energiewende. Fossil fuels accounted for 37% of the continent’s power stack. Coal generation fell by 20% last year. Natural gas generation fell by just 4%, due primarily to strong carbon pricing that made the fuel the cheapest for electricity among fossil fuels, according to the report.

Elsewhere, the Russian pipelaying vessel Fortuna has reportedly started work offshore Denmark to finish the last stretch of the Nord Stream 2 pipeline. Work has started despite new sanctions on the ship. The pipeline would move 5.3 Bcf/d of natural gas from Russia to Germany. Just 100 miles of the system are left to construct, but opposition from the United States has slowed work.

The European Parliament also passed a resolution last week for work to stop on the pipeline after Russian opposition leader Alexei Navalny was arrested, further throwing the future of the project into doubt.