Warmer weather in Europe and Asia weakened competition for liquefied natural gas (LNG) cargoes and pushed prices lower as the week got underway. 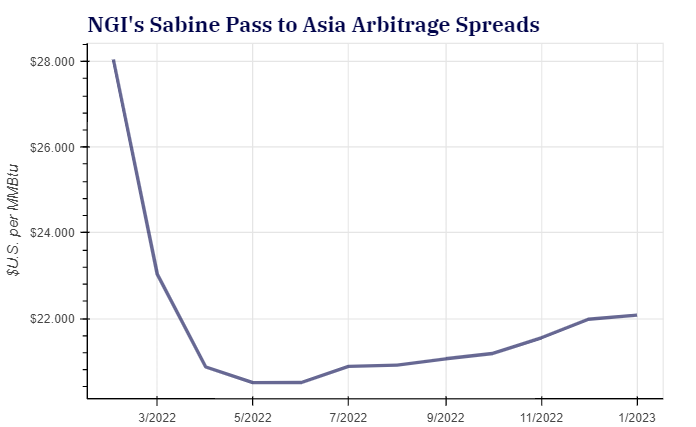 The Title Transfer Facility (TTF) climbed higher for most of last week, reversing declines that came with the end of December. The contract lost steam and closed lower Friday. The Japan-Korea Marker (JKM) followed a similar trajectory and is again fetching a premium over the European benchmark after the spread inverted last month amid skyrocketing prices across the continent.

The losses continued on Monday, when warmer weather and a windier outlook weighed on natural gas demand and buoyed renewables in Europe. Mild weather is expected throughout the month in Northern and Western Europe, while temperatures in Asia are forecast at or above normal in the coming weeks.

JKM spot prices fell sharply Monday as competition for cargoes eased with Europe. The last of a wave of vessels is headed for the continent to take advantage of the recent spike in prices. JKM is currently trading above TTF, which could attract more LNG at a time when fundamentals remain unchanged in Europe, where the market is still short of natural gas.

“Despite weak withdrawals, gas stocks remain too weak to allow Europe to do without LNG,” analysts at Engie EnergyScan said in a note to clients Monday. “With European prices now well below Asian prices, we believe their downside potential is limited. A rebound is therefore likely this week.”

European storage inventories were filled to 55% of capacity Monday, compared to the five-year average of 68%. Norwegian flows were also lower due to planned maintenance at the Skarv gas field, while Russian pipeline flows at the Mallnow compressor station in Germany were still at zero as they have been since Dec. 21. Russian deliveries at the Velke Kapusany compressor station on the Ukraine/Slovakia border are flat with last week, as well.

The Dutch government said last week that it could increase production from the massive Groningen field to help meet German demand. The field is planned to be closed later this year because it’s been linked to earthquakes. The government said a decision on more production is expected before April, which has also weighed on prices.

“Temperatures are expected to trend at or above normal in the coming weeks, and barring any unexpected shift, Asian buyers should be able to sail past peak winter without a repeat of last year’s fiasco,” said Rystad Energy analyst Wei Xiong.

Asian natural gas inventories are trending higher this winter as buyers worked ahead of the season to avoid the shortages they grappled with at this time last year. Royal Dutch Shell plc’s 3.6 million metric tons/year Prelude floating LNG terminal is expected to remain offline in the coming weeks after a power outage knocked the facility offline last month. Bloomberg reported that the outage could last until at least late February. Rystad added that the outage could spur some spot buying from Prelude’s offtakers.

In the United States, meanwhile, Henry Hub prices climbed higher Monday, finishing above $4/MMBtu for the first time since the beginning of the year. A colder forecast is supporting prices.

Feed gas deliveries continue to remain strong and in line with last month’s levels at about 12 Bcf/d. Given the bounce in JKM prices, it is now more profitable to send U.S. LNG to Asia, where cargoes were earning about $4 more than in Europe on Friday, according to NGI data.

In other news last week, German energy company Uniper SE said it borrowed roughly $11 billion to pay for margin calls amid the recent surge in natural gas and power prices. This year’s volatility has forced energy suppliers in Europe to close their doors and increasingly forced companies to post the large sums required by exchanges as collateral for trades.