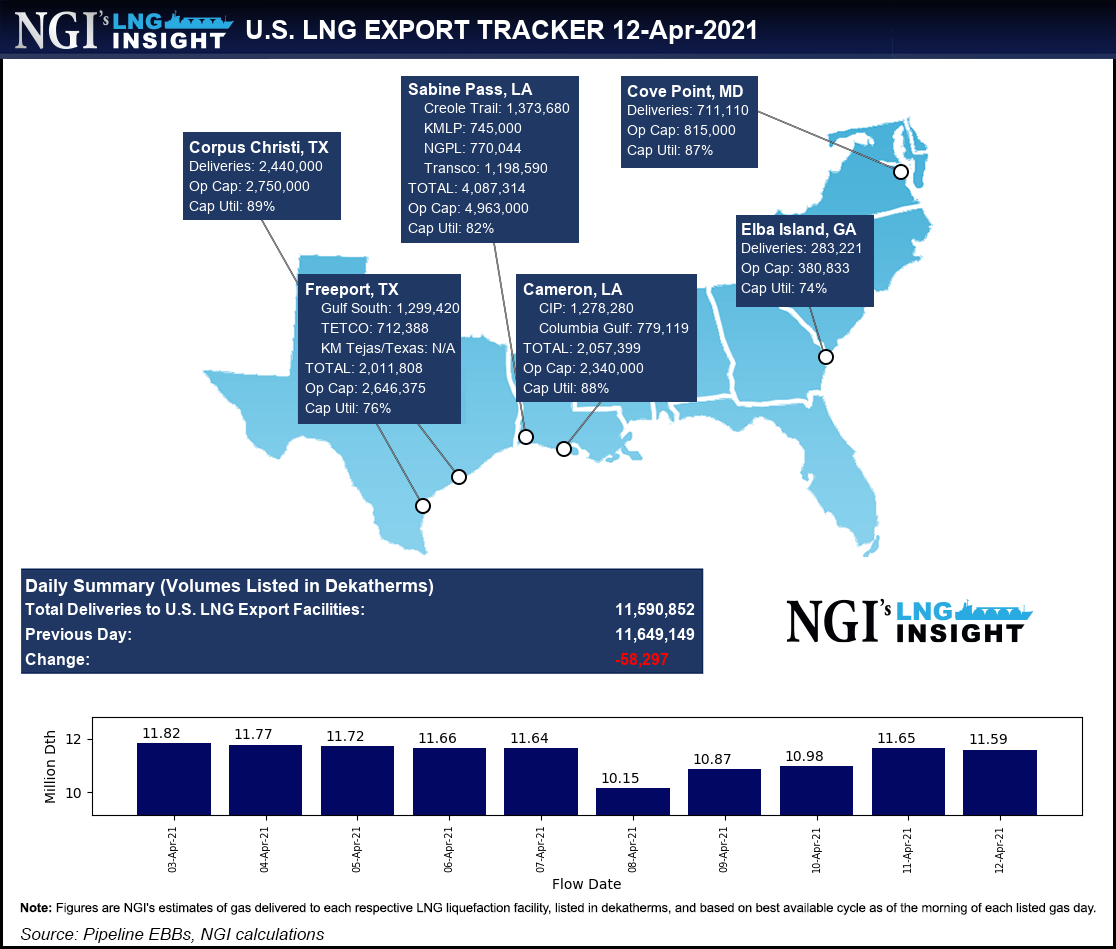 Both near-curve Title Transfer Facility and National Balancing Point contracts in Europe closed higher Monday. Temperatures across the continent are expected to trend cooler over the next one- to five-day period, with lower temperatures forecast to persist into the six- to 10-day time frame, according to Maxar’s Weather Desk. Lower wind output and a drop in Russian pipeline imports caused by an unplanned outage that’s not expected to be resolved until mid-week are also pushing natural gas prices higher.

Japan-Korea Marker futures and spot prices also remain strong around $7/MMBtu as restocking continues across the region following a brutally cold winter that left inventories depleted. Some of the region’s major buyers are also reportedly getting a jump on securing cargoes for next winter after they were caught short amid a historic cold snap last season. Bloomberg reported last week that China Petroleum and Chemical Corp., aka Sinopec, has already purchased 35 cargoes for delivery between June and February.

Global gas demand has lifted U.S. LNG exports, which hit a record high in March. Over the next 12 months, U.S. exports should average about 8.96 Bcf/d, up from 6.38 Bcf/d over the previous 12-month period, according to Bloomberg and NGI calculations.

NGI data also show that spreads for delivering LNG between the United States and Asia remain near or above $4/MMBtu for the remainder of the year for those with vessels chartered, while spreads between the country and Europe are also in the money at well above $3.00 over the same time.

Feed gas deliveries to U.S. terminals bounced back Monday, with deliveries scheduled at over 11 Bcf/d, following a drop in volumes heading into the weekend that was caused by maintenance at Cheniere Energy Inc.’s Corpus Christi terminal in South Texas. U.S. natural gas prices also closed higher on Monday, with a colder weather outlook lifting the May Henry Hub contract by about four cents to $2.561.

Elsewhere, PAO Novatek said last week that it intends to offer its 60% stake in the Arctic LNG 2 project in Russia as collateral for long-term financing of the $21 billion project. Novatek is aiming to raise $11 billion of outside financing this year. The project, which has several other partners across the world, includes the construction of three LNG trains with a capacity of 6.6 million metric tons/year (mmty) of LNG each.

In the United Kingdom last week, Equinor ASA announced that it has partnered with an affiliate of energy company SSE plc to build two power plants in the Humber Region that would utilize carbon capture and storage and hydrogen to replace older fossil fuel-burning facilities on the grid.

Plans call for developing a 900 MW natural gas-fired power plant in the Humber, the UK’s largest and most carbon-intensive industrial area. The gas-fired plant would utilize carbon capture technology to remove emissions. The carbon would then be transported and stored under the Southern North Sea. A 1,800 MW hydrogen-fueled power plant is also in the works.

Hydrogen continues to gain traction across the world. In India last week, Chart Industries Inc. and Reliance Industries Ltd. announced the formation of hydrogen coalition India H2 Alliance to work with the government to advance the use of hydrogen across the country’s economy.