Moving the energy economy to net zero emissions is timely and costly, and the world now faces another dilemma: a natural gas market under “tremendous pressure” ahead of winter, the International Energy Agency (IEA) said Wednesday. 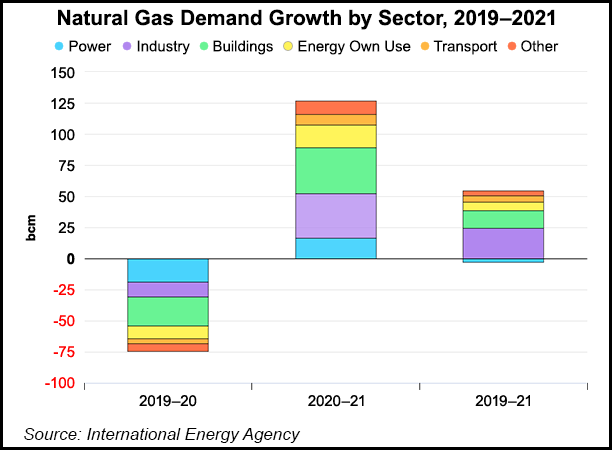 In launching its annual World Energy Outlook (WEO-2021), the global energy watchdog acknowledged that winter 2021/2022 is opening with “record high seasonal gas prices, as the combination of a strong recovery in demand, extreme weather events and unplanned supply outages have led to tighter markets.

“Such tensions are a reminder that security of supply remains a major topic for gas markets, only a year after a record drop in demand and oversupplied markets.”

There are questions concerning “not only electricity demand and industrial production, but also the price evolution of gas versus coal in key markets such as the United States, as well as in regard to the weather across the Northern Hemisphere toward the end of 2021.”

“This recovery in gas demand has been driven mainly by fast-growing markets — primarily in Asia and, to a lesser extent, the Middle East — and subject to uncertainties regarding industrial rebound or fuel price competitiveness,” researchers said.

European Union gas consumption is forecast to rebound to levels on par with 2019.

For the United States, however, gas demand growth should be more gradual, with consumption in 2021 unlikely returning to the pre-pandemic levels of 2019.

Global gas consumption declined year/year in 2020 by 75 billion cubic meters (Bcm), or 1.9%, according to researchers. The decline represented “the largest recorded drop in gas demand in absolute terms, but it would be on a par with 2009 in relative terms.”

“This relative resilience can be partly explained by fuel switching in electricity generation,” according to IEA. “The switch was particularly remarkable in the United States, where gas demand for electricity generation increased by around 2% year/year in spite of a declining electricity demand, while in Europe, gas-fired generation benefited from low prices and a sharp recovery in carbon prices in the second half of 2020.”

As prices have risen, gas is being “challenged” in the electricity generation mix, IEA’s team noted. U.S. consumption in the first three months was lower than in 1Q2020.

“Across the year, higher gas prices are expected to keep gas demand in the United States close to 2020 levels and around 2% below 2019 levels,” researchers said.

Gas consumption this year is forecast to be led by the industry and buildings sectors, each up around 5% year/year, according to IEA.

In the buildings sector, the growth in gas consumption for the year is traced to the colder temperatures in the first three months.

However, gas use for electricity generation “is expected to grow just 1%” because of “low electricity demand growth, increasing renewable capacity and tougher price competition from coal.”

Is The Energy Transition Slowing Down?

Moving the world to zero carbon emissions by 2050 is slow going, IEA acknowledged. The sputtering progress highlights the need for an “unmistakable signal of ambition and action from governments.”

The WEO “shows that while climate ambitions have never been higher, energy transitions have a long way to go,” said Executive Director Fatih Birol. Governments meeting in November in Scotland to discuss climate change “must give the signal…that they will drive a wave of investment” toward a net-zero emissions future.

The United Nations (UN) Climate Change Conference of the Parties, aka COP26, is scheduled next month in Glasgow. The summit is bringing together countries that signed the UN Framework Convention on Climate Change, a treaty that came into force in 1994. The WEO “is designed as a handbook” for COP26, Birol noted.