The global natural gas market is grappling with demand loss in China that’s resulted from the coronavirus outbreak, as spot prices in Northeast Asia have continued to tumble, more ships are idling, and buyers and sellers are trying to find a place for deferred cargoes. 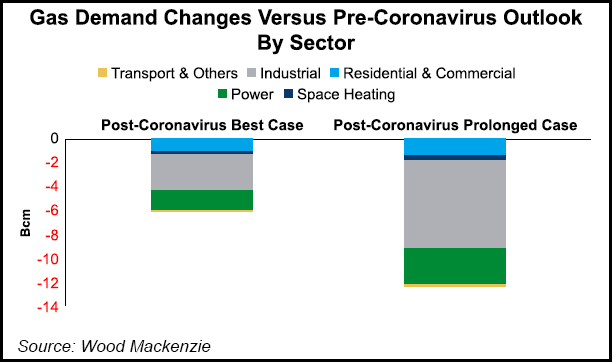 Total SA, Royal Dutch Shell plc and Qatargas have all rejected force majeure notices from China National Offshore Oil Corp. (CNOOC) since last week asserting that the state-owned company doesn’t have cause to refuse delivery of liquefied natural gas (LNG). PetroChina has also received force majeures from its customers and has warned that it could do the same unless downstream demand rebounds.

The situation has prompted further negotiations. CNOOC did receive the cargo from Total it had tried to prevent with force majeure, according to energy and ship brokerage Poten & Partners.

“Sources say that the two parties have come to an understanding under which CNOOC took the cargo in return for Total deferring other cargoes,” the firm said Thursday. “Total has found other buyers in its portfolio to take at least some of these cargoes.”

The virus has wedged its way into an evolving global gas market that has been transformed by new players, increasing volumes and flexible U.S. supply contracts that have helped liquidity and prompted more spot trading. Falling demand in one of the world’s largest buying regions has compounded a global supply glut and come at a time when prices are also at record lows in the United States and Europe.

The LNG spot price in Northeast Asia fell below $3.00/MMBtu last week and has continued to spiral downward, shedding 25 cents over the last week to about $2.70 on Friday.

Poten said Qatargas has agreed to a deferment schedule and terms with CNOOC, as well, while China Petroleum & Chemical Corp., aka Sinopec, has reportedly agreed with ExxonMobil Corp. to do the same under Papua New Guinea LNG contracts. The firm added that major trading houses have stepped up to take spot volumes, while countries such as India are buying cargoes opportunistically at steep discounts of around $2.50/MMBtu.

The market is essentially in uncharted territory, especially if the glut persists and prices remain subdued. The outbreak now finds sellers trying to find a home for missed shipments and how best to price them, Poten noted.

There were 15 floating cargoes throughout Asia on Friday, according to ClipperData. That’s up from nine floating cargoes earlier in the week, an indication of China’s ability to absorb supplies. ClipperData’s ship tracking on Friday also showed that three vessels were diverted in Asia.

According to Poten, China is expected to take 49 cargoes between February and April, or 3.3 million metric tons less than the brokerage previously forecast. Data intelligence firm Kpler said earlier this week that Chinese LNG imports have dropped by 23% year/year since January 22, when Wuhan, the epicenter of the outbreak, was quarantined.

Longer-term, Wood Mackenzie estimated this week that China’s gas demand could be cut by anywhere from 6 billion cubic meters (Bcm) (211 Bcf) to 14 Bcm (494 Bcf) this year depending on the length of time required to contain the virus. Travel and economic restrictions have already cut into natural gas consumption in the country, particularly industrial demand, the firm said.

While few cargoes have left the U.S. for China since last year due to an ongoing trade dispute, the outbreak is putting even more pressure on already low prices. Stockpiles in Europe are already brimming and if more cargoes head there amid the outbreak it could further undermine the continent’s ability to inject gas and take in more LNG over the summer.

European forward prices have “left lifters of U.S. cargoes facing the possibility that they will not recover variable costs for much of summer 2020,” Poten said.