Global natural gas prices remain high, but they were largely stable Monday and Tuesday after an extraordinary stretch of chaotic trading last week. 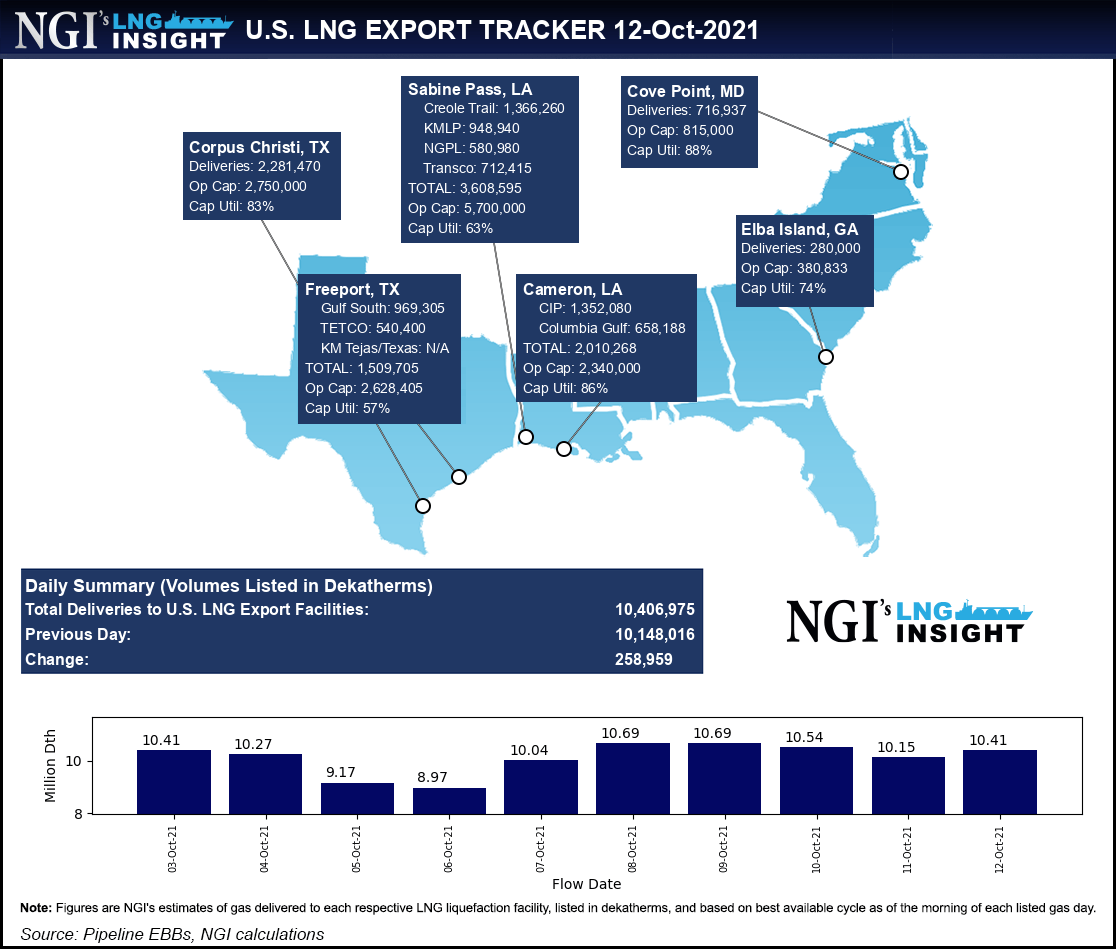 “The truth is that TTF prices have disconnected from their traditional fundamental based anchors or at least the visibility on key balancing support and resistance levels is a lot less clear than it used to be,” said Energy Aspects’ James Waddell, head of European natural gas. “Prices can and have skyrocketed because we’re dealing with an issue of trying to balance through fuel switching with a limited amount of liquids-fired capacity in Europe and trying to discourage industrial consumption of gas in Europe.

“The economics of that is much less clear than when it was simply a case of gas/coal competition in the power sector and financial traders are willing to take sizable bets on TTF volatility at the moment,” he told NGI’s LNG Insight.

European prices hit records of roughly $40/MMBtu last week and hit intraday highs of $55 before falling through the end of the week. The drop was driven largely by a margin call that led large trading houses to reduce their risk profiles and after Russian President Vladimir Putin’s remarks that the country could stabilize energy supplies by sending more natural gas to Europe, according to EBW Analytics Group.

High prices and cuts in industrial consumption appear to be destroying demand on the continent, according to Tudor, Pickering, Holt & Co. (TPH). The firm said October demand is up by only 2 Bcf/d at 29 Bcf/d overall, behind its forecast 38 Bcf/d of demand.

Flows into storage have also been ticking up in recent sessions. European inventories stood at 77% on Tuesday, up from 76% over the weekend. Still, time is running out for injections as colder weather approaches.

TPH analysts are forecasting demand of more than 65 Bcf/d through December and January, noting that “modest demand destruction is likely to little materially impact balances this winter — particularly if it’s cold.”

Asian demand is also strong. Japan-Korea Marker spot prices hit a record of $56.326 last week before plunging on market volatility by $20.722 the next day. Spot prices have since been stable and were assessed near $33 Tuesday.

China this month ordered state-owned companies to secure energy supplies this winter to avoid the power shortages the nation has so far grappled with this year. Flooding in Shanxi, a top coal-producing province, has made coal shortages worse and left the country hungrier for energy supplies.

“Asia’s energy importers are hurting more than most,” said Wood Mackenzie’s Gavin Thompson, Asia-Pacific vice chairman. “Today, traded coal prices into Northeast Asia are soaring as stockpiles dwindle and supply tightens, and this is even before the mercury starts to fall.

India is also facing coal shortages as its economy rebounds from Covid-19. “From India to South Korea, the spectre of electricity blackouts looms as buyers scramble to secure supplies ahead of peak winter demand,” Thompson said.

Chinese companies have already stepped up their longer-term gas buying. BP plc and utility Shenzhen Gas recently signed a 10-year deal for up to 300,000 metric tons/year of LNG. That deal came as another Chinese utility, ENN Natural Gas Co. Ltd., agreed to purchase 900,000 metric tons for a 13-year term from Cheniere Energy Inc.

Global LNG supplies also continue to be squeezed. Vessels have been waiting to load at the Bintulu terminal in Malaysia for more than a week. There could be broader issues causing the delays. Sakhalin Energy in Russia also reportedly canceled plans for a sales tender because of issues at its LNG plant.

In other developments, Qatar Petroleum, one of the world’s largest LNG exporters, has changed its name to Qatar Energy. The move is similar to ones made by other large oil and gas companies across the world as the energy transition accelerates.

Elsewhere in the world, a group of companies including Chevron Corp. and ExxonMobil formed the Asia Natural Gas and Energy Association. The trade group plans to advise governments on energy policies as they try to meet tighter environmental standards.