A fire at the Freeport liquefied natural gas (LNG) export terminal in Texas on Wednesday shut down the facility for at least three weeks and had immediate impacts on natural gas pricing across the globe. 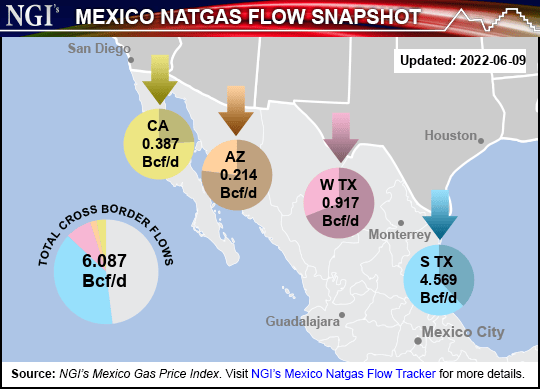 With New York Mercantile Exchange July natural gas futures early in the week making their way to $10.00/MMBtu, the incident sent prices tumbling to near $8.00.

Freeport was using about 2 Bcf/d of natural gas. It also pulls about 690 MW from the power grid. That gas could now go to U.S. customers, storage or be sent via pipeline to Mexico.

Europe’s Title Transfer Facility (TTF) benchmark, meanwhile, gained nearly $1.50 to finish above $26/MMBtu Thursday. As the international market tightens, though, Mexico is in a privileged position, according to NGI’s Patrick Rau, director of strategy and research.

“Most gas bought and sold in Mexico is tied to U.S. indexes, particularly in Texas and Louisiana, and that is providing some price relief to Mexico right away,” said Rau. He added that “it would not surprise us to see the outages extend into July, and for every day Freeport remains down, that’s another 2 Bcf of gas that could ultimately serve Mexico.”

On Thursday, Mexico imported 6.09 Bcf of natural gas via pipeline from the United States, a high for the year. The 10-day average was 5.71 Bcf/d, according to NGI calculations.

As for concrete pricing impacts, Tudor, Pickering, Holt & Co. (TPH) analysts said the amount of time Freeport remained offline would determine whether the immediate sell-off was “overdone or undercooked.” Freeport is one of the three largest LNG export terminals in the United States.

Mexico natural gas demand has remained resilient even with prices at $9, according to traders who spoke earlier this month at the Mexico Gas Summit in San Antonio, TX. Another test was weathered last week when Hurricane Agatha made landfall in Oaxaca, one of 14-19 storms expected during this year’s Atlantic hurricane season.

Wood Mackenzie analyst Ricardo Falcón told NGI’s Mexico GPI that in 2021, “even when some hurricanes hit large demand centers, declines in gas consumption were either short-lived or negligible.”

However, heavier rainfalls could lead to a drop in power burns, he said. “In July-August 2021, for example, above-normal precipitation contributed to the average 5% monthly drops that Mexico registered in gas burns for power generation. As in 2021, this year’s hurricane season seems to be bringing noticeable downside risk on Mexican demand for natural gas.”

Mexico’s Sistrangas five-day line pack average fell this week, hitting 6.661 Bcf on Wednesday (June 8). The line pack is below the optimal range of 6.86-7.29 Bcf needed to guarantee sufficient pressure in the system. Line pack has been a persistent problem all year on the Sistrangas.

Demand on the Sistrangas on Wednesday was 4.585 Bcf, up from 4.551 Bcf a day earlier. Mexico gas production fed into the system was 1.291 Bcf. Southeast production dominated the total, with 718 MMcf from the region injected into the pipeline system.

In Mexico, NGI natural gas cash prices rose, despite the Freeport incident, on the back of a heatwave in Texas. On Wednesday, Los Ramones rose 19.9 cents day/day to $9.860. Monterrey via the Mier-Monterrey system rose by 19.5 cents to $9.687.

On Thursday, the U.S. Energy Information Administration (EIA) reported an injection of 97 Bcf into natural gas storage for the week ended June 3. The print was in line with the expectations of analysts.

The South Central region saw an increase of 26 Bcf. This included a 24 Bcf injection into nonsalt facilities, according to EIA. Until Mexico develops storage capability, this is the storage system most readily available to the country.

NGI’s Rau said that some of the gas destined for Freeport could end up in South Central storage, and “any increase in the pace of injections should be welcomed by buyers in Mexico.”