A “pronounced shift” to renewables, combined with a shift to electricity and hydrogen, led BP plc to reduce its annual forecast for global natural gas as a primary energy source. 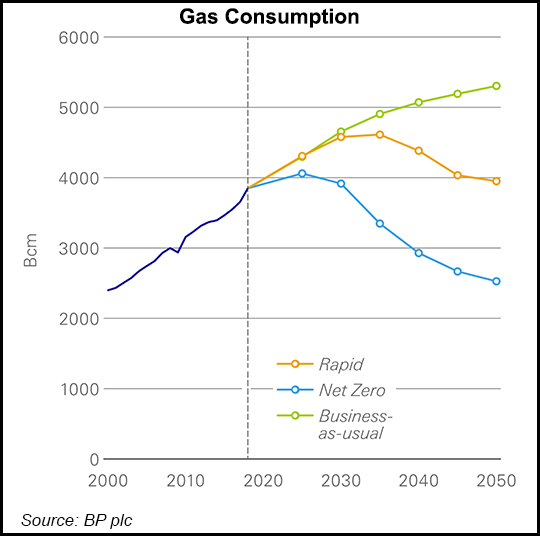 The annual Energy Outlook was introduced on Monday by chief economist Spencer Dale during a webcast. The economics team led by Spencer Dale used Rapid, Net Zero and Business-As-Usual (BAU) scenarios — to outline the possibilities and the challenges for global energy to 2050.

A “fundamental restructuring” is underway, Dale said, as the world moves from fossil fuels to net-zero emissions. CEO Bernard Looney was one of several executives who discussed the outlook during the webinar.

BP launched its “new purpose” in February, “to reimagine energy for people and our ‎planet,” Looney said. “This purpose was supported by a new ambition, to be a net-zero company by 2050 or sooner ‎and to help get the world to Net Zero.

“Our new purpose and ambition are underpinned by four fundamental judgments about the future. ‎That the world is on an unsustainable path and its carbon budget is running out. That energy markets ‎will undergo lasting change, shifting toward renewable and other forms of zero- or low-carbon ‎energy. That demand for oil and gas will be increasingly challenged. And that, alongside many others, ‎BP can contribute to the energy transition that the world wants and needs, and create value doing ‎so.‎”

Management detailed the strategy last month to evolve from an “international oil company” to an “integrated energy company,” Looney said. “And while the Covid-19 ‎pandemic has had a huge impact on the global economy and energy markets, it has not affected our ‎belief in and commitment to our purpose, ambition and strategy.”

BP expects renewable energy to play an increasingly vital role, with customers redefining “mobility and convenience, underpinned by the mobility revolution that is already underway combining electric vehicles, shared mobility and autonomy,” the CEO said.
Oil and natural gas will be “needed for decades,” but they “will be increasingly challenged as society ‎shifts away from its reliance on fossil fuels.‎”

BP’s outlook for natural gas is more durable than for coal or oil, “helped by broad-based demand and the ‎increasing availability of global supplies.”

In the Rapid scenario, global demand for gas, including biomethane, “recovers from the near-term ‎dip associated with Covid-19 and grows relatively robustly over the next 15 years or so,” economists said. Growth over the next 15 years is seen driven ‎primarily by developing economies in Asia as they switch from ‎coal toward lower carbon fuels.

However, in the Rapid forecast, global consumption is expected to decline in the subsequent 15 years “as the ‎impetus from developing Asia fades, compounded by increasing falls in the developed world…”

Demand by the end of the Outlook period in the Rapid forecast to 2050 shows gas consumption  declining “close to its 2018 levels” to around 4,000 Billion cubic meters (Bcm).

The BAU scenario shows gas demand climbing across the next three decades, up by about one-third to 5,300 Bcm by 2050. Gas consumption in that forecast is relatively widespread, with ‎”particularly strong increases across developing Asia, Africa and the Middle East.”

“The main areas of increasing gas production in Rapid are China and Africa, supported by rising ‎domestic consumption,” according to BP. “U.S. and Middle Eastern gas production by 2050 are largely unchanged ‎from their 2018 levels, with marked falls in domestic demand offset by increased exports.

“Much ‎of the exports are in the form of liquefied natural gas (LNG), which roughly doubles over the ‎Outlook in Rapid, increasing the competitiveness and accessibility of natural gas around the ‎globe.”‎

The stronger LNG demand growth in the BAU scenario is met mostly by increases in U.S., Middle ‎East and Africa, “which together account for around two-thirds of the increase in global supplies,” BP said. ‎

In the Rapid forecast, the shift to lower carbon energy sources and energy ‎efficiency gains means gas used in the industrial and power sectors, the two main sources of growth ‎in demand for the past 20 years, is mostly unchanged.

“Instead, the main source of strength over the Outlook is the growing use ‎of natural gas to produce ‘blue hydrogen,’ which accounts for almost 10% of global gas demand ‎by 2050 in Rapid.”  Blue hydrogen is generated using energy sources that include natural gas and carbon capture sources.

“These shifts in the pattern of gas demand are even more pronounced in Net Zero, with the use of ‎gas in the power sector and buildings falling by around 65% and 90% respectively, partially offset ‎by a substantial increase in the use of gas to produce blue hydrogen,” economists said.

Meanwhile, the growth in demand in the BAU forecast is broad, led by the industrial and power sectors, which together account for around two-thirds ‎of the increase.

“Natural gas can potentially play two important roles in an accelerated transition to a low carbon ‎energy system,” according to BP.

Gas can support the shift from coal in developing economies, as renewables and other fuels ‎may not be able to grow quickly enough to replace coal, economists noted. In addition, gas can be combined with carbon capture, utilization and storage, or CCUS as a source of (near) zero-carbon power or to produce blue hydrogen.‎

LNG is forecast to expand sharply in both the Rapid and BAU scenarios, “leading to a more competitive, globally ‎integrated gas market.” Trade in the Rapid forecast “bounces back strongly from the near-term fall associated with Covid-19, ‎more than doubling over the first half of the Outlook, increasing from 425 Bcm in 2018 to around ‎‎1100 Bcm by the mid-2030s.‎”

The strong growth primarily is driven by developing economies in Asia. Supplies from the United States, Africa and Middle East “emerge as the three main hubs for LNG exports.‎”

“The pace of this decline in LNG exports after the mid-2030s is greater than the speed of ‎depreciation of liquefaction facilities, implying that toward the end of the Outlook some ‎facilities need to be operated at less than full capacity or shutdown prematurely,” economists noted.  ‎

LNG trade in the BAU forecast is seen growing more slowly, reaching a little more than 1,000 Bcm by 2050. ‎

“However, even in BAU, around 60% of that growth occurs over the next 10 years or so,” according to BP.

BP’s team found that under the BAU scenario, U.S. oil demand peaked in 2019. Under ‎the Net Zero forecast, “it drops over 80% by 2050.”‎ Efficiency also is seen playing a key role in U.S. decarbonization, with primary energy ‎declining 30% over the outlook under the Rapid forecast.

Meanwhile, the United States also is expected to become a major producer and consumer of hydrogen in the Rapid and Net Zero forecasts.

Compared with the 2019 Energy Outlook, the largest downward revision is to oil, whose “diminished role…reflects the proportionally higher ‎impact of Covid-19 on the transport sector, faster penetration of electricity and hydrogen in ‎transport, and more stringent policy assumptions regarding the use of plastics.”

Meanwhile, renewable energy as a share of primary energy in 2040 is 7% higher than in last year’s Outlook.