Liquefied natural gas (LNG) buyers could start rejecting U.S. cargoes next year as the global gas market is all but certainly to remain oversupplied even if this coming winter is colder than normal, a team of Poten & Partners analysts said Monday. 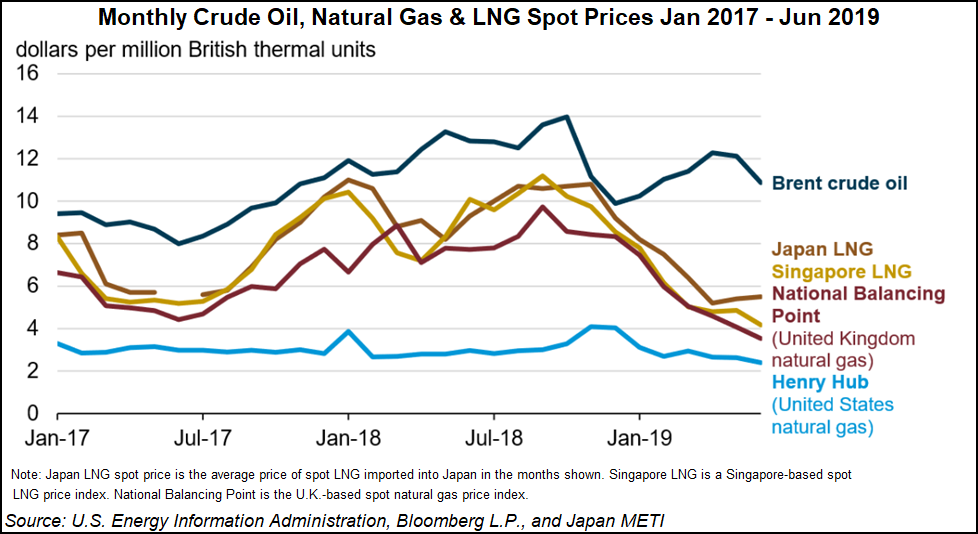 “This is a very different time for markets,” Feer said to a room of about 100 industry executives in Houston, many in town to attend Gastech 2019.

And markets are taking things into their own hands. Among other things, Freeport LNG and Redwood Markets Inc. plan to launch a virtual online storefront in November to sell cargos. Redwood Marketplace would enable buyers and sellers of physical LNG to negotiate and confirm commercial terms.

“The number of participants in the global LNG market place has increased substantially over the last decade,” Freeport LNG’s Hugh Urbantke, chief commercial officer said. “The Freeport LNG storefront will streamline interactions. It will also allow us to efficiently and transparently provide counterparties direct access to Freeport LNG’s spot cargoes…

“The U.S. shale gas revolution brought about massive changes for Freeport LNG and now, today, we see online commodity trading platforms exclusively tailored for LNG as another disruptive technology that needs to be adopted early on.”

With U.S. export capacity approaching 7 Bcf/d by the end of the year, and growth from traditional suppliers like Qatar, global gas prices have sunk to historically low levels as the market sits awash in supplies. Most surplus LNG has found a home in Europe, although storage inventories there have rapidly risen to near capacity.

“Europe’s storage inventories typically peak in November, and storage is already about 93% full overall. Some facilities are already at 100%,” Feer said. “This almost never happens.”

With gas stocks sitting pretty, Poten expects LNG imports for September and October to remain flat with August levels. Meanwhile, the rest of the world will need to absorb roughly 4.1 million metric tons (mmt) of surplus LNG over the next two months to prevent a greater overhang.

Energy Aspects shared the view that European LNG imports could soften in the fourth quarter given the limited storage capacity left for injections, which will cut aggregate demand year/year. Furthermore, the UK Met Office predicts a high probability of mild weather in October-November, “which could curb heating demand year/year in the early winter months.”

Even a cold winter may not help, Feer said. “Even with a sustained period of extreme cold, we still don’t draw down storage enough to get to normal levels. This storage situation is hard to unwind.”

In addition to the physical limitations of nearly full storage facilities, the market has been sending confusing price signals that have incentivized European customers to continue taking cargoes even as prices have at times fallen below U.S. benchmark Henry Hub, according to Feer. The European price discount has occurred only in the prompt month, however, so the steep contango continues to drive LNG purchases.

Meanwhile, Russian gas flows continue unabated because the country doesn’t want to relinquish market share in Europe, especially as it knows that prices won’t rise even if it does cut supplies, according to Poten.

The firm continues to see demand growth in China and Asia-Pacific, but economic growth is slowing. Storage facilities there are also “quite full. This is really a global phenomenon,” Feer said.

Poten expects northeastern Asia LNG imports to be flat overall as growth in China falls to a 10% annual growth rate through 2021, down from 30-40% in 2018. Southeast and South Asia demand growth will be strongest, with a high case scenario adding 50-60 mmt into Asia if China is “very aggressive” in pushing out coal. However, the country is stepping back a bit from the hardline approach it implemented in 2018.

Meanwhile, India, once believed to emerge as a major demand source, has so far failed to keep pace with expectations as infrastructure buildout lags. However, there have been some positive developments. Indian buyers have so far sought 13 cargoes through tender for October delivery, which would be well above spot demand in October 2018 and the highest for any month so far in 2019, according to Energy Aspects. Pakistan LNG was expected to close a 10-cargo tender in early September, the highest number of monthly cargoes it has sought this year.

Despite the supply overhang, the United States is leading a second wave of LNG export projects, to be mostly along the Gulf Coast, and global capacity additions by Qatar and other traditional suppliers total 124 mmt/year (mmty) based on projects already approved and those expected to be sanctioned through 2020. More than half of the capacity, 60 mmty, is being built by majors and national oil companies that are moving forward with their projects without long-term supply agreements, Feer said.

“Even without greenfield FIDs, the pipeline for projects is robust,” Feer said.

On the U.S. front, Cheniere Energy Inc. pulled the trigger on a sixth train at its Sabine Pass terminal, while Venture Global Ltd. sanctioned its greenfield Calcasieu Pass facility. Tellurian Inc. is expected to reach a final investment decision (FID) on its Driftwood LNG project by the end of the year, and NextDecade Corp. could sanction its Rio Grande facility during that same time frame.

However, buyers aren’t in a big rush to sign contracts, because there is a lot of LNG in the market. Tellurian was expected to announce a positive FID in June, and NextDecade’s most recent September timeline was pushed back to the end of the year.

As if securing contracts wasn’t enough of a hurdle, Venture Global has effectively set the market price for U.S. LNG with deals that fetch only $2/MMBtu. That’s at least 10% cheaper than supplies being offered by competitors like Cheniere.

“Now, other suppliers are being asked for $2 gas. There aren’t a lot of U.S. companies that are able to match that,” Feer said.

The first U.S. LNG exports hit international waters in 2016 when Cheniere delivered the first cargo from its Sabine Pass terminal. Three other Gulf Coast export terminals have started operations since then, while Dominion Energy’s Cove Point began exporting from the East Coast in March 2018. Kinder Morgan Inc. is set to start service at its Elba Island facility near Savannah, GA, any day now.

Abroad, number one LNG supplier Qatar Petroleum has announced its intent to expand production to around 110 mmty over the next five years from the current 77 mmty by building four new production units, two of which Poten expects to be in operation by 2029.

“New FIDs and slowing demand may lead to a future surplus,” Feer said. “Demand is hard to predict and getting harder.”

Ample supply and largely unimpressive demand growth stands to upend traditional purchasing terms for LNG in the years ahead, according to Poten.

Nearly 200 mmty of mostly long-term contracted capacity is set to expire through 2030, representing two-thirds of the global market. Poten expects as much as 70% of global LNG will be available for sale under more flexible terms by 2029.

“This will result in a fundamental reordering of the market structure,” Feer said. “We need indexation. We need transparency. Pricing in LNG is a real issue.”

Historically, much of the LNG sold in the global market has priced off oil, specifically Dated Brent and Japan Crude Cocktail. However, these legacy contracts aren’t market responsive.

“Brent hasn’t been Brent in about 20 years,” Feer said.

Brent, a benchmark assessment of the price of physical, light North Sea crude oil, is assessed using five different grades of crude oil, with the lowest price each day setting the price, according to Poten. However, North Sea production is falling, with output set to fall to less than one cargo/day, or 600,000 b/d, by 2022 or 2023.

There are efforts to save the crude benchmark, including the addition of costs, insurance and freight Rotterdam cargoes, and the potential inclusion of U.S. and West African crudes to the price discovery process, Poten said. However, while the other crude grades will increase liquidity, they also inject different fundamentals into North Sea pricing, including hurricane risks in the United States and political risks in West Africa.

“This could be very disruptive to global LNG markets,” Feer said. “Brent is favored now because traders and majors prefer it for ease of risk management, but it is facing a very uncertain future.”

“Today’s market is a kind of Frankenstein’s monster made from parts that weren’t designed to fit together,” Feer said. “The transition from the legacy business model to a more commoditized market is revealing issues that will have to be resolved over time.”