In its third annual Global Gas Security Review, the global energy watchdog analyzed recent security-related issues that have grown from increasing liquefied natural gas (LNG) trade. Markets worldwide are evolving from the major emerging LNG buyers, which are led by China, as well as rising U.S. production and export trade.

“This year’s report shows that concerns about energy security in the global gas market are as present as ever,” said IEA Executive Director Fatih Birol. “For example, the recent and unprecedented growth in natural gas demand from fast growing economies has also brought to light new supply issues, with supply shortfalls experienced in the People’s Republic of China last winter that resulted in higher prices for most other gas importers.

“Furthermore, while we can see real improvement in LNG flexibility, which keeps on growing and contributes to easing supply shortages, uncertainties remain for the future evolution of gas markets. This brings a risk of tightening from insufficient investment in production and infrastructure capacity. It also highlights the uncertainty surrounding future shipping capacity growth, a precondition to maintaining LNG market flexibility.”

Without enough investment, price volatility would hurt consumers and the “most price-sensitive emerging buyers,” which in turn would cause additional security concerns, Birol said.

In terms of flexibility, priorities differ for long-term traditional buyers that seek to remove destination clauses, and new emerging buyers whose goal is more focused on procuring short-term supply, according to researchers.

The development of secondary markets has also improved flexibility, as it emphasizes the role of portfolio players.

“In spite of the shift toward flexible LNG contracts with shorter duration and more destination
flexibility in new contracts, a substantial number of fixed destination legacy contracts still remain,” according to IEA.

Researchers estimated that existing flexible contracts (in force and future) will account for more than 50% of contracted volume beyond 2021, “but the uncertainty remains on currently uncontracted volumes, which more than double over the next five years.”

Gas-to-gas indexation has become more common in new contracts, mostly because of the development of the U.S. LNG market, the researchers said.

“Oil indexation remains, however, the major component of price determination for export volumes, and even more for import volumes — especially in the Asia and Pacific region.”
A tighter crude oil market, along with seasonal tensions on LNG supply, could put additional pressure on gas export prices.

“The lasting influence of oil indexation continues to impact the development of a flexible and liquid global LNG market,” the researchers said. 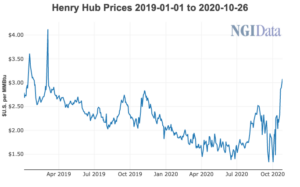 More than 45% of expected natural gas production in 2021 is hedged at a Henry Hub base price of $2.58/MMBtu, marginally lower than the 2020 price of $2.70, according to a Rystad Energy analysis of U.S. producers. The analysis also determined exploration and production (E&P) companies have to date hedged 41% of forecast 2021 oil…