The liquefied natural gas (LNG) market worldwide has begun to rebalance, albeit modestly, as concerns about oversupply ease, according to Wood Mackenzie. 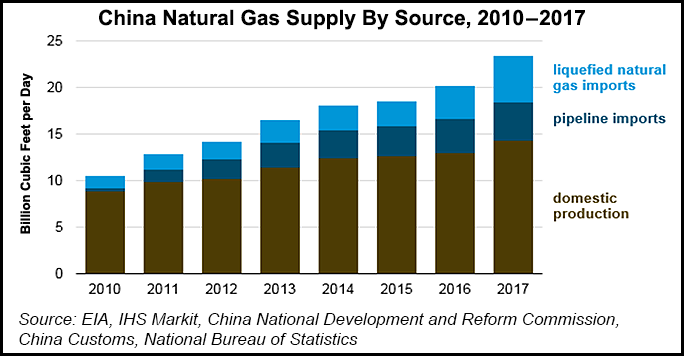 The global natural resources consultancy on Thursday issued its short-term trade and price outlook, which was overseen by lead author Massimo Di Odoardo, vice president of global gas and LNG.

“Record demand from China absorbed a large part of the additional 33 million metric tons (mmt) of LNG supply in 2017, but can it continue to support the market?” he asked. “We think yes through to winter 2018/2019, and while there will be a market shift in summer 2019, prices will remain relatively sustained.”

The Wood Mackenzie team sees supply growth easing a bit this year, adding 27 mmt before accelerating in 2019 to add 41 mmt in 2019.

Analysts have debated whether enough demand exists worldwide, and in particular in Europe to absorb all of the LNG expected on the market, Di Odoardo noted. Concerns also exist about whether Russia was better off competing for European market share, which could result in prices collapsing and U.S. LNG potentially not finding a home.

“However, as market conditions in Europe tighten and with the oil and coal forward curve remaining high, our analysis suggests Russia will maximize its revenues by accommodating all LNG imports in 2019,” he said.

Through this year, however, global markets for LNG should remain tight, the analysis indicated. Even if supply were to increase through next winter, “high seasonal LNG demand in Asia will result in yet another tight winter,” according to the report.

Prices in northern Asia are expected to again trade at oil parity, equivalent to $12/MMBtu.

However, as LNG supply ramps up and new projects are added, Wood Mackenzie’s team foresees about 40 mmt/year on an annualized basis of additional LNG supply available in summer 2019 versus summer 2018.

“The rebalancing of the global LNG market will result in more LNG having to be absorbed in Europe, with local spot prices falling to $6/MMBtu — about $1/MMBtu lower than the current forward curve,” the report said.

“On top of this, the Asian LNG market will be sufficiently supplied with Pacific LNG supply, resulting in Asian LNG prices trading at parity to European spot price.”

The Wood Mackenzie team sees “little risk” that U.S. LNG is going to be shut out in summer 2019, in part because “Europe import dependency continues to increase as indigenous production reduces. And, as more LNG will increase competition in Europe, lower gas prices will spur some additional demand through coal-to-gas switching in the power sector.”

Europe is expected to import an extra 35 bcm of LNG in 2019, which would be 50% more than in 2018. However, Russian exports should remain sustained, said the report.

Russian exports would be in the “range of 170 bcm, albeit a reduction compared to the record level of last year (circa 190 bcm).”

European prices should soften, however, with the Dutch Title Transfer Facility Hub, aka, the TTF, averaging $6.6/MMBtu through to 2019, which would be $1/MMBtu lower than 2018 and the current forward curve for 2019.