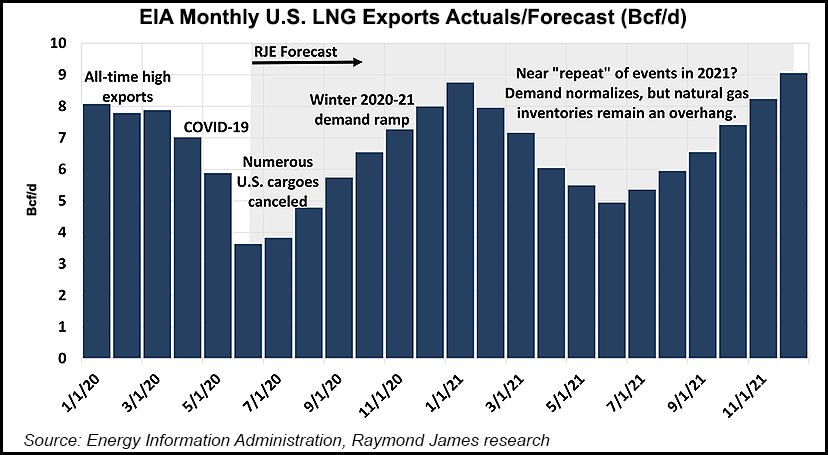 Global gas fundamentals are expected to tighten considerably this winter and over the long term, but U.S. liquefied natural gas (LNG) could face another painful summer in which cargo cancellations mount as early as May.

In a research note released Monday, Raymond James & Associates Inc. analysts said the continued ramp-up of the Chinese economy, lower retail prices in South Korea and nuclear maintenance in Japan all should present tailwinds for the rest of the year for both LNG demand and imports. This supports “a solid rebound” in LNG export utilization rates into winter 2020-21, with the leading indicator of cargo cancellations slowing substantially in recent months.

“We believe U.S. LNG utilization rates pushing back near 90% is realistic,” analysts said.

The Asia Pacific region projects to see modest absolute demand growth in 2021, while Europe and North America “simply normalize” to near pre-pandemic levels, according to Raymond James. On a full year basis, analysts expect 2021 LNG markets to remain around 2 Bcf/d oversupplied globally.

At the low point this past summer, which resulted from an already oversupplied market that worsened when Covid-19 hit, Raymond James said analysts believe the global gas market was oversupplied by 4-5 Bcf/d. In all, around 175 U.S. LNG cargo cancellations were recorded, though roughly 80% took place before September.

“Thus, while early 2021 looks better than that of 2020, the market is still likely to see increased seasonal volatility, in our view. Summer 2021 could look similar to 2020 with cargo cancellations as soon as next May,” said the Raymond James team.

The implied arbitrage between the U.S. Gulf Coast and key benchmarks in both Europe and Asia supports this view, analysts said, with spreads relative to variable costs being marginally positive in winter 2020-21 and winter 2021-22 but essentially breaking even in mid-2021. Further, with the expectation that Henry Hub prices are set to rise in 2021, there may be a modest headwind to inter-continental spreads next year.

“All things considered, the economics are unlikely to drive high utilization in warmer months for the northern hemisphere,” Raymond James analysts said.

That said, the firm, for the fourth time this year, slightly adjusted higher its assumptions for U.S. LNG utilization rates in both 2020 and 2021, reflecting a modest improvement in the pace of recovery in 2020 than previously anticipated. While there are several “cross-currents” at play, the firm pointed out that the United States has added capacity since this time last year. Elba Island was completed in September, Cameron’s Train 3 was completed in August and Freeport’s Train 3 was finished in May.

“Arguably the largest change is in the shape of our export assumptions as we have ‘dialed up’ the seasonality,” Raymond James said.

The firm plans to continue monitoring the easing of lockdowns, as well as the success in containing the speculated second wave of the pandemic. It also plans to keep track of the competitiveness of spot LNG cargoes, weather-driven winter demand in the northern hemisphere and inventory trends, particularly in Europe, for the second half of 2020 through 2021.

Nevertheless, Raymond James remains bullish on U.S. gas. The firm said the upward trend for gas could be even higher than what is currently reflected in the New York Mercantile Exchange futures strip, and potentially closer to its call for Henry Hub to exit 2021 at $4.00/MMBtu. “There’s plenty of room for our bullish gas price call to hold directionally even if LNG modestly disappoints in 2021,” analysts said.

Beyond 2021, they continue to see China and India driving major growth, offsetting Japanese and Korean market share competition. Analysts pointed out that the International Energy Agency foresees only around 75 billion cubic meters (bcm) of “lost growth” from 2019 to 2025, equating to a 1.5% compound annual growth rate during the same period.

“If gas/LNG prices remain low, it is possible that price-sensitive Asian buyers render these forecasts conservative,” Raymond James said. “Additionally, we believe there is some credence to the notion that the respiratory pandemic will energize efforts towards natural gas away from coal and liquids.”

Furthermore, Covid-19 is likely to have “significantly tightened up” the 2023-2025 global LNG landscape given recent project delays and the resulting slowdown in new LNG supply in the next few years, according to the firm. In addition to project delays, some U.S. projects also have found ways to scale down the initial scope.

Goldman Sachs researchers agreed with that theory, reducing their global supply forecasts by 10 million metric tons/year (mmty) on average in 2022-2025 compared with pre-Covid expectations. The delays are most visible in Qatar, the United States, Nigeria and Russia.

Qatar Petroleum postponed the first expansion of North Field LNG from 2024 till 2025 due to a delay in the bidding process. This has resulted in 3 mmty and 8 mmty lower Qatari supplies in 2024 and 2025, respectively, according to Goldman Sachs. Likewise, Nigeria’s latest announcement for the seventh production unit to start in 2025, a year later than its previously announced start-up date, has lowered supply in 2025 by 2.8 mmty.

In the United States, researchers removed the fourth train at Freeport from their base case, as the preliminary agreement signed in 2018 with Sumitomo for 2.2 mmty expired this summer without being finalized. The first two modules at the proposed Plaquemines export terminal also have been pushed back to November 2024 since the project has not yet been sanctioned.

“Together with our recent downward revision of U.S. liquefaction utilization to better reflect observed flows, this has resulted in lower supply of 5 mmty on average in 2022-2025 compared to our February expectations,” Goldman Sachs said.

With other delays in Russia, Indonesia and elsewhere, researchers said by the end of 2021, they expect only a 14 mmty increase in liquefaction capacity, after an expected 21 mmty increase in 2020. “Assuming normal winter weather, this contributes to our view that the global LNG market is gradually coming back into balance through next year.”