The U.S. exploration and production (E&P) sector is increasing its capital spending in 2022 for the first time in four years, while Canada is set to remain near multi-decades lows, according to Evercore ISI. 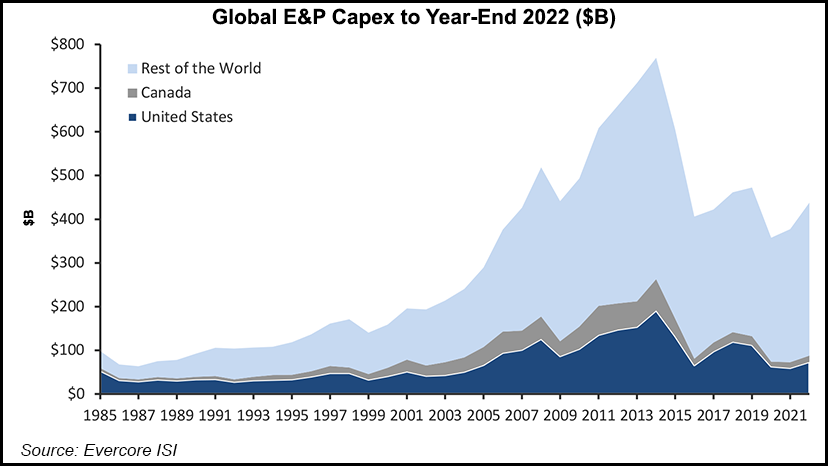 A “stronger rebound” in North America (NAM) is set to lead the way, with international capex trailing slightly. Overall, global spending should make a big splash, “recovering from the 24.3% collapse in 2020 to within 7% of 2019 levels.”

“While North America is turning the corner to lead with 21% growth, international is accelerating to 15% growth, with ambitious capacity growth targets established for leading Middle East companies, while both Latin America and Africa also rebound from very low bases,” West said.

For the first time in four years, international growth should lag NAM, which has contracted for three straight years, according to Evercore. The Middle East is projected to be the second highest spender in 2022, with capex jumping by 19.5%. Meanwhile, Latin America and Africa “come off a low base at more than 40% below their 2014 peak.”

Onshore operators in the United States are up against a wall, faced with “declining well productivity and increasingly challenging geological conditions limiting production growth,” Richardson said. In addition, the U.S. privates are playing “an outsized role.” Private E&Ps today have about 60% of the U.S. land rig count under their control, but they only account for 13-15% of Evercore’s 2021/2022 domestic capex estimates.

Competition for upstream dollars by renewable energy is not a big concern, “as it won’t be the first time this is happening,” West said. “Europe has been investing in renewables for decades, and in the U.S., the Department of Energy has distributed billions in clean energy stimulus over the past several decades with more on the way.”

Some companies may be allocating 10% of their capex in 2022 to renewables and low-carbon resources, “but oil and gas is widely perceived as the primary fuel to power the economy. Moreover, we believe traditional oil and gas companies will be fundamental to the success of the energy transition and are encouraged by a confluence of events that are driving digitalization of the oilfield and the energy transition.”

Over the past month, said West, analysts have held discussions or analyzed financial and strategy documents for around 270 oil and gas companies to assess the outlook.

The “risk is moderate” for 2022 spending. The “generally positive trends in commodity prices may have stalled due to the latest Covid strain, but we expect Omicron to have a limited impact on mobility and global demand.

“With the recent pullback, oil prices have fallen in line” with the survey’s West Texas Intermediate oil price assumption of $70/bbl. Oil prices “are in a sweet spot between where budgets will reset higher at $75 and lower at $65.”

Cash flow remains the key swing on spending, but y/y changes in oil and gas prices “as determinants for E&P spending plans suggest a subtle shift is underway in operators’ hydrocarbon targets.”

Meanwhile, oilfield services costs have become a bigger concern for E&Ps, according to Evercore’s survey.

“Operators are beginning to increase exploration budgets and expect service pricing to broadly increase, led by labor, tubulars and transportation but also fracturing/stimulation, drilling and other services,” according to the firm. “While E&Ps remain hesitant to test and adopt new technologies, they are increasingly willing to switch and pay up for services or technologies that lower carbon emissions.”

Evercore economist Ed Hyman also is finding more to like than not about the U.S. economy. He has tracked more than 600 U.S. stimulus initiatives since the start of the Covid-19 outbreak last year, Evercore noted. Hyman determined that the “massive and unprecedented amount of stimulus remains underappreciated.”

In particular, the U.S. economy “may be stronger than any of us realize.” For example, the Federal Reserve Bank’s balance sheet “has nearly doubled in less than two years,” and the nearly $2 trillion Congressional reconciliation package could soon follow the proposed $1 trillion infrastructure bill.

Nominal U.S. gross domestic product (GDP) growth “is on track for a 14% quarter/quarter annual rate of increase,” according to Evercore. Because of the “lagged impact of monetary stimulus,” Evercore is forecasting growth to remain elevated in 2022. The firm’s estimate of 7.5% nominal U.S. GDP growth includes 4.5% real growth and 3% price inflation.