Global energy investments are set to rebound by nearly 10% this year to $1.9 trillion, reversing the 2020 decline, but the energy transition is moving more funds toward electricity and renewables and away from fossil fuels, according to the International Energy Agency (IEA). 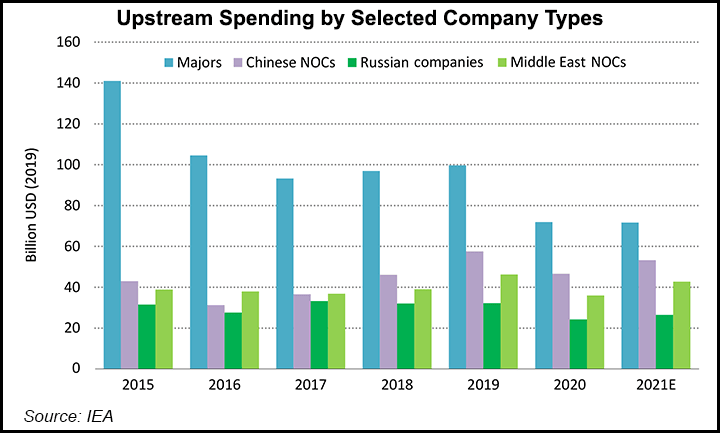 Researchers said investments are returning to pre-crisis levels, with a shift continuing toward electricity. In fact, this year is targeted to be the sixth in a row that investments in the power sector exceed those in traditional oil and gas supply, according to the IEA’s World Energy Investment 2021 report.

The global power sector, which saw flat investments in 2020, is set to see funding this year climb to its highest level ever, up about 5% to more than $820 billion. Renewables are forecast to account for 70% of the total.

“The rebound in energy investment is a welcome sign, and I’m encouraged to see more of it flowing toward renewables,” said IEA executive director Fatih Birol. However, funding directed to alternative energies needs to triple by 2030 to reach net-zero emissions by 2050, he noted.

While renewables dominate, coal remains in the picture, driven by China and other Asian economies, researchers noted.

Upstream oil and gas investment is expected to rise by about 10% in 2021 as companies recover financially from the shock of 2020, but their spending remains well below pre-crisis levels.

Research also highlighted the diverging strategies among different oil and gas companies. The majors are holding spending flat on aggregate in 2021, despite recovering prices. Meanwhile, some national oil companies are stepping up investment, raising the possibility of increased market share if demand continues to grow.

IEA’s researchers also pointed to Qatar’s decision to move ahead with the world’s largest liquefied natural gas (LNG) expansion. It would include carbon capture technologies in the investment, which “is a strong signal of its intent to maintain a leadership position in LNG,” researchers noted.

“There are signs in the latest data that spending by some global oil and gas companies is starting to diversify,” IEA noted. Last year researchers said only around 1% of capital spending by the industry was going toward alternative energy investments. Project tracking to date this year, however, “suggests that this could rise to 4% this year for the industry as a whole, and well above 10% for some of the leading European companies.”

The United States could see further momentum too, if President Biden’s infrastructure makeover and related executive orders are followed, which include actions to combat climate change, according to the IEA.

Still, even as spending increases for renewables, which this year should be up around 7%, growth in these capital expenditures has lagged changes in financial markets.

“Clear policy signals from governments would reduce the uncertainties associated with clean energy investments and provide investors with the long-term visibility they need,” Birol said. IEA has modeled a scenario that “shows there are huge opportunities for companies, investors, workers and entire economies on the path to net zero. Governments have the power to unlock these broad-based benefits.”

Meanwhile, the road to net zero is paved with less taxes for global economies geared to oil and natural gas, according to Rystad Energy. New research shows that global government income from oil and gas taxation in 2020 declined to a multi-year low of around $560 billion. Before Covid-19, global oil and gas taxes usually exceeded the $1 trillion mark.

However, the accelerating energy transition “will cause this source of state income to shrink and never again” surpass that mark, Rystad analysts said. This year may be the last that taxes approach $975 billion, assisted by high oil prices.

“As the energy transition ramps up, countries highly dependent on tax revenue from the upstream industry may have no other option than to diversify their economy to sustain state budgets,” said Rystad’s Espen Erlingsen, head of upstream research. “This is clearly the rational course for them to follow, but there are inherent challenges in the form of insufficient economic and legal institutions, infrastructure and human capital.”

Using Saudi Arabia as an example, Rystad said about one-half of the government’s take is at risk toward 2050, while total tax income from oil and gas made up 27% of the country’s gross domestic product (GDP) in 2019.

Algeria, Iraq, Kuwait and Libya, which are dependent on tax revenue from the upstream industry, together garnered around 40% of GDP in 2019 from oil and gas tax revenue.

“In these countries, about 50% of the government take is at risk, meaning that this group is the most exposed to revenue risk as a result of the energy transition,” according to Rystad.