In the next five to seven years, natural gas prices will trend upward as global oil prices move down, the chief economist for The CME Group, Blu Putnam, told an energy industry meeting in Chicago on Tuesday. 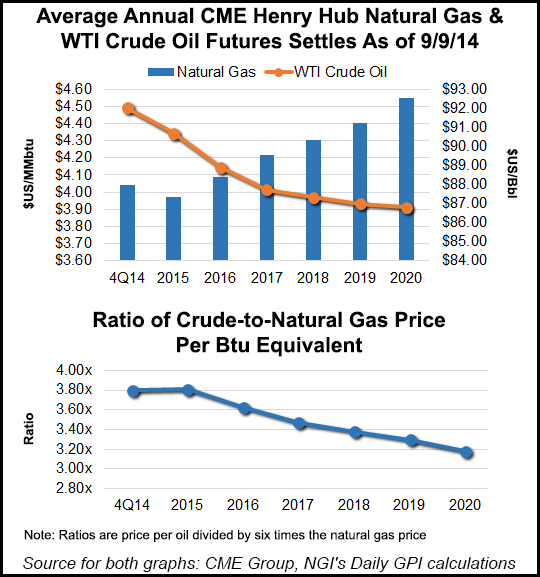 Predicting declining oil consumption and rising gas demand globally, Putnam said the U.S. gas boom will slow and gas prices are “very unlikely” to be anything like they are now in a few years. He offered these and other macroeconomic observations as part of keynote remarks at the LDC Gas Midcontinent Forum.

“In the United States we’re going to still be in an energy boom, but don’t get too carried away by that,” said Putnam, adding that eventually “there will be a little tapering off” in gas production, particularly in many of the basins other than the Marcellus. He added that some of this decline can be reversed longer term by things like deepwater hydraulic fracturing (fracking) in the Gulf of Mexico.

“We don’t know for sure where the long-term production will be, but for the next three or four years, there will be a little de-acceleration,” Putnam said.

Part of the global context for U.S. natural gas is the somewhat unprecedented wide spread that has developed and persisted between U.S. oil and natural gas prices in which gas continues to be a bargain compared to oil. Putnam called that the “Btu gap,” and he sees that narrowing in the next five to seven years. “We’re going to get some of this price difference [between gas and oil] eliminated,” he said, adding that developments in various other parts of the world, such as the Middle East and Japan, will help contribute to this trend.

CME futures trades also hint that natural gas prices will move closer to crude prices in the coming years. According to NGI calculations based on Tuesday CME settlement data, the ratio of crude oil and natural gas prices on a Btu basis is expected to fall from 3.79x in the fourth quarter of 2014 to 3.18x in 2020.

“Japan is considering restarting some of its nuclear units, and if it does that, the price of gas over there will fall,” he said. “There is stuff happening everywhere. The events will take some time to develop, but they are all happening. If I have a message here it is that the long-term price for natural gas is about to move, and it will move in the next three to five years, but it is still highly uncertain which direction, although the trend now is little bit more toward up.”

Putnam said what eventually is going to happen in China and its mega gas deal with Russia, for which there are not publicly disclosed prices, is “what keeps him up at night.” What doesn’t concern him is the Middle East, though, because unlike after the first U.S. Persian Gulf War, when the Iraqis destroyed some of the nation’s oil production, all of the opposing factions today agree on one thing: they want to keep oil production up, providing revenues for their cause.

“The China-Russia situation, I think, requires a lot of watching,” said Putnam, adding that the historic use of the price of North Sea oil for European gas deals is no longer relevant with the declining production in that area.

In response to a question about what gas/oil price convergence means, Putnam said his projection is for it to come from a combination of global oil prices dropping and gas prices rising, although he would not speculate how much each fuel price would move. “It is very obvious that the two prices are going to converge over the next five to seven years,” he said. “It is not as obvious how this convergence will take place.

“It does appear to me that the global dynamics would tell us that oil is more oversupplied than natural gas, so its prices should drop. And natural gas consumption (globally) seems to be picking up faster, and that would suggest higher prices. Also the arbitrage of natural gas between the rest of the world and the United States suggests U.S. prices will experience an upward pull, so I am going to go with natural gas prices rising and oil prices [globally] falling.”