After averaging $84/bbl in October, Brent crude oil spot prices are on track to remain near current levels through the end of 2021, according to updated forecasting from the Energy Information Administration (EIA). 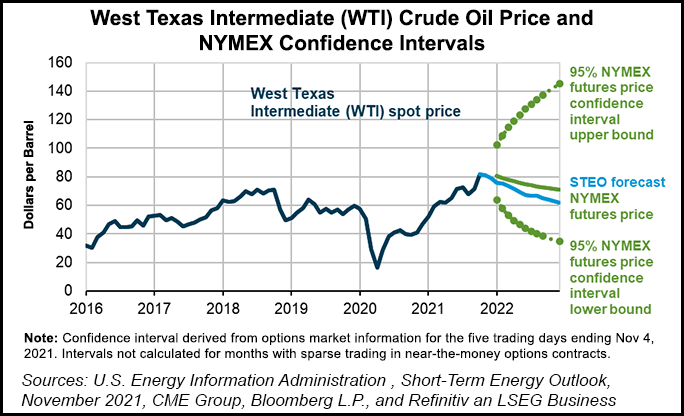 The agency said in its latest Short-Term Energy Outlook (STEO), published Tuesday, that it expects Brent crude spot prices to average $82 during the fourth quarter. The $84 October Brent average represented a $9 sequential increase over September prices.

EIA said it expects Brent prices to soften to $72 on average in 2022 as production growth — from the Organization of the Petroleum Exporting Countries and its allies, from U.S. tight oil and from other sources — outpaces slowing growth in global consumption.

“We revised up our forecast for consumption of petroleum and liquid fuels for the fourth quarter of 2021, partially as a result of fuel switching from natural gas to petroleum in the electric power sector in parts of Asia and Europe” resulting from soaring natural gas prices globally, researchers said.

“Growth will come largely as a result of onshore operators increasing rig counts, which we expect will offset production decline rates,” researchers said.