Strong demand for oil and refined products, as well as the startup of a new diluent recovery unit (DRU), fueled earnings growth in 2021 for Gibson Energy Inc., a Calgary-based liquids processing, storage and marketing firm. 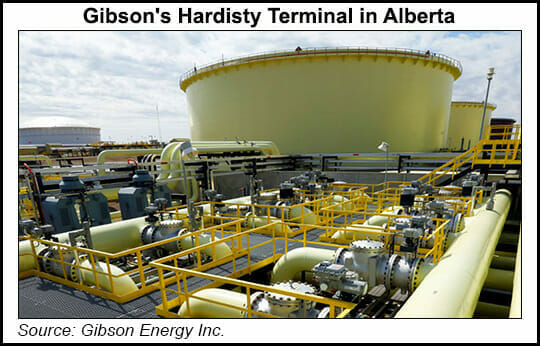 Gibson started operations in December on the DRUbit, with the facility operating at or above its nameplate 50,000 b/d of capacity. Gibson and Houston-based US Development Group LLC (USD) located the plant at the Hardisty liquids trading hub in Central Alberta to make safe oilsands cargoes for railway delivery. ConocoPhillips booked the capacity.

The plant strips out for reuse gasoline-like condensate that dilutes northern bitumen production for pipelines to Hardisty. The resulting DRUbit concentrate is transported by train to a USD terminal at Port Arthur, which is southeast of Houston near the Houston Ship Channel.

Transporting DRUbit by Rail (DBR) is projected to reduce carbon emissions nearly 20% relative to diluted bitumen by rail alternatives and by about 30% compared to dilbit by pipeline alternatives, according to Gibson.

“This DBR network is highly scalable and is well-positioned for future commercial expansions,” CEO Steve Spaulding said. “USD and Gibson continue to pursue commercial discussions with current and potential producer and refiner customers to secure additional long-term agreements to support future expansions” at the DRU and the Port Arthur terminal.

The recovery of demand for oil and refined products showed in the firm’s marketing performance as well as industry use of its field facilities. Gibson reports in Canadian dollars (C$1.00/US 79 cents).

“During the year, we were able to resume the sanction of incremental growth projects,” Spaulding said. Initiatives include a biofuels blending plant and new 435,000 bbl oil storage tank at the Alberta capital, Edmonton.

The firm also advanced sustainability, as well as environmental, social and governance initiatives, setting expanded 2025 and 2030 targets and adopting a net zero target by 2050.