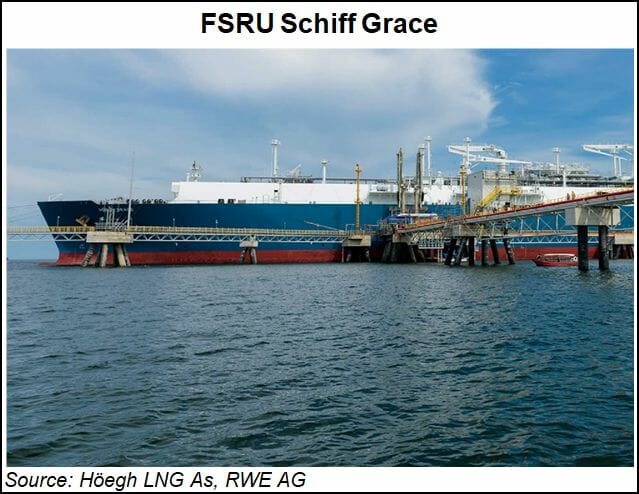 RWE and the United Arab Emirates’ (UAE) state-owned ADNOC agreed to a multi-year supply contract for liquefied natural gas starting in 2023, the firms disclosed. As a part of that memorandum of understanding (MOU), ADNOC is expected to ship a 137,000 cubic meter LNG cargo to Germany which should arrive in the last weeks of the year.

The cargo could also be the first unloaded at Elbehafen LNG, currently under construction at the coastal port town of Brunsbüttel, near Hamburg, Germany. Elbehafen LNG will operate one of the two floating storage and regasification units (FRSU) RWE has chartered to increase import capacity in Germany.

Sultan Ahmed Al Jaber, minister of industry and advanced technology for the United Arab Emirates, said the signing of the country’s first LNG contract with a German customer was a sign of its solidarity with Germany and western Europe, and ADNOC’s goal of growing the global availability of LNG.

“As a customer-focused business, ADNOC is accelerating its gas production and processing capacity to meet growing global demand for LNG, a key fuel, both in today’s energy mix, and a critical fuel in the energy transition,” Al Jaber said.

German bank Kreditanstalt fur Wiederaufbau, along with a subsidiary of NV Nederlandse Gasunie, and German utility RWE signed an MOU to construct and operate the LNG terminal in Brunsbuttel in March.

Both of the FSRUs chartered by RWE are owned by Höegh LNG As and capable of receiving up to 170,000 cubic meters of LNG at a time.

RWE also agreed to explore renewables projects with the UAE’s state-owned clean energy company, Masdar. Both firms disclosed that the agreement will be focused on expanding offshore wind portfolios with investments in “a number of different countries.”

RWE and other German utilities have been securing a whirlwind of alternative energy supply agreements to reduce dependence on Russian natural gas since the February invasion of Ukraine. Germany, which is Europe’s largest economy, has been able to fill its natural gas storage to above-average levels, mostly thanks to a massive wave of LNG imports from the United States and other partners, but its existing infrastructure has been strained.

In an effort to increase regasification capacity, Germany has contracted five FSRUs so far, with plans to possibly secure six in total.

On Thursday, Uniper SE COO Niek Den Hollander said the utility’s terminal in Wilhelmshaven could be operational by the end of the year. Uniper, which procured an FSRU from U.S. firm Excelerate Energy Corp., has also inked additional supply deals this year. Some of those deals are contingent on Uniper investing in further import infrastructure, which management has said could be finalized by March.

The government of Lower Saxony in Germany also confirmed on Sept. 26 that it had approved funding and early construction at the LNG jetty for a future terminal at Stade. The port, which will serve ships unloading at the future Hanseatic Energy Hub, could be completed by the end of 2023, officials said. It was originally planned to be operational by 2026.