Chancellor Olaf Scholz’s pledge for Germany to become independent from Russian energy imports “as soon as possible” is said to be supported by ambitious plans, including starting liquefied natural gas (LNG) imports by 2023. 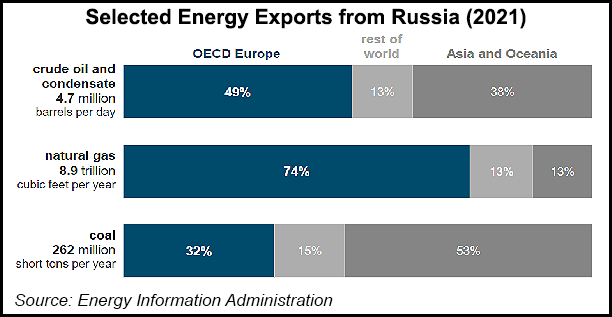 Germany’s Economy and Climate Minister Robert Habeck said at a recent news conference that one of Europe’s largest energy-consuming nations is aiming to cut oil imports in half this year, end coal deliveries by this fall and gain independence from Russian natural gas by 2024.

Europe’s shift away from Russian gas is happening at an “insane pace,” Habeck said. The European Commission (EC) has laid out a plan for the continent to gain independence for Russian gas before 2030.

“We have made intensive efforts in recent weeks, together with all relevant stakeholders, to import less fossil energy from Russia and broaden the supply base,” Habeck added.

The 2024 gas goal requires a “big joint effort,” said Germany’s Ministry for Economic Affairs and Climate Action in a report released Friday. Reducing Germany’s reliance on Russia will be challenging. On average, Russian gas imports accounted for 55% of the country’s gas demand.

However, imports of Russian gas have dropped to 40% of demand in 1Q2022, largely due to Russia’s suspension of spot supplies, according to the ministry.

Germany’s plan to partially replace Russian pipeline gas with LNG imports is ambitious, considering Germany lacks the infrastructure to import LNG, but the government is pushing ahead with plans to build out import infrastructure.

German bank Kreditanstalt fur Wiederaufbau, along with a subsidiary of NV Nederlandse Gasunie and German utility RWE signed a memorandum of understanding in early March to build an LNG import terminal at Brunsbuttel with a capacity of 8 billion cubic meters (Bcm) per year that has a tentative 2026 start-up. “Other sites are being considered on an ongoing basis’, the ministry said.

“Brunesbuttel appears to be making rapid commercial progress as they just signed on Shell,”  Rystad Energy analyst Kaushal Ramesh told NGI. “Four years is a believable timeline, considering liquefaction plants, much more complex than regasification terminals, can make it faster than that.”

FSRUs To The Rescue

Germany has taken options on three floating storage and regasification units (FSRU). RWE and Uniper SE are negotiating the leasing contracts, which are “already in the final stage,” according to the ministry’s report.  Germany is considering potential sites in the North Sea and Baltic where they could be deployed by next winter, according to the report.

“In general FSRUs can be quite fast to deploy,” Ramesh added, “with existing infrastructure the unit can commission in less than a year, so there is some element of speed-of-deployment that makes FSRUs particularly suited to Europe’s current situation.”

According to Rystad, 9 out of 46 operating FSRUs don’t have a long-term charter. But Ramesh said it is “always possible to out-charter any one of those these days…For the right price,  availability is probably no bar.

“They also work out to be the net cheaper option than onshore terminals for lease terms up to six years, again a good solution for Europe.”

Talks were held between the German government and LNG exporters prior to the report’s publication. Germany agreed to a supply contract with Qatar five days before the unveiling of the report. Habeck gave no details about the volume or term of the contract. Qatar is expected to double LNG production by 2025.

On the same day Germany announced its plan to reduce Russian energy imports, the United States also pledged to send 15 Bcm of LNG to Europe by the end this year.

By this summer, the share of Russian gas imports to Germany is estimated to fall to 24%, according to Habeck, who said the private and public sectors would work together to look at ways to reduce Russian pipeline imports.

Germany has plans to increase the use of renewables and become more energy efficient, including  making “quick wide-ranging revisions of the Renewable Energy Sources Act,” first introduced in 2000. The Offshore Wind Energy Act is also under revision to speed up the expansion of offshore wind energy. The Buildings Energy Act would also tighten standards.

“The aim is to look where energy consumption can be reduced as quickly as possible,” Habeck said. From 2024, renewables would provide 65% of the energy for all newly installed heating systems, while gas-fired heating systems would be switched over to heat pumps.