Germany’s government has moved to secure supply for its two developing LNG terminals with a tentative agreement between some of the country’s largest energy firms. 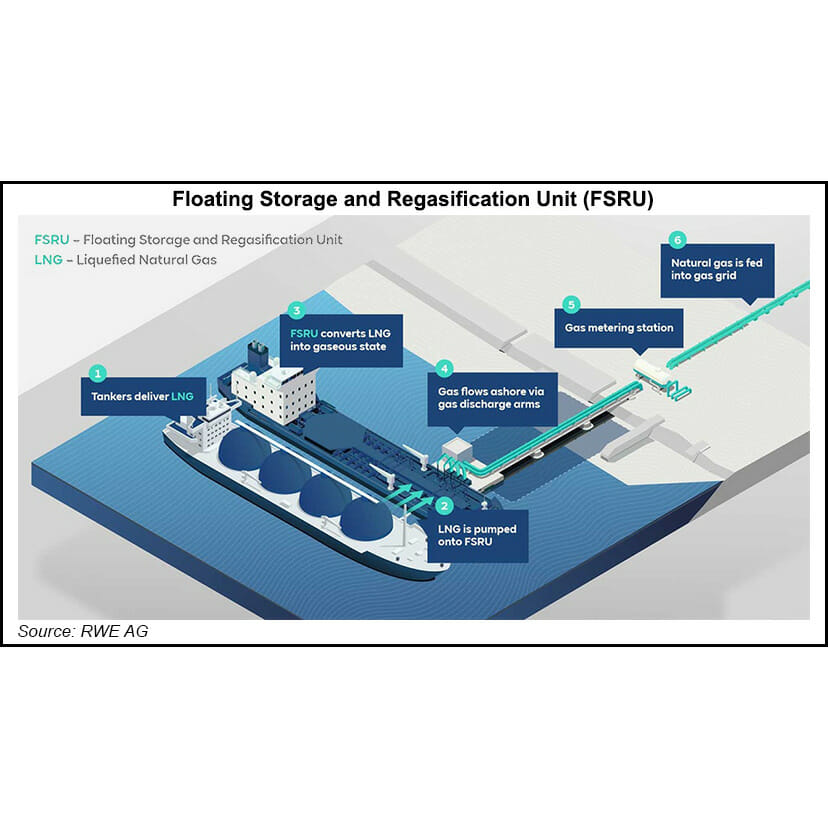 A finalized agreement currently underway would help secure some of the 12.5 Bcm/year capacity of LNG that could be added with the two floating storage and regasification units (FSRU) currently in development, Habeck said.

The facilities at Brunsbuettel and Wilhelmshaven could be the first of Germany’s four chartered FSRUs to become operational, according to RWE and Uniper. RWE has said the Brunsbuettel terminal could begin operations by the end of the year. Construction has started at Wilhelmshaven, with Uniper estimating a start of operation by winter.

RWE and EnBW have both inked supply and purchase agreements for offtake from U.S. LNG projects since Russia’s February invasion of Ukraine.

Port-side terminals have also been planned for Stade and Lubmin. Germany revived approval for the Hanseatic Energy Hub (HEH) at Stade in March, which was quickly followed by a 3 Bcm/year offtake agreement from RWE.

Germany’s government has become increasingly involved with the country’s energy industry over the past few months to secure energy in the face of dwindling Russian supplies. The government recently agreed to take a 30% stake in Uniper to help the energy giant remain solvent and approved additional annual natural gas charges to utility customers.

The announcement comes as most of western Europe is still rushing to raise natural gas storage levels amid near-record LNG prices.

Germany’s Federal Network Agency (FNA), which regulates the gas market, reported Tuesday that total natural gas storage levels in Germany were at almost 77%. The storage level at the country’s Rehden facility, one of the largest in western Europe, was at around 56%. Russian pipeline imports remain low, with Nord Stream 1 still at 20% of capacity.

The Dutch Title Transfer Facility (TTF) price for LNG in September rose from $65.663/MMBtu on Monday to more than $67/MMBtu on Tuesday. The TTF has risen almost $10 week/week.

Analysts with European trading firm Energi Danmark wrote that the TTF’s rise was expected to continue into the week “as supply from Russia is still subdued” and countries like Germany are still “eager to fill storages” while enduring a heat wave. Despite a relatively quiet news cycle concerning Russian flows, analysts wrote “uncertainty and fears” were still driving markets upward.