The upcoming winter season in the Lower 48 is expected to be warmer than the last one, but even if the polar vortex returns for a sequel, many factors would likely keep prices in check and the increased demand for natural gas from outpacing supplies in the market, according to analysts at Genscape Inc. 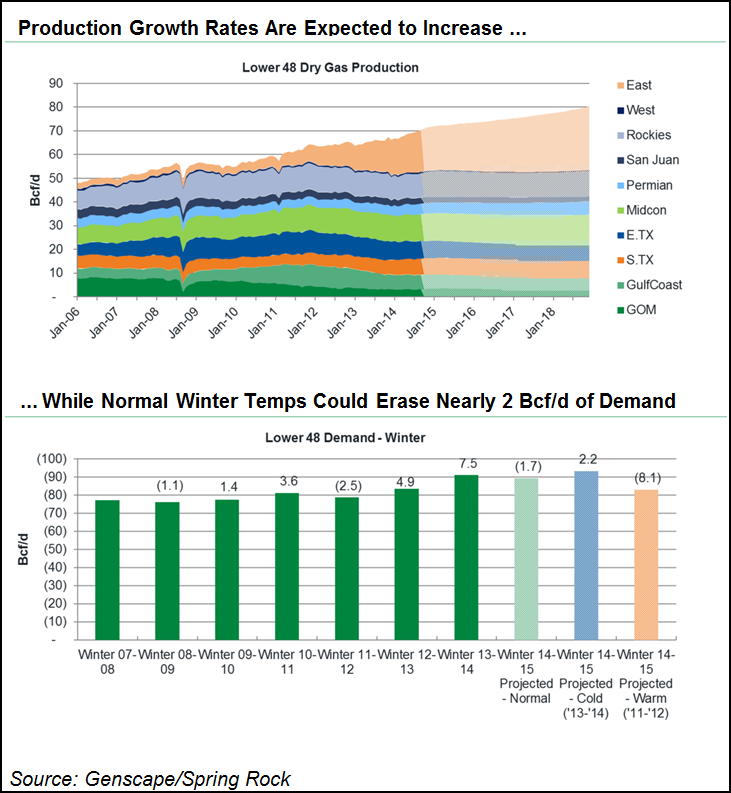 “Everybody’s memory is quick to revert back to last winter,” Rick Margolin, senior analyst for Genscape, said during a webinar Thursday. “Obviously, last winter was extremely cold, but we shouldn’t forget how the winter of 2011-2012 was just the opposite. It was one of the warmest winters we’ve seen in recent history and it left the following summer gas market in an oversupply situation.

“Due to fundamental shifts that are occurring and have been occurring in the gas market, we see the potential for another one of those scenarios to set up.”

Margolin said Genscape forecasts that total gas production in the Lower 48 during the 2014-2015 winter season will be about 5.1 Bcf/d greater than last winter, with the bulk coming from the Appalachian Basin — specifically, the Marcellus and Utica shales. He added that the increase in production was a trend Genscape expects will not only continue, but could potentially accelerate.

“In the future market, the East will continue to be the big driver of growth,” Margolin said. “This winter, we expect that production out of Eastern markets will increase by 3.5 Bcf/d, winter over winter [w/w]. But it’s important to also note that the Northeast is not just the only driver of production growth.

“We are seeing production growth in a variety of basins, almost coast-to-coast. A lot of the production does continue to be driven by the pursuit of high-value liquids and crude oil, and as a result we are getting associated gas volumes in places like the Eagle Ford and Permian. And the pace of that pursuit for those liquids is such that it is enough to grow gas volumes in those areas.” He added that Genscape was also seeing a “restoration of production” in the Gulf of Mexico (GOM) and continued growth in the Bakken Shale.

Margolin conceded that the production forecast had its risks, and that it trended to the high side. “Estimating Northeast production can be challenging because there is such a large backlog of wells that have been drilled but not completed that are waiting to come online,” he said. “In addition, there is a fairly large inventory of wells that have been tied in, but operating at choked-back rates.”

Based on normal winter temperatures, imports from Canada were expected to fall by about 1 Bcf/d w/w, despite TransCanada Corp. adjusting its tolling structure on its mainline to lure back former shippers that had left the system (see Daily GPI, April 11).

“While we do expect that TransCanada’s tolling adjustments will enable a little bit more gas to flow into the Lower 48 market than history would suggest, the return to normal winter should probably wipe out some portion of imports from Canada,” Margolin said.

Meanwhile, Genscape projects that U.S. natural gas exports will grow 0.2-0.3 Bcf/d, compared to last winter. “Mexican gas production has been relatively stagnant to declining in many areas, and Mexican demand has been growing,” Margolin said. “The demand has been driven by the need for new power generation, as well as a relatively healthy industrial economy. We do not expect any reversal or halt to that trend, in fact with expect that trend to continue and actually accelerate.”

According to Margolin, Genscape projects the Lower 48 market will have an additional 3.9 Bcf/d in supply available, compared to last winter. He called that a “bullish prospect.”

“We are seeing very clear indications of structural shifts in the winter demand market,” Margolin said. “At normal temperatures, in almost every single month, we are seeing more gas being consumed than the previous winter. We see that all of rescom [residential and commercial], industrial and power is contributing to those shifts, but rescom seems to be driving the most radical changes. We’re seeing a lot of fuel switching in the rescom sector.

“If we expect that temperatures this winter come in at normal levels — even in spite of the fact that we have structural shift in the demand market — demand would not be nearly as robust as it was during last winter’s extremely cold level. In fact, if temperatures this winter are normal, then we should expect to lose about 1.7 Bcf/d of demand relative to last winter.”

Margolin added that if the upcoming winter season registers the same temperatures as last winter, demand would grow 2.2 Bcf/d, w/w. “While that growth rate is impressive, and would push us well above 90 Bcf/d, remember we’re still long about 3.9 Bcf/d of supply,” he said.

“Even under an extremely cold winter scenario, that demand growth will not be sufficient enough to outpace the production growth. And as such, even in an extremely cold demand winter, will not be enough to absorb the growing market length. That’s going to have implications for prices not just this winter, but into the future seasonal markets ahead.”

If temperatures mimic what happened in the winter of 2011-12, Genscape predicts the elimination of about 8.1 Bcf/d of demand from last winter.